Bob Holman works with words—spoken and written—and for over many years has shared that work with the community around him.  This evening, GVSHP will recognize his continuing efforts with one of our 2011 Village Awards. In his many years of engagement with the community, Holman has headed up the St. Mark’s Poetry Project, helped in the reopening of the Nuyorican Poets Café in the late 1980s, and founded the nonprofit group Bowery Arts + Science, which educates and assists emerging poets in developing and producing their works. Among many other endeavors, Holman also helped create a vibrant new home for words (and so much more), when he opened the Bowery Poetry Club (BPC) at 308 Bowery in 2002.

For the near-decade that it has operated, the space and its stage have brought the changing styles of thousands of artists to the eyes and ears of eager audience members. The site of the BPC itself, on Bowery near 1st Street, has seen some large scale changes as well. Once the quintessential example of urban skid-rows in popular culture, the Bowery in this section of the Lower East Side has been physically transformed over the decade that the BPC has existed. 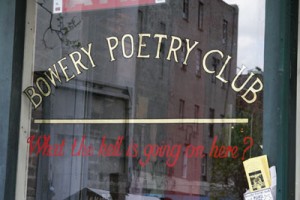 To the north at 315 Bowery, the famed music club CBGBs was forced to shutter its doors and was replaced with an upscale boutique. To the east, the character of the formerly gritty Extra Place has also been significantly altered by condo and commercial development.

Directly across the street from BPC, the block between East Houston and 1st Street has been razed and rebuilt. Now the site of the massive glassed Avalon Bowery Place condominium, the block once housed one of the Lower East Side’s more morbid landmarks, McGurk’s Suicide Hall.

At 295 Bowery stood a five story building that operated as a hotel and that by 1895 housed a dive bar/brothel owned by one John McGurk. In 1899 a total of six young women distraught with their lives in the miserable establishment took their lives by drinking carbolic acid or throwing themselves from the roof. McGurk’s was closed by 1902, but the legend lives on. During the twentieth century, the building served various roles as flophouse and finally a home and workspace for artists, who were eventually forced out in 2005 when this building and its neighbors were razed for the Avalon development.

Despite the changing times (and views out the window of BPC), Holman and the Bowery Poetry Club have kept true to the mission of sharing the art of poetry with the city and the world. We hope you can join us as we honor Bob Holman and the other awardees at our Village Awards and Annual Meeting tonight at 6:30 at the Village Community School.

2 responses to “Words & Art in the East Village: 2011 Village Awardee”