As many of you may have seen or heard, the beloved 9/11 Tiles for America on the fence at Mulry Square were removed two weeks ago in preparation for Hurricane Irene.  The neighborhood group that has been tending to the tiles over the past ten years and had organized their safe removal has been unofficially called “Village Angels.”  Last evening, one of GVSHP’s staff noticed that an abundance of tiles were being stored in a shopping cart on Greenwich Avenue.  Wanting to make sure that they were being safeguarded, we investigated and, of course, the amazing Village Angels had it all under control.

Angelo Rizza, owner of the nearby Rizza Salon, was kind enough to house and safeguard the tiles during the storm.  Now, several Greenwich Avenue businesses including RouRou Cafe and Canine Styles, along with individual Village Angels, are protecting and storing the tiles until they have all been put back up.

This re- installation process began this past Sunday at the conclusion of the Walk of Remembrance for Fr. Mychal Judge.  Firefighters from Squad 18 came to the site in their truck and began hanging tiles.  Soon more neighbors and attendees of the walk followed suit.  Since Sunday, Dusty Berke, Greenwich Avenue resident and one of the founders of Village Angels, has been sitting at a little table in front of the tiles asking passersby to say a prayer, hang a tile, and spread the word.

This memorial will be going on through the weekend, culminating on Saturday with an organic memorial where people are encouraged to come to Mulry Square at any time with candles, guitars, photos, or anything that inspires them, and help hang the tiles.  In a recent Villager article Dusty said that this process will let people “feel that they’re part of the rebuilding process.”   People from all over the world- a choir from Sweden and a woman from Israel who painted more tiles, to name a couple- have been moved to attend Saturday’s memorial.

The outpouring of love is evident when you visit the site today.  Jim Powers, the Mosaic Man, has created a special planter that sits at the corner of the lot and will be bringing a handmade bench as well.  Chris King, a florist in the Flower District who lost many clients in the attacks, donated 20 beautiful potted palm trees to transform the memorial into “an oasis.”  Another man brought a gorgeous, vintage bench adorned with flower vases.

For the past few years GVSHP has been closely following the MTA’s plan to put an emergency ventilation plant on the site of Mulry Square (the MTA owns this triangular plot of land).  If you’re interested in getting involved with Tiles for America, want to learn more, or want to attend Saturday’s Memorial, visit the Tiles for America Facebook page! 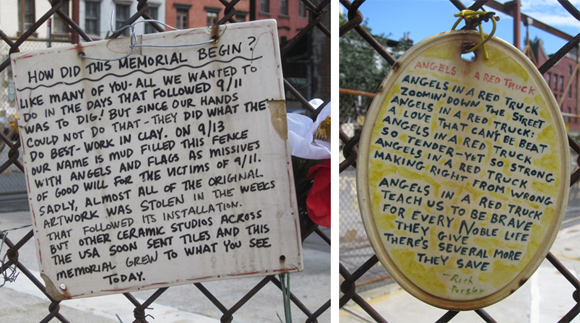