One of the many wonderful things about the East Village is the fascinating layers of history that convey the evolution of the neighborhood. The buildings at 19-23 St. Mark’s Place are an excellent example of how the East Village has changed over time from a wealthy merchants neighborhood, to a landing spot for immigrants, to the launch pad for numerous counterculture and artistic movements. Where else would one find a building which had been townhouses for wealthy families, a ballroom, a gangster hangout, a Polish wedding chapel, and a performance venue with the Velvet Underground as the house band?

The buildings at 19-23 St. Marks Place have been altered over the years diluting the handsome architecture of 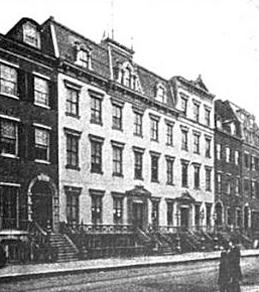 the original designs. They were built as three separate rowhouses in the early 1830s by real estate developer Thomas E. Davis who constructed many of the homes on this block of St. Marks Place. This undated photo at left gives a sense of how impressive the buildings were. We can also see the buildings’ resemblance to two New York City Landmarks in the same block, the Hamilton Holly House   at 4 St. Marks Place (a federal house which GVSHP helped get landmarked in 2003) and the Daniel Le Roy House  at 20 St. Marks Place, below at right.  These early buildings are truly a rarity and unfortunately many are often targets for development. Most recently an earlier building at 135 Bowery was stripped of its landmark status by the City Council. 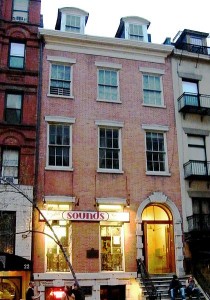 Reflecting the changing demographics of the neighborhood in 1870, the buildings at 19 and 21 St. Marks Place were acquired by the Arion Society, a German music club, one of many that emerged in the East Village as it developed into Kleindeustchland, or Little Germany.  When the Arion Society moved uptown in 1887 all three buildings were purchased by George Erhet and combined into community halls and ballrooms as Arlington Hall.  Arlington Hall hosted everyone from Theodore Roosevelt, when he was a NYC Police Commissioner, to William Randolph Hearst.  One of its most infamous incidents occurred on January 6, 1914 when there was a mob shootout between Jewish mobsters led by Benjamin “Dope Benny” Fein and Italian gangster Jack Sirocco’s crew.  To learn more about some of the East Village’s mob history check out our other posts, here and here.

In 1920 the buildings were acquired by the Polish National Home or Polski Dom Narodowy, a community meeting hall and restaurant.   The building began to transform again as the Beat Generation took root in the Village in the 1950s and 1960s.  A performance space was opened in part of the basement that became a dance venue known as The Dom that attracted mostly black patrons.  In an odd twist of “upstairs/downstairs” a short time later in 1966 Andy Warhol and Paul Morrissey rented the upstairs space to open a psychedelic performance venue  known as the Exploding  Plastic Inevitable with The Velvet Underground as the house band.

Under new management it reopened as the Electric Circus, a chic bohemian nightclub that drew more than 3,000 people to its opening night, according to contemporary coverage in The Village Voice.  As evidence of its “boho chicness,” the interior pictured below, was designed to resemble a 1960s version of a Bedouin tent. 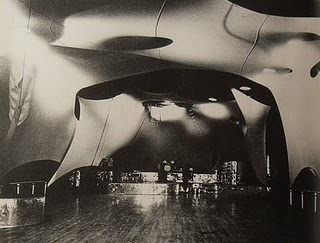 So what happened to the Electric Circus?   One could say it fell victim to the increasingly radicalized activity centered in the East Village in the late 1960s and early 1970s.  In March 1970 a bomb was set off in the middle of the dance floor, injuring dozens.  Though unconfirmed the bombing was attributed the Black Panther Party.  The club never regained its chic reputation and closed in 1971.

In the 1980s and 1990s the building was the All Craft Center, an addiction treatment and housing facility run by local interfaith minister Joyce Hartwell.  A 1998 article from the New York Times recounted Hartwell’s unrealized plans to add a large tower to the facility in the adjoining rear lot.  Not only were Hartwell’s plans unrealized, due to the group’s financial difficulties in 2000 the building was sold to a developer. 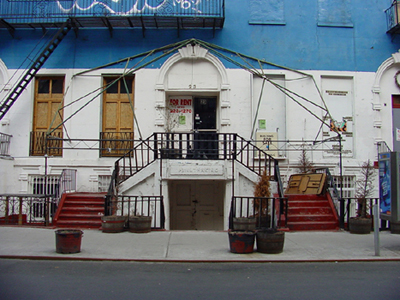 The developer dramatically altered the building, pictured above prior to construction.  The interior was gutted, a new façade was built, two floors were added and the basement through second floors were converted to retail use.  While the history of the building is fascinating its unfortunate alteration underscores the value of landmark designation as a means to protect the architectural and cultural history of the East Village.  At GVSHP we view the East Village historic districts proposed by the Landmarks Preservation Commission as an important first step towards protecting the areas historic fabric.