The iconic early 19th century rowhouses that flank the north side of Washington Square Park are in many a passersby’s mind synonymous with the early history of the neighborhood.  Originally, the whole block looked like this.  Developed in 1833 under the auspices of the Trustees of Sailors’ Snug Harbor, the row was built to house wealthy bankers and merchants from a leasehold which in turn supported retired sailors, considered an early and remarkable example of  both city and social planning.

Originally a potter’s field, or public burial ground for the city’s poor, the open space below the Row was turned into the the Washington Military Parade Ground in 1826 when the City purchased the land, hence cementing it as a well-to-do and desirable place to live (it wasn’t until 1850 that it was turned into Washington Square Park).    The lots of the houses extended through to Washington Mews, where originally stables were situated.  The grandeur and uniformity of the Greek Revival style homes represented a move of the upper class from an increasingly-crowded Downtown up to the area around Washington Square.  Elegant facade details including roof line  balustrades, taenia (or ribbon) molding, white marble stairs leading up to ionic columns flaking the entrance, screens with Greek fret motifs, and a continuous Greek Revival railing running along the sidewalk of this block, further exemplified the stylish sophistication of the Row (all you Mary Kate & Ashley fans will know that the twins named one of their fashion lines “The Row” after this block and, most likely, its claim to chicness). 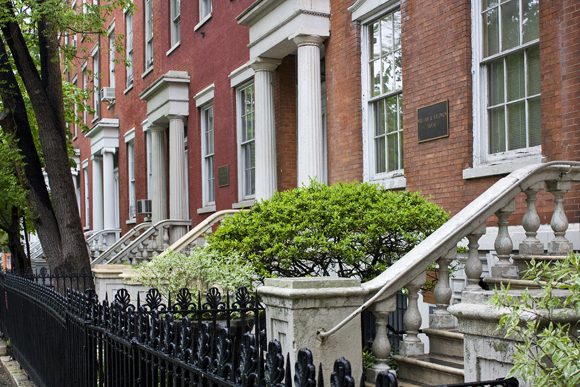 In fact, the Greenwich Village Historic District Designation Report refers to Washington Square North as, “the most important and imposing block front of early Nineteenth Century town houses in the City.”  It goes on to say, “it may well be considered the prototype, in this country, of the monumental Greek Revival Rowhouse.”

Aside from its physical structure, Washington Square North is also well known for some famous historical residents.  The Realist painter and printmaker Edward Hopper, along with his wife Josephine Hopper, lived in a studio on the top floor of 3 Washington Square North from 1913 until the day he died in 1967.  Henry James, one of the 19th century’s most prominent realist writers, often visited his grandmother who lived at 18 Washington Square North.  In fact, he depicts a nostalgic view of the area around the Square in his 1881 novel Washington Square.  Today, the houses belong to NYU.

You may be thinking, of course this is her “favorite thing.”  Who doesn’t love the beauty and history of Washington Square North?  True, but my connection with these buildings goes a bit deeper than that.  The fall of my senior year of high school, while waiting to hear back from colleges including my dream school NYU, I was taking an art class.  We were given an assignment to find a picture of a scene in 2-point perspective and draw it.  I loved the City, so I Google Image searched “NYC houses.”  I selected a beautiful photo of the Row and picked up my pencil.  This drawing became one of my favorites I had done and it was a big hit with my teachers.  Unbeknownst to me, what I was drawing was situated in the heart of NYU, the school I would find out a month or so later that I would be attending.  Further unbeknownst to me, what I was drawing was situated in the heart of the catchment area of GVSHP, the organization I would come to love and work for.  This little high school drawing foreshadowed the next six years of my life.  Now, when I walk by Washington Square North I not only think of its Flemish Bond and intact cornices, but I think how lucky I am to be living out my dreams!