Jonathan Kuhn, a long-time Village resident who is also the Director of Art & Antiquities at the  Department of Parks and Recreation, has curated an exhibition at Central Park’s Arsenal Gallery.  Parkcentric: Photographs from the Museum of the City of New York, 1890-1940, features 68 images of 24 parks by the likes of Berenice Abbott, Samuel H. Gottscho, Jacob Riis, Byron Company, and Jessie Tarbox Beals. The show features historic images of many parks  in our neighborhoods, including Tompkins Square, Union Square, Washington Square, and Sheridan Square. 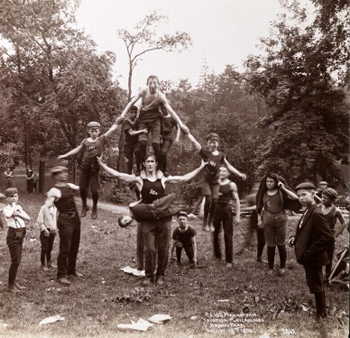 The images cover a critical period in the evolution of the city’s park system — from the social reform movement of the turn of the twentieth century to the WPA era of the 1930s and 40s.

The Arsenal Gallery is located on the 3rd floor of the Parks headquarters at 64th Street and Fifth Avenue. The exhibition is on view weekdays (except July 4th) from 9:00 A.M. to 5:00 P.M., through August 30th.