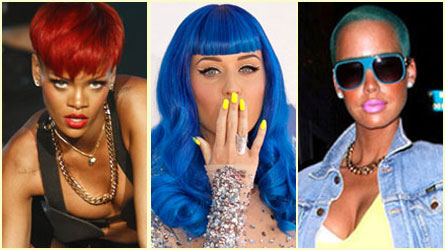 You can’t watch a music video, open a fashion magazine or even walk down the street without seeing the latest fashion craze,  Technicolor hair. Like so many fashion trends (mohawks on toddlers, anyone?) wearing brightly colored hair started as a rejection of mainstream culture, primarily among the youth of the punk scene.  The brand that has been synonymous with offering hair dye in all colors of the rainbow with appropriately eclectic names, like “Purple Haze,” “Bad Boy Blue,” and “Vampire Red,” is Manic Panic.   But some may not know that Manic Panic originated 35 years ago in the East Village as a store offering fashions inspired by the British punk scene, and that famous hair dye, at 33 St. Marks Place by two sisters from the Bronx, Tish and Snooky Bellomo.

Tish and Snooky were key players in the punk scene that took root in the East Village in the mid to late 1970’s. Before opening their shop they sang backup for a band called The Stilletos, with an original line-up that included glam punk icon Debbie Harry. After opening the store they continued to perform at venues like CBGB’s, Max’s Kansas City, and the Mudd Club.  Manic Panic was a favorite shop of Cyndi Lauper, The Ramones, The Dictators, Cher, Sid Vicious, and Bill Murray.

Manic Panic helped to usher in the punk era in the East Village and St. Marks Place in particular. Few stores or venues from that era exits but, we do still have Trash & Vaudeville at 4 St. Marks Place, an individual NYC landmark,  and the Pyramid Club at 101 Avenue A in the recently heard though not yet designated East Village/Lower East Side Historic District. The ladies also became business phenoms and have been featured in Businessweek which referred to them as the, “Martha Stewarts of punk rock.”

Tish and Snooki closed their store on St. Mark’s Place in 1989 due to escalating rent and now operate Manic Panic as an online store and wholesale business. They are still performing as well; in fact you can see them performing tonight at Fontana’s as part of the CBGB Festival .