As most everyone knows, we’re kind of map and statistics geeks here at Off The Grid.  Thus it’s no surprise that a handy little tool put together by WNYC in the wake of the Republican National Convention, mapping the levels of Republican voter registration throughout New York City, caught our attention.

The interactive map (below) appears at first to hold few surprises about the Village and environs — most of the neighborhood has a markedly low percentage of registered Republican voters.  But drilling down a little deeper, we found a perplexing paradox emerges — one which would seem to imply that historic preservation and, more specifically, adaptive re-use, may both repel, and attract, registered Republicans.

Looking at the WNYC map, almost the entirety of the neighborhoods GVSHP covers — the Village, East Village, Hudson Square, NoHo, and the Meatpacking District — are a broad swath of the lightest pink, which means that less than 10% of the registered voters in the election district are registered Republicans.

That’s not to say that our neighborhoods are unique in their low percentage of registered Republicans in predominantly-Democratic New York City.  But most, if by no means all, of the areas of New York City that are largely below the 10% Republican registration threshold are predominantly African-American or Hispanic — two groups with which (with the exception of Cuban-Americans, who are not concentrated in large numbers in New York City) the Republican party has not made many inroads in terms of party enrollment — at least not since the days of Franklin Delano Roosevelt, when African–American outside of the South en masse switched party loyalty to a remarkable degree from Republican to Democratic.

Of course we also see the lightest of pinks throughout Brownstone Brooklyn and related neighborhoods such as Williamsburg/Greenpoint and Victorian Flatbush.  In Manhattan, Chelsea and much of Hell’s Kitchen, the Lower East Side, the Upper-Upper West Side and Morningside Heights, and most of Washington Heights and Inwood are also in this lowest category of Republican voter registration, reinforcing the image of these neighborhoods as Manhattan liberal bastions.

But there are some exceptions in the Village, as well as one interesting political paradox.  Perhaps unsurprisingly a few of the Village’s “gold coast” blocks around Lower Fifth Avenue have slightly higher Republican registration rates and just crack the 10% mark, as does an election district which stretches from the affluent homeowner blocks of the King-Charlton-VanDam Historic District to the Trump SoHo (where the City claims no one “lives,” because it would violate the zoning, but we know better) and the new Zaha Hadid and Philip Johnson-designed luxury towers of lower Hudson Square.  The South Village blocks near Our Lady of Pompei church, and some of the Village’s more picturesque streets like St. Luke’s Place and Morton Street, also just barely pierce the 10% Republican threshold.

The most surprising paradox of the map, however, which is not readily apparent from a quick view, is that the election districts with far and away the highest and the lowest percentages of registered Republicans anywhere in our neighborhoods can be found right next to each other in the Far West Village, an area typically associated with artists, left-leaning politics and high Democratic turnout.  And these most Republican of election districts in the Far West Village are NOT the ones containing the flashiest and most expensive new waterfront high-rises like the Meier Towers or Superior Ink, as some might assume.

Election District 66110, bounded by West, Bethune, Washington, and West 11th Streets, has only 15 registered Republicans out of 748 registered voters, or roughly 2% — the lowest not only in our neighborhoods, but one of the lowest anywhere in Manhattan or all of New York City.  But by contrast, just a few blocks away, Election District 66114, bounded by Gansevoort, Jane, Washington and West Streets, and Election District 66013, which lies between West 10th and Barrow, Weehawken and Greenwich Streets, have 15.3% and 15.2% Republican registration respectively.  While relatively unremarkable for New York City as a whole, these are by far the highest percentages of registered Republicans of any election districts in our neighborhoods.

While these two Far West Village election districts have relatively unremarkable rates of Republican registration as compared to much of the rest of New York City, it’s still striking that the percentages are almost eight times greater than those in the neighboring 66110 district.  What’s even more striking, in some ways, is when one looks at where the residents of these somewhat politically divergent election districts actually live, and here the paradox emerges.

By far the majority of residents in each of the three election districts live in large industrial complexes which were, early in the adaptive re-use movement’s history, converted to residential use.  Each is landmarked, each is critical to the history of the development and evolution of this part of town, and GVSHP has a long history of working with each.

In the 2% Republican 66110 Election District, by far the majority of residents live in Westbeth, the former Bell Telephone Laboratories which were converted in the late 1960′s into the country’s first subsidized artists housing and the first large-scale example of adaptive re-use of an industrial building for residential use (most, but not all, of the remainder of the district’s residents live in a section of West Village Houses, also originally an affordable housing complex which resulted from Jane Jacobs and other Villager’s victory against Robert Moses’ high-rise urban renewal plans for the West Village, substituting modestly-scaled “infill housing”).  GVSHP has a long history with Westbeth, including working to get it landmarked in 2011, and listed on the State and National Registers of Historic Places as well as holding a first-ever artists loft tour there in 2010; find out more HERE.

Most of the residents of the 15.3% Republican 66114 Election District live in what is now called the West Coast Apartments, converted to residences in 1979 from what was originally the cold storage facility of the Manhattan Refrigeration Company.  Believe it or not, before the days of refrigeration, this massive structure produced chilled air that was pumped through underground pipes to the various meatpacking facilities in the surrounding Meatpacking District as a way to preserve meat; GVSHP used this ingenious system and the evidence we uncovered of the extent of the meat cooling system throughout this neighborhood to help successfully argue for landmark designation and State and National Register of Historic Places listing for this structure and the adjacent Gansevoort Market Historic District (find out more HERE and HERE).

Finally, most of the residents of the 15.2% Republican 66013 Election District live in The Archives Apartments, the former U.S. Appraiser’s Warehouse and U.S. Federal Building, which was converted to apartments in 1987.  Because this was a formerly publicly owned property, its sale to a private developer for for-profit residential use also required that low-cost space be provided to theaters and other local non-profits (which the owner tried to eliminate in 2008, a move successfully opposed by GVSHP and many others), and a fund was established from the sale of the building to support housing and preservation projects in the neighborhood.  The building was one of New York City’s very first individually designated landmarks and was listed on the State and National Registers of Historic Places  (read more about the building HERE and HERE).

So these three residential complexes would appear to have far more in common than in contrast.  To this day, all three are also rentals, which stands apart in the increasingly condo-ified Far West Village.  Then why is the Westbeth district the least Republican around, while the West Coast and Archives districts, with which it would seem to share so much in common, the most?

Reasonable speculation could follow.  One notable difference between the districts and their respective landmarked, adaptively re-used complexes is that while the West Coast Apartments and Archives are pricey market-rate rentals with a good deal of turnover, Westbeth is for the most part home to long-time residents, many of whom have been in the complex for thirty years or more.  Westbeth is also neither pricey nor market-rate; rents are regulated and kept at low levels to ensure that the working artists who both live and work there can remain in their homes.  The artist residents elect a Council which makes important decisions about the use of collective gallery space which they run and the admission of new tenants, and the complex is run by a non-profit board.   The more conventionally-structured West Coast Apartments and Archives house a lot of younger urban professionals who may live there for a while until their careers move them on to more permanent locales. The former is clearly tinged with a somewhat socialist structure and philosophy, while the latter is a bit more laissez-faire capitalist, which more than anything may account for this difference.

Looking to draw further comparisons between political affiliation and historic preservation?  Click on the ‘City Map’ below for a map of New York City showing all designated historic districts, which you can then compare with WNYC’s map of Republican voter registration levels. 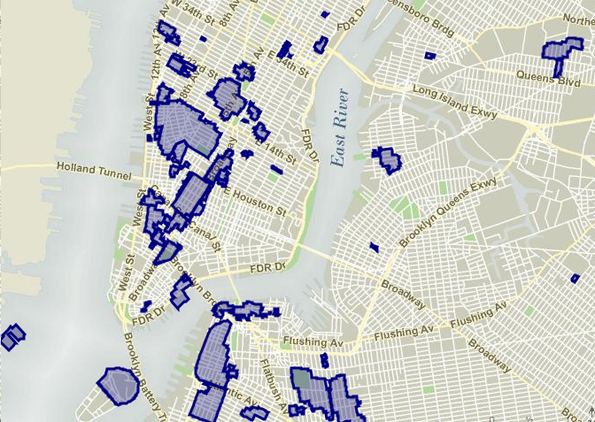 Like this kind of stuff?  Read prior blog posts about the Village and the Census HERE and where same-sex couples live HERE.

4 responses to “Few Republicans, And One Big Political Paradox, in the Village”