In honor of National Hispanic Heritage Month, which takes place each year from September 15th to October 15th, we wanted to highlight an institution in our neighborhood that has dedicated itself to the promotion of Spanish culture for nearly 150 years. 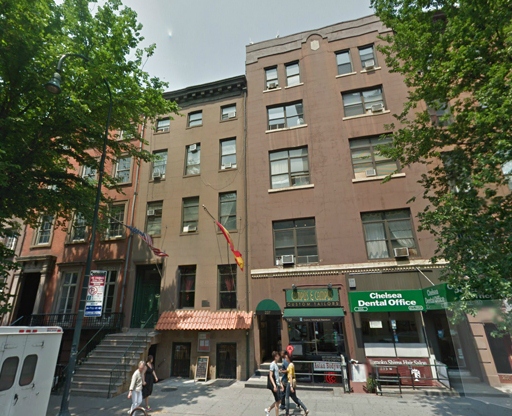 The Spanish Benevolent Society (now more commonly known as Centro Español-La Nacional) was founded as a social club in 1868 and has long operated in the transitional style row house at 239 West 14th Street. It’s one of the last vestiges of the cultural district formerly known as “Little Spain”, which was located on this stretch of 14th Street between Seventh and Eighth Avenues.

According to the Society’s website, more than 15,000 Spaniards and their American-born children and grandchildren lived in an area that once extended from Christopher Street to 23rd Street along the Hudson River. Although the majority of this Spanish population has since left the area, the Society strives to maintain an appreciation for Spanish culture.

Since the beginning, the mission of the Spanish Benevolent Society has been to “promote, encourage and spread the spirit of fraternity and solidarity among Spanish and Hispanic-American residents of this country.” This was especially important in the late 19th and early 20th centuries when Spanish immigrants arrived in New York.

The website goes on to read that the Society “has served as a meeting ground for political dissidents and revolutionaries, avant-garde poets and artists – including the groundbreaking director Luis Buñuel and the modernist poet Federico Garcia Lorca, who wrote sections of his famous anthology “Poet in New York” during his stay at the Society. It is even said that Picasso stopped in for a taste of home.”

Although the Spanish population has dwindled in this area over the last century, the center still focuses on the preservation and education of Spanish culture. Anyone is welcome to stop by and eat at their tapas bar and restaurant, La Nacional, as well as take classes in Spanish language, music and dance.

One of the great things about working at GVSHP is hearing stories from people who experienced our neighborhoods firsthand. This past summer, an elderly woman contacted us about her memories growing up on nearby Perry Street in the 1930s and walking with her family to Casa Galicia, which was located in Little Spain. We were unable to track down the exact location of Casa Galicia (which is now located in Astoria, Queens), but we did find New York Times articles that mention plays that were performed at the Society’s “Spanish Theatre” around that time (see news clipping below).

While we can’t be sure, we think the Casa Galicia she was speaking of may have been located here. If you know more about this, please share with us in the comments!

She recalls attending this social club every weekend as a child; with her family, she sat in the balcony to see shows in the afternoon and have dinners in the evening. (Although this building does not look large enough to have a balcony inside, we wonder if perhaps she and her family were seated in a smaller mezzanine.) The money collected from these events went to support Spanish Loyalists who were fighting against General Franco during the Spanish Civil War; the woman still has kerchiefs that were sold at these fundraisers.

Hearing stories from people who experienced Greenwich Village firsthand always enriches the buildings we fight so hard to protect. If you have a story you’d like to share, whether it took place in the Village, East Village, or NoHo, we would love to hear from you! Please share your stories through GVSHP’s Virtual Memory Book.