We recently highlighted the marvelous illustration work of James Gulliver Hancock as he continues in his attempt to draw all the buildings in New York. This week, we thought we’d take a look at a much earlier attempt at cataloging the city – a great set of illustrations of Broadway from Bowling Green to 59th Street from 1899 via the Mail and Express, a New York weekly. The collection is available to view online at the New York Public Library Digital Gallery.

Noting that, “Perhaps New York is more generally known through the fame of four of its streets than from all other causes combined. These streets, to name them in the order of their relative importance, are: [sic] Broadway, Wall street, Fifth avenue and the Bowery,” the Mail and Express took its readers on an illustrated journey along the ‘most important’ thoroughfare, Broadway.

Of course Broadway runs through the Village, so we get some great opportunities to see some stylized views of our streets and storefronts from over a century ago:
Today the massive Regal Union Square 14 Theater sits at Broadway and East 13th Street, but in 1899 the corner was home to another theater — the Star Theater (formerly Wallack’s Theater).

Though its neighbors to the north were present in 1899, the building that houses the Strand Bookstore today on Broadway and East 12th Street was not yet constructed. 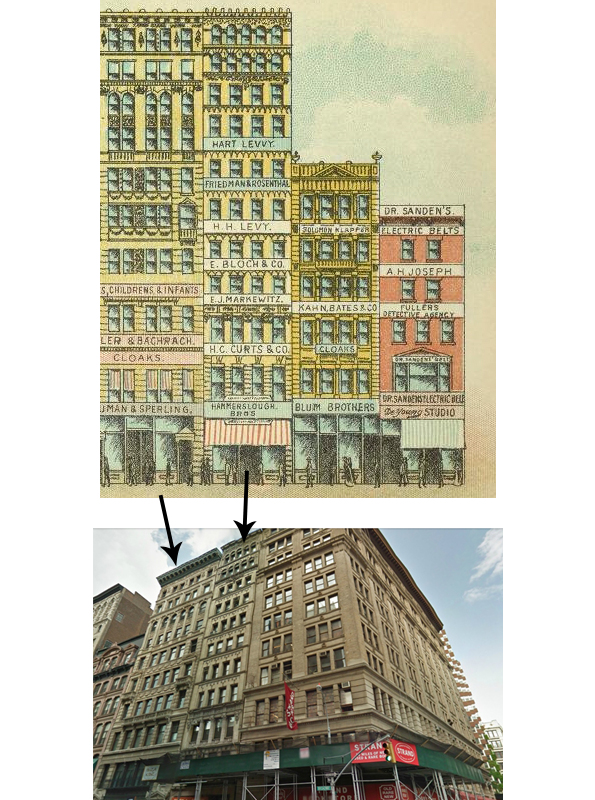 This view of Grace Church near East 10th Street has not changed, though its bread baking neighbor to the south (which Off the Grid profiled) has since disappeared.

You can view the entire set of illustrations for all of Broadway from Bowling Green to 59th Street here.

2 responses to “An Illustrated Trip Down Broadway”