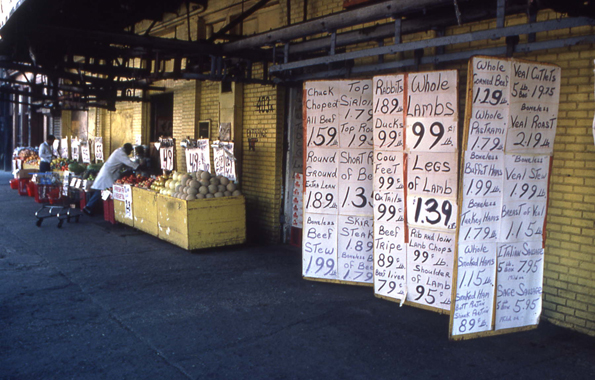 Since the first public market opened in the area in 1884, Gansevoort Market — or the Meatpacking District — underwent many changes in building form and use as the area became more commericalized over the decades. Though now associated with high-end boutiques, galleries, and restaurants, Gansevoort Market by the 1980s and 1990s was a collection of workaday meatpacking facilities and seemingly forgotten urban spaces.

Gregoire Alessandrini, a film student in New York during this period, has an amazing collection of photos of the neighborhood, taken between 1991 and 1998 that dramatically capture how different the character of the neighborhood was just twenty years ago. Click here to view them.By the early 2000s, GVSHP and other neighborhood groups responded to the dramatic changes already occurring to the architectural fabric 0f this area, which has important links to New York’s mercantile past. In 2001, GVSHP formally submitted a proposal for designation of a Gansevoort Market historic district to the New York City Landmarks Preservation Commission (LPC).

By September of 2003, the LPC voted to approve the proposed Gansevoort Market historic district. You can read Part 1 of the designation report here and Part 2 here. This was the first new district to be enacted in the Village since the first Greenwich Village Historic District in 1969 (in 2007, GVSHP successfully secured listing on the State and National Register of Historic Places for the entire Gansevoort Market Historic District). While several sites left out of the NYC historic district have faced incredible development pressure (only the City, and not the State or Federal, designation can prevent demolition of privately-owned buildings) many of the re-purposed industrial, commercial and residential buildings remain intact.