The Bowery Alliance of Neighbors (BAN), a grassroots organization, has been a passionate force within the New York City preservation community since 2007. Co-founded by David Mulkins and Anna Sawaryn, BAN advocates for the preservation of the historic buildings on the Bowery. They focus their efforts particularly on the east side, which lacks the zoning and landmark protections that much of the west side of the Bowery enjoys. BAN has had some incredible accomplishments in their efforts to preserve and honor the history of one of New York’s oldest and most well known thoroughfares. For their dedication, GVSHP is delighted to be presenting the Bowery Alliance of Neighbors with a 2013 Village Award on Monday, June 17th.

David Mulkins currently serves as the chair of BAN. As a teacher of United States history at the High School for Art and design, David has a long-standing appreciation of New York history. As the above image shows, he and BAN vice chair Jean Standish gathered with local community groups (including GVSHP’s Andrew Berman) and elected officials in front of 35 Cooper Square. This c. 1825 Federal house was demolished in 2011 to clear the site for a new development, likely a dorm, which still has not been built on the site. 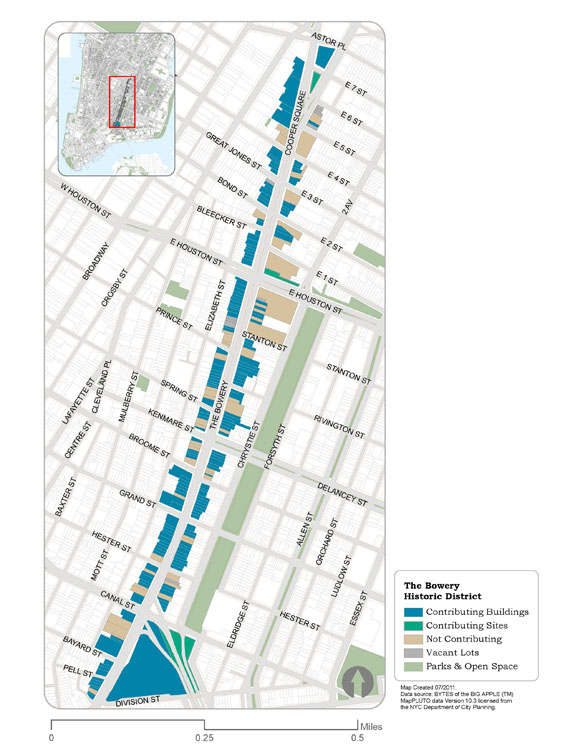 The Bowery Alliance of Neighbors’ primary goal is to secure landmark designation for a number of historic buildings along the Bowery. A big cause for celebration came earlier this year when the Bowery and the buildings along it were listed on the National Register of Historic Places (see map at left). It had previously been listed to the State Register in 2011.

This was a big first step, and as more of the historic character of the Bowery is threatened with increased development, the work of BAN is more important than ever.

In hoping to secure the same level of landmark and zoning protections seen on the west side of the Bowery, BAN has implemented its East Bowery Preservation Plan. The group received a huge boost of publicity earlier this year when famed movie director Martin Scorcese, who grew up on nearby Elizabeth Street, wrote a letter in support of this plan to the City Planning Commission.

Ultimately, BAN hopes that the Landmarks Preservation Commission will consider a historic district for the Bowery, which is the strongest form of landmark protection available.

On a limited budget, BAN continues to work tirelessly to see this historic section of the city preserved for future generations.

Please join us on Monday, June 17th at 6:30 PM at GVSHP’s 2013 Annual Meeting and Village Awards to congratulate the Bowery Alliance of Neighbors and five other award winners for their wonderful contributions to our neighborhoods. Be sure to stay tuned to Off the Grid for our upcoming posts about all the 2013 Village award winners.