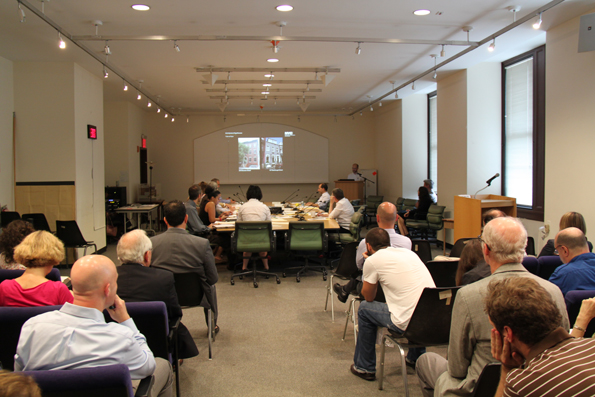 Yesterday the Landmarks Preservation Commission (LPC) held its only public hearing on “phase II” of GVSHP’s proposed South Village Historic District. There was a great turnout in support of landmarking the district and we thank everyone who came to testify, sent letters to the commission, and otherwise voiced their support. You can read GVSHP’s testimony here and view photos of the hearing here. Although an actual vote by the commission is not expected until later in the year, this was our opportunity to make the case for landmarking directly to the commissioners.

GVSHP, elected officials, preservation groups, and members of the public all sounded their strong support for landmarking now without cutting back the district boundaries and urged the LPC to move ahead with the remainder of the proposed historic district located south of Houston Street (see map at right).

We also encouraged the commission to keep a pair of architecturally notable, low-rise NYU buildings (which could be future development sites) and a row of ten 1840s houses at 130-148 West Houston Street in the district. These buildings were initially excluded from the proposed district, but GVSHP fought to keep them in.

While much progress has been made in getting this historic area landmarked, we still need to fight to get “phase III” of our proposed South Village Historic District designated. This is the incredibly vulnerable and historically rich area south of Houston Street which the LPC has only committed to “survey” before the end of the year. This area faces tremendous development pressure, especially since the recent approval of the Hudson Square Rezoning.