Our Building Broadway series provides a glimpse into the manufacturing past of Broadway’s historic loft buildings. From Houston to 14th Streets, read more posts in this series by clicking here! 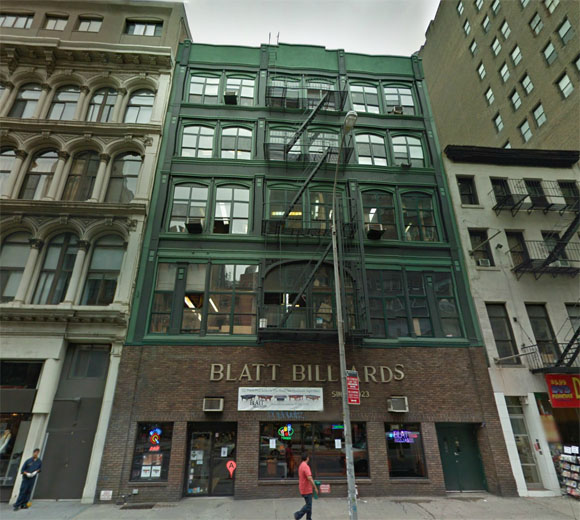 Located between 11th and 12th Streets, 809 Broadway has been in the news recently with the announcement that Blatt Billards is leaving this location for New Jersey. According to E.V. Grieve, the company, opened in 1923, had been a longtime tenant of the building before purchasing it in 1972. It’s not exactly clear who will be taking over the location, but Blatt had both its manufacturing and showroom spaces in the building.

With this news, we thought we’d focus today’s Building Broadway post on no. 809, which was built in 1887 for manufacturing purposes. It replaced a four-story brick townhouse that later became a store.

The beautiful illustration at left shows us the building in 1899. As today, it is located next to the McCreery Building. Although the writing on the spandrels between floors has faded, we can just make out:

We can’t exactly be sure of two sections (“I. Collands” and “SUSP” don’t seem quite right), so if you have a guess we’d love to hear from you!

Keep Manufacturing Company, though appearing to have one of the smaller signs on the building in this illustration, is listed on the 1899 Bromley map. With a little research we found that Keep was a manufacturer of men’s clothing (surprise, surprise in this neighborhood!). They made everything from pajamas, scarfs, and underwear in various materials to cotton, flannel, and linen shirts. The first listing we found for this company at this address was in 1894, but by 1918 they had moved to 17 West 42nd Street.

As you can see, the cast-iron building also sported a large American flag on its roof. The triangular parapet on top has since been removed. The original large windows (since replaced) are quite captivating and the grand archway at the second floor gives the structure a monumental feel from the street. Of course, what Victorian-era building would be complete without large canvas awnings?

This advertisement appearing in The Howitzer Advertiser shows that 809 Broadway was the only store location for the Keep Manufacturing Company. We particularly like, “We manufacture all the shirts we sell, and this fact certainly should appeal to you.” If you happen to have come across an antique “Keep’s Shirt” it could very well have been made right here.

And, finally, while Blatt’s move likely means the end of manufacturing at 809 Broadway, we invite you to learn more about this area’s industrial past by looking through the NoHo Historic District Designation Report located on our Resources page.

One response to “Building (809) Broadway: Keep on Manufacturing”