The world mourned the passing of Lou Reed this past weekend at the age of 71. Front man of The Velvet Underground, Reed was born in Brooklyn and raised on Long Island, and came to epitomize the raw New York City experience of the 1960s and 1970s. As with many of the great artists of the 20th century, Reed’s life and career intersected with the Village.

It was 1966 when Reed’s band, The Velvet Underground, was discovered by Andy Warhol playing at the Café Bizarre at 106 West 3rd Street in the South Village (now replaced by an NYU law school dormitory). Taken by their unique sound, Warhol invited the group into his world and eventually became its manager. Reed and the Velvet Underground would participate in Warhol’s traveling multimedia show, The Exploding Plastic Inevitable, held at times on St. Mark’s Place in the same space that the Electric Circus would soon occupy by the late 1960s. 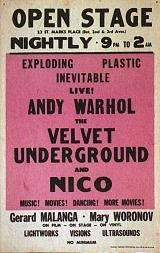 Though never a mainstream pop success, Reed and the Velvet Underground had a profound impact on a remarkable number of performers, such as Patti Smith, U2, Talking Heads, the Sex Pistols, R.E.M., and Roxy Music (among many others), who cite the band’s work as an influence. In fact, Brian Eno made the oft-repeated assertion that while the first Velvet Underground album may have sold only 30,000 copies in its early years, “everyone who bought one of those 30,000 copies started a band.”

Reed, who lived for a time in the Village, was also quintessentially a New York force, as the Chicago Sun-Times notes, Reed was “known for his cold stare and gaunt features, he was a cynic and a seeker who seemed to embody downtown Manhattan culture of the 1960s and ’70s and was as essential a New York artist as Martin Scorsese or Woody Allen. Reed’s New York was a jaded city of drag queens, drug addicts and violence, but it was also as wondrous as any Allen comedy, with so many of Reed’s songs explorations of right and wrong and quests for transcendence.” Classics such as “Walk on the Wild Side” and “Halloween Parade” exemplify this combination of world-weariness and wonder that Reed reflected back in his songs.

Before his passing, Reed was kind enough to participate in an upcoming GVSHP book project to be released in spring 2014, offering (along with numerous other Village notables) his personal reminiscence of the Village.