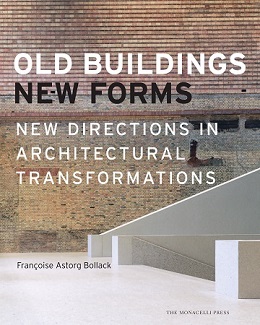 It was a wonderful presentation, with images from her book of places all over the world where old buildings were saved instead of demolished, and given new life through creative processes of thinking and building for adaptive re-use.

It made me think how lucky we are that there are some prime examples of this right here in the Village. Unlike most people who live in other cities, here you can take yourself on a one-hour walking tour and feast your eyes on the benefits of historic preservation.

The Jefferson Market Library, on Sixth Avenue and West 10th Street, with its noteworthy clock and bell tower, is a great example of a beautiful and historic building that escaped demolition and was re-purposed for a second and totally different existence. Originally a courthouse (in fact, New York’s first night court) designed by architects Frederick Clark Withers and Calvert Vaux in a Victorian Gothic style, the structure was built in the 1870’s and served as a courthouse until 1945.

By 1959, the city planned to demolish it and erect an apartment building. But Greenwich Village residents and activists including Margot Gayle and Philip Wittenberg led the effort to save the building from the wrecking ball. In 1961, Mayor Robert F. Wagner announced that it would be preserved and converted into a public library. Construction began in 1965 and the library opened in 1967. You can read more about the library HERE.

Moving west, the Federal Archives building at Christopher Street and Greenwich Street immediately presents itself as a sturdy, well-built structure. Surrounded by smaller buildings, this full-block structure was originally used by the U.S. government as a repository for documents. The building was eventually abandoned but saved from demolition, and converted to residences in the late 1980’s. You can see more photos and read the whole story HERE.

One of the most well-known (and favorite!) buildings on the Greenwich Village Hudson River waterfront is Westbeth, located on West Street between Bethune Street and Bank Street. What were once the laboratories for Bell Telephone, this complex of buildings was saved and converted to affordable housing for artists. Sadly, many of the resident artists lost some of their works that were stored in the basement when Hurricane Sandy struck in October 2012.

And by now, who doesn’t know the story of the High Line Park, one of New York City’s most popular tourist destinations? The former elevated railway converted to a beautifully landscaped public park winds its way from Gansevoort Street in the Far West Village up to 30th Street. This is a stunning example of creative adaptive re-use of a structure other than a building The High Line Park has had a profound effect on the surrounding neighborhood, and has inspired similar transformations in other cities. You can read more about the High Line Park HERE.