Oh, if only Mayor Rudy Giuliani’s administration hadn’t auctioned off P.S. 64 to a private buyer back in the sultry days of July, 1998, a whole decade and a half ago. The community center called CHARAS/El Bohio that improved and inhabited the historic 1906 schoolhouse would not have gone homeless for 12 years (after finally being evicted after several court fights in 2001). Local residents would not scramble as much to find space for classes, events and communal gatherings. Two residential blocks — East 9th Street and East 10th Street, between Avenues B and C — would not be blighted by a large, empty, decaying building: a construction site with little construction, because the developer has not moved forward in a substantive way.

During the past twelve years since Mayor Giuliani’s exit there has been mostly frustration and deadlock in connection with the site. But those who remember CHARAS as a vibrant, essential place have never given up their dream of getting it back, and the inauguration of Mayor Bill de Blasio in less than two weeks provides new hope for intervention. With activists’ urging, Community Board 3 passed a resolution Dec. 17 (for full text, see #2 here, p. 5) requesting that the new administration return the building to the community.

The most unbiased observer would have a hard time saying that owner Gregg Singer, who bought the property for $3.15 million in 1998, has been a responsible owner or has realized the highest and best use of the property. After numerous false starts, demolitions and DOB violations, Singer this fall posted a website touting a dorm called University House, to open for the 2015/16 school year, although according to the Department of Buildings website he has filed none of the documents necessary to do so.

After the CB3 vote on Tuesday at its monthly meeting, CHARAS co-founder Chino Garcia was smiling. (The name CHARAS comes from initials of his name along with those of his co-founders.) He still gives out business cards reading CHARAS, Inc. — “Culture, Education & Hope.”

“It’s good. It gives us a fighting chance,” Garcia said. Fellow P.S. 64 activist Susan Howard, who has worked closely with Garcia over the years, agreed.

“We’ll be able to organize the community in support of this resolution and take it to the next administration and our new elected officials. It’s exciting,” she said.

The resolution’s “whereas”es tell the story. Here are key parts (and don’t miss the “therefore” at the end):

Whereas, in 2004, the owner filed plans to demolish the building to construct a 20-story dormitory, “University House,” though the owner had no accredited educational institution participation; and

Whereas, after a concerted community effort, the NYC Department of Buildings denied the demolition permit, based on Rule 51-01 that governs the Classification of Student Dormitories, requiring submission of a full lease by an accredited educational institution for a minimum of 10 years, and a restrictive declaration that the building would only be used as a dormitory; and

Whereas, in an unprecedented community campaign, in 2006, the NYC Landmarks Preservation Commission designated the Former P.S. 64 school building as a landmark, recognizing both its physical, cultural and historical distinction; and

Whereas, after the landmark designation, the owner removed the building’s cornices and dormers, as well as removed the architectural detail at the roof line, leaving the building open to the elements; and

Whereas, the owner has allowed the building to fall into extreme disrepair; and

Whereas, the DOB has issued over 42 violations since 2008, including the failure to maintain the premises; and

Whereas, the owner currently owes the City of New York approximately $30,000 in unpaid penalties for ECB violations; and

Whereas, in 2012, again the owner filed to convert the building to a dormitory; and 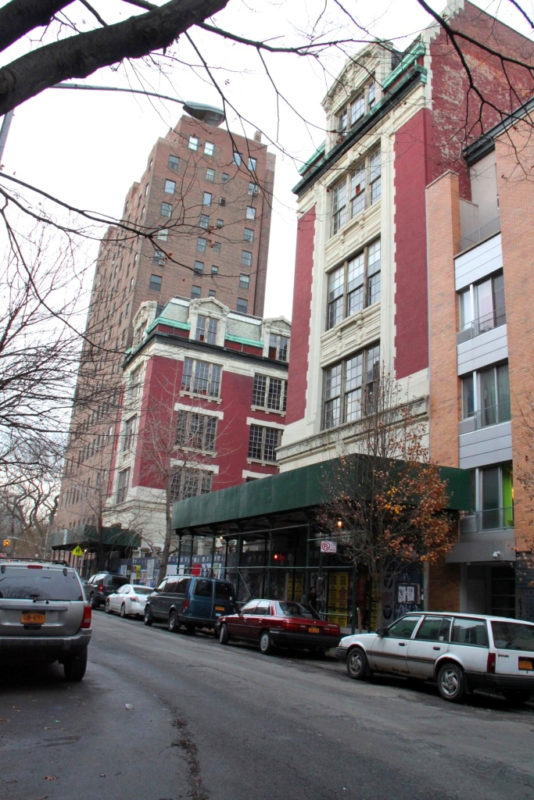 Whereas, the owner’s current application for dormitory use does not meet the NYC Department of Buildings’ criteria for a dormitory under Rule 51-01, as there is no lease for the entirety of the facility with one or more accredited educational institution for a minimum of 10 years, nor is there a restrictive declaration that the building will be used exclusively as a dormitory; and

Whereas, it has been 14 years since the auction sale and the owner has been unable to comply with the conditions of sale to develop a community facility; and

Whereas, since the sale and privatization of 605 East 9th Street, the community has faced displacement of vital community services, community organizations and community space; and

Whereas, the building has not been properly maintained by the current owner and has become a threat to public safety due to, among other things, a lack of proper snow and ice removal and a failure to consistently maintain construction scaffolding; so

Therefore, be it known that Community Board 3 requests that the new mayoral administration return the former P.S. 64 school building to the community by legally retrieving and then selling or giving it to a well-established not-for-profit organization(s) with a long history of serving the people of the Lower East Side/East Village including, but not limited to restoring the not-for-profit organization known as CHARAS / El Bohio to the building located at 605 East 9th Street.

One response to “What’s Up With that Rotting School on East 9th Street?”