Tompkins Square Library opened at 331 E. 10th Street, on the northern edge of Tompkins Square Park, on December 1, 1904. Like many of the New York Carnegie libraries,  it is a handsome McKim, Mead and White building (designated as an individual landmark in 1999) that looks almost exactly today as it did then.  It is still well and widely used, with everything from a community art gallery in the basement, to adults’ collections on the ground floor, to a children’s room upstairs, with a classroom for English language learners in the top-floor aerie.

The one thing it doesn’t have today is lines to get in!

These images from the New York Public Library Digital Gallery attest to the eager greeting the library’s arrival received from the community. (We think, that is; these photos do not have dates. But everything from the style of dress to the lengthy queue suggest that’s what’s going on.)

Another day — judging by the change in dress for the weather — there were lines up and down the sturdy, broad staircases, where you can see the same decorative metalwork that still exists today:

Today the building stands in an impressive row of buildings, designated the East 10th Street Historic District in 2010, following the advocacy of GVSHP and its allies. Just as in the library’s early days, the building is still a dependable place for children to find stories, for adults — now more likely Latino or Chinese than Hungarian or Polish — to learn English, and for anyone to feel ownership of a proud building that will hopefully still be serving New Yorkers another century hence. 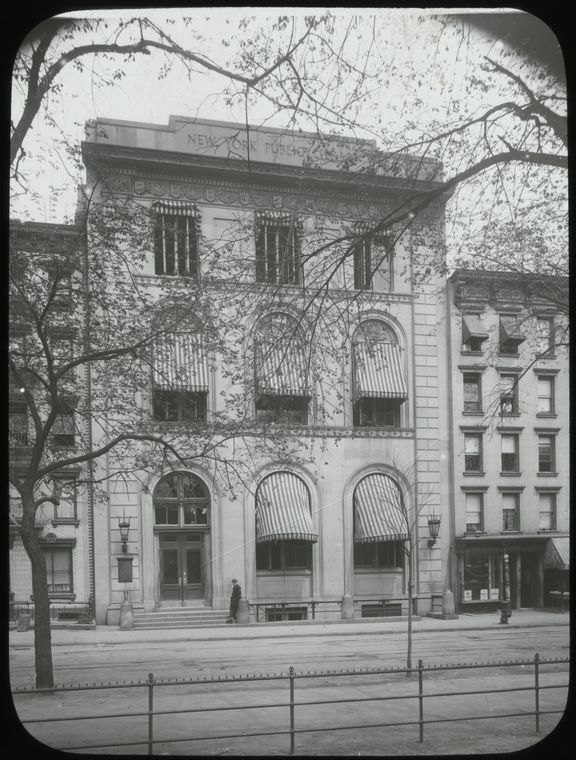 The awnings were a festive touch … and provided welcome shade on sunny days, pre-air conditioning.

3 responses to “The Hottest Spot on Tompkins Square in 1904”