We always love talking about the Merchant’s House here on
Off the Grid (here’s some proof); how could you not be amazed by a house that was occupied by one family – the Tredwells – from 1835 (three years after it was built in 1832) to 1933? Original interior plasterwork, furniture, and the like give us the closest thing we have to time travel when it comes to experiencing the early 19th century home life of New York’s elite families.

Today, we thought we’d do a little time traveling of our own to May 25, 1936 when the old house was a young museum. Thanks to Pi Gardiner, executive director of the Merchant’s House Museum, we know that it officially opened to the public just two weeks prior on May 11th. 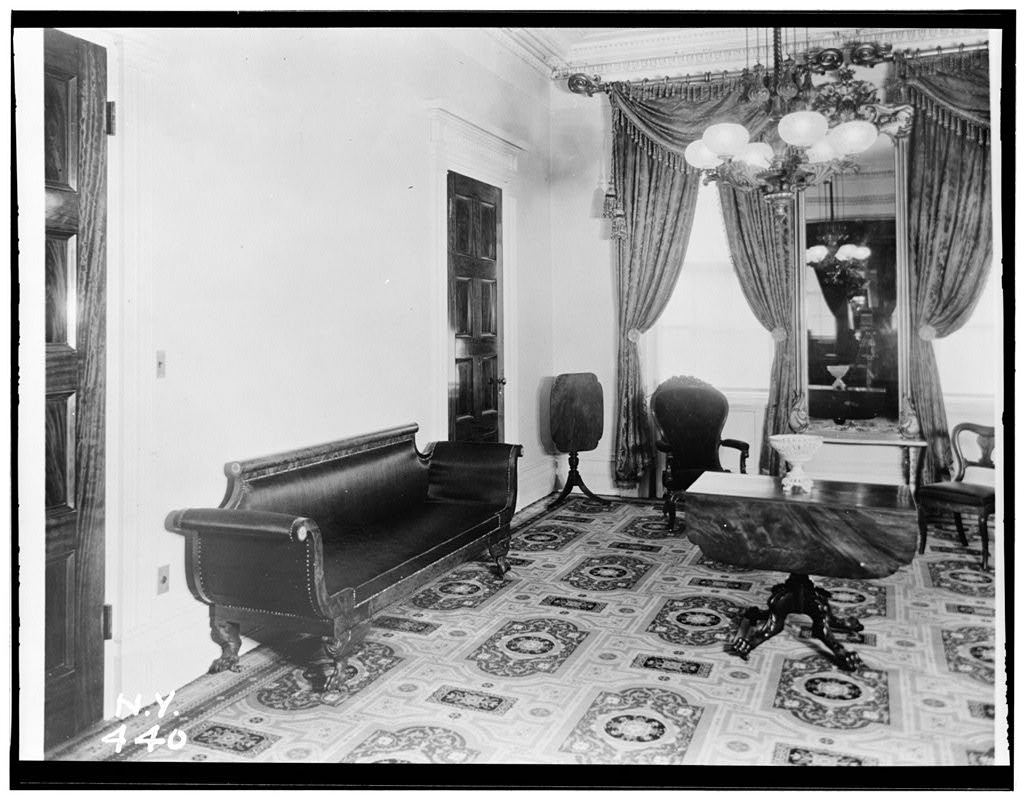 All of these photos were taken as part of the Historic American Building Survey (HABS), created in 1933 as the first federal preservation program in the United States. (This was the same year Gertrude, the last Tredwell to live in the house, died in her upstairs bedroom.) It’s operated through the National Park Service and continues to this day as a way of documenting our architectural heritage through photographs and drawings. I happened to participate in this program in college!

This post features just some of the photographs (and one drawing) of the Merchant’s House available at the Library of Congress. Above is the front parlor looking towards the front windows. It features wall-to-wall carpeting typical of the 1830s. 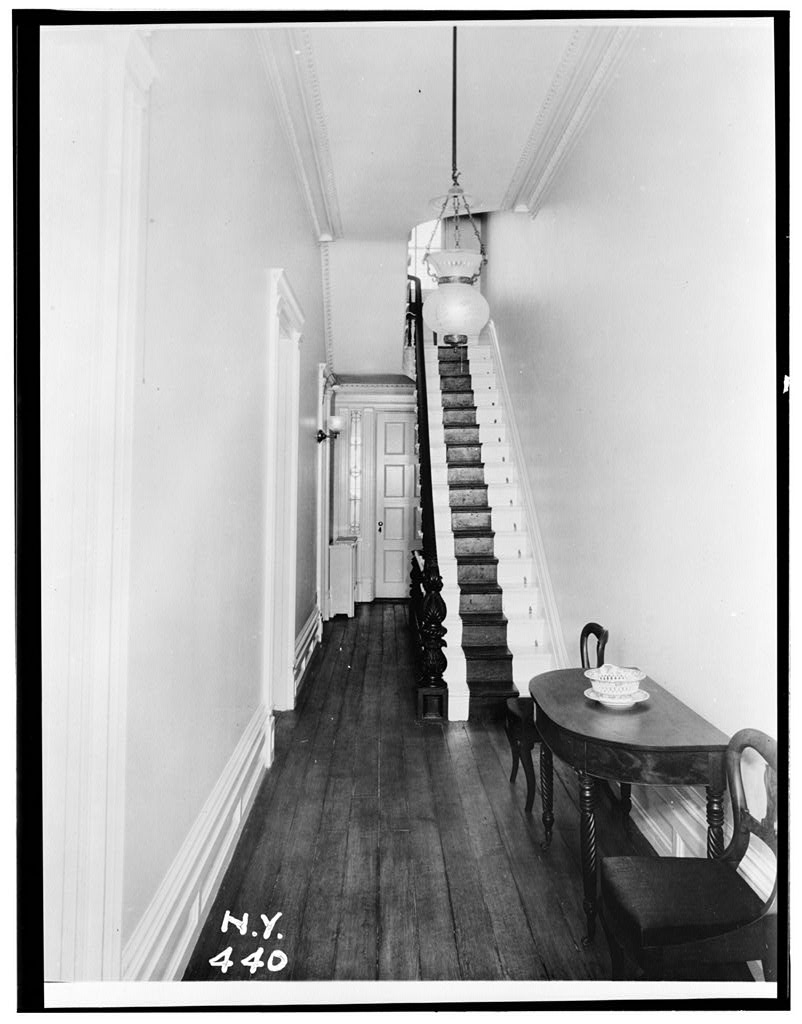 This is the first floor hall showing the narrow staircase (and even narrower runner) leading up to the family’s and servants’ bedrooms. Let’s take a walk upstairs: 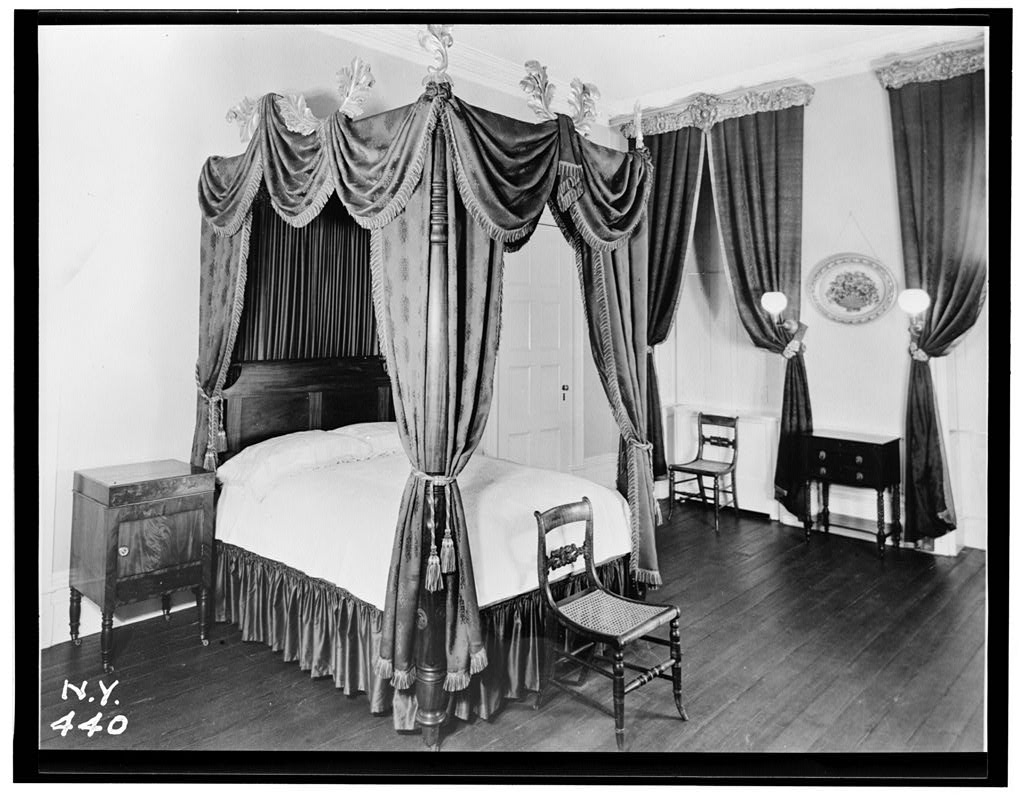 Here we have the front bedroom on the second floor, also known as Seabury Tredwell’s bedroom (the family patriarch). Did you know that, in addition to the exterior, most of the interior of the house is also a designated landmark? 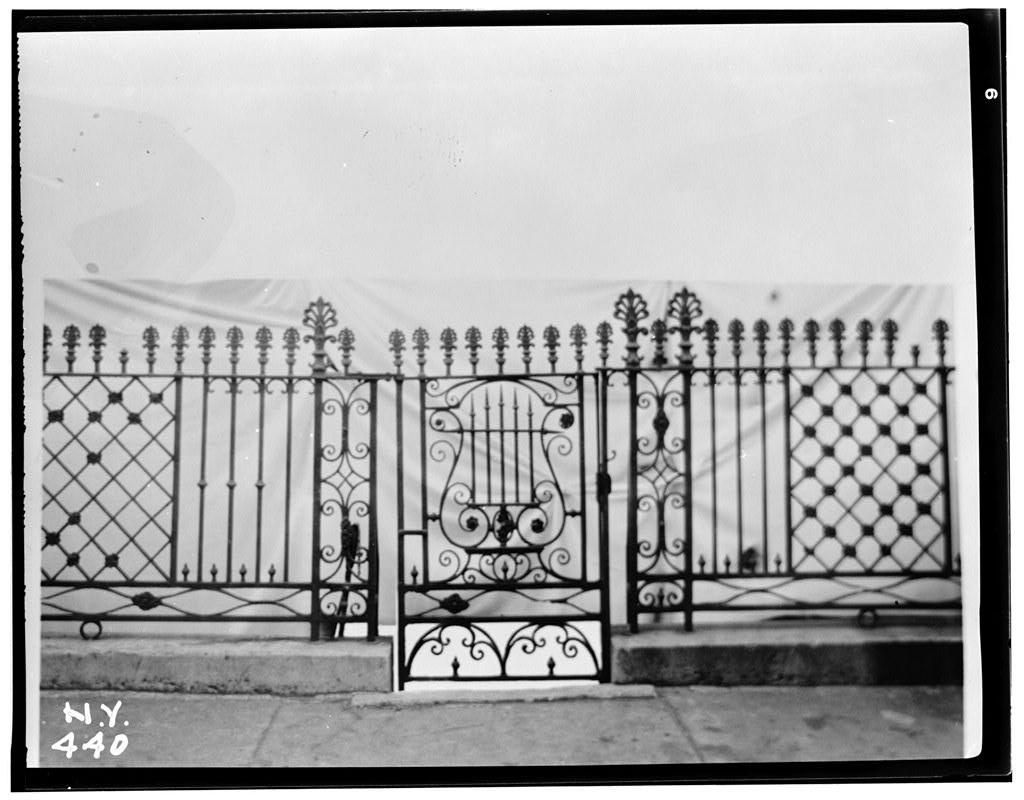 It looks like the photographer covered the building to give us a clear shot of the areaway railing. If you’re unfamiliar with the term “areaway” it’s typically the small area just in front of the house and to the side of the stoop that provides stairs to the basement door.

The railings here sport little anthemions, which coincidentally is also the name of our newsletter, The Anthemion. 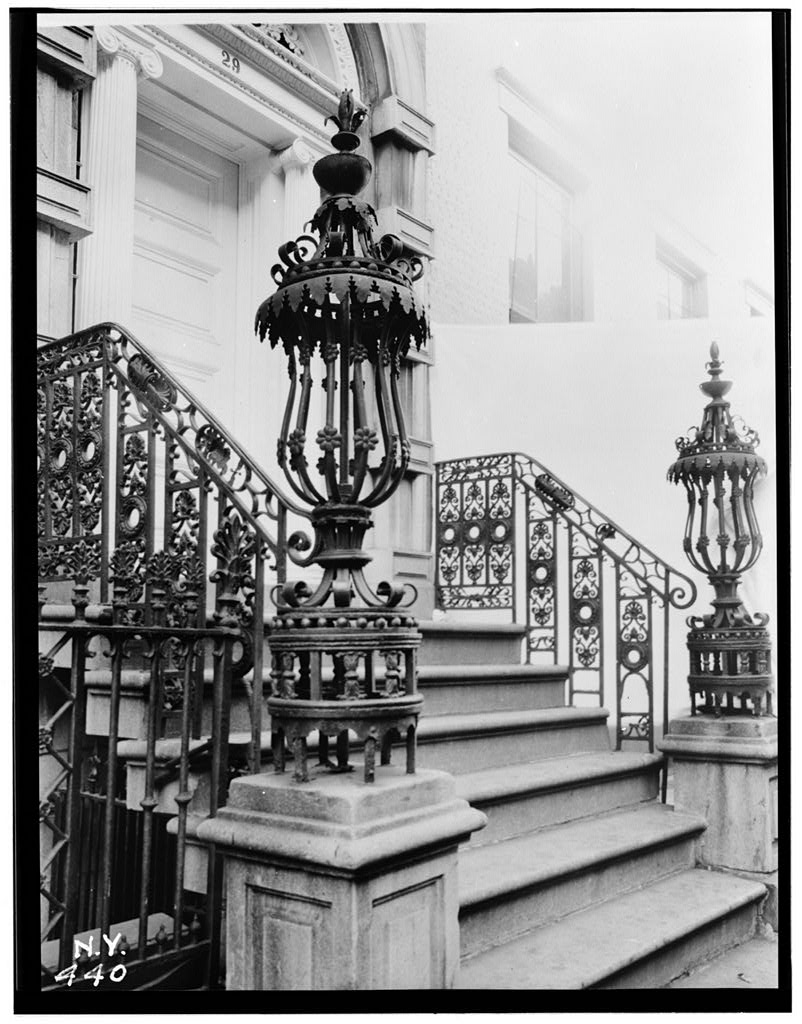 These wrought-iron newel posts on stone pedestals are breathtaking (not to mention the artistry of those railings). You’ll find stoops like this on several Federal rowhouses, though it has become harder and harder to find them over the years. 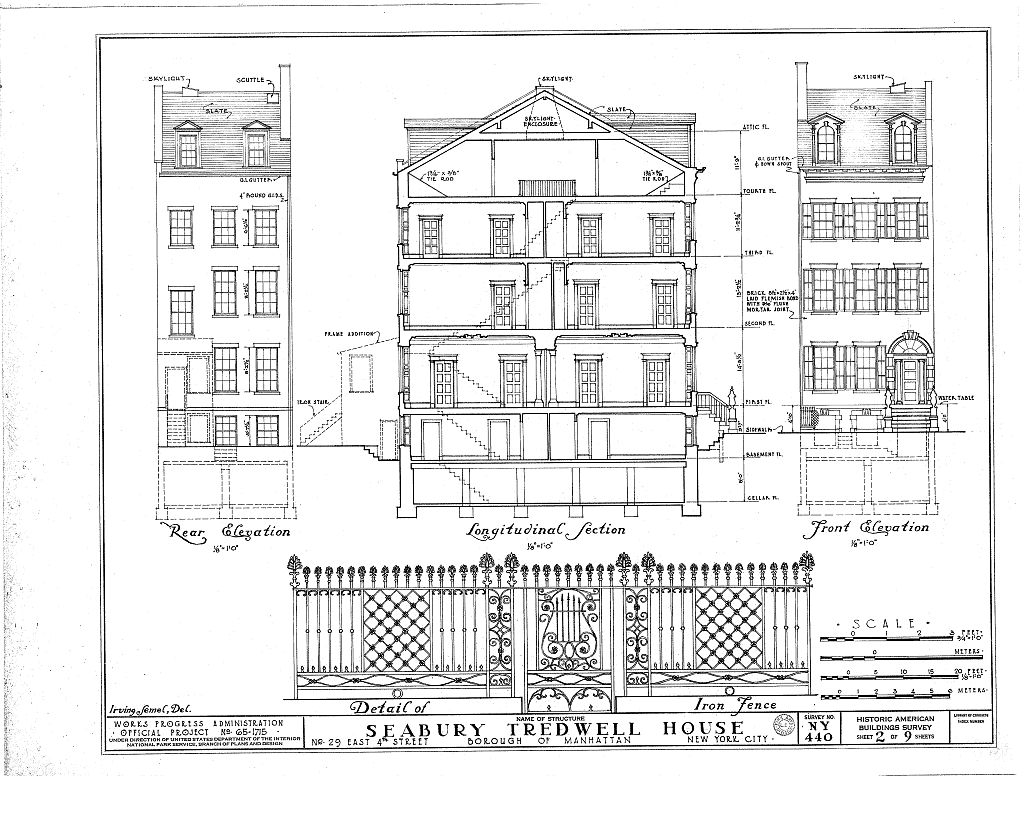 One of nine sheets of meticulously hand-drafted elevations, sections, and details. You could also think of this as a great guide for building your very own Merchant’s House dollhouse! 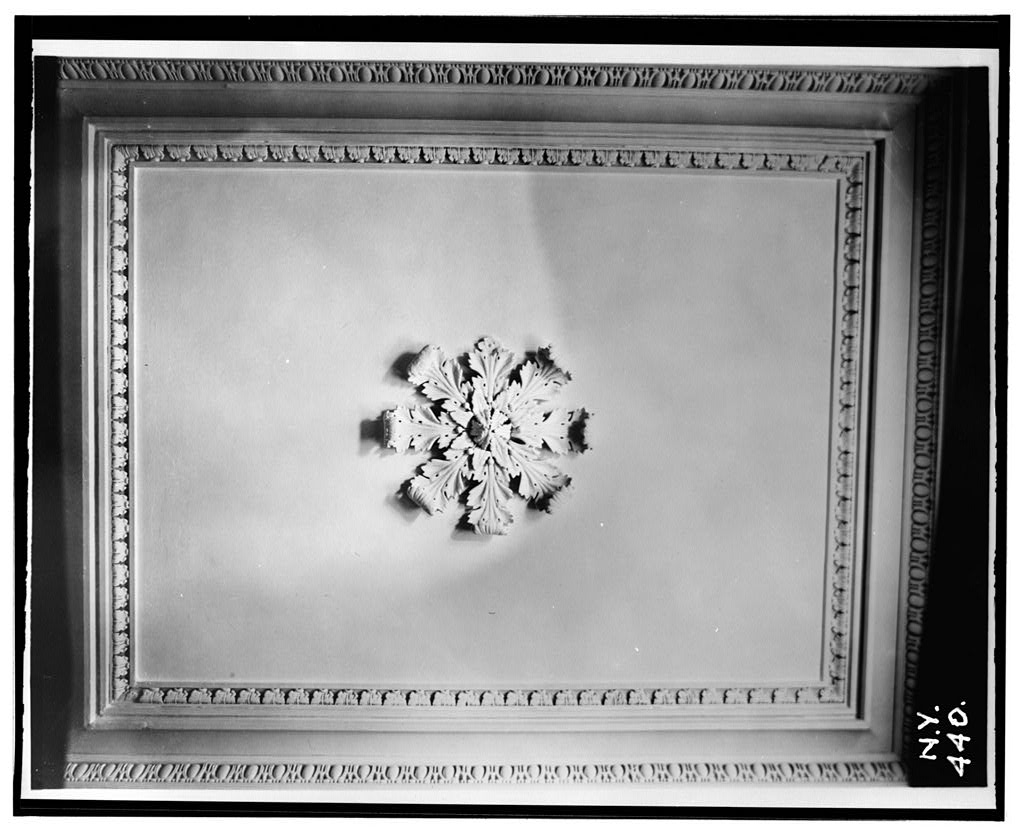 Ornamental ceiling plaster in the vestibule. I’m not sure how much this cost to make in its day, but its value is priceless today. Whatever new building may be approved next door, it’s critical that everything be done to ensure the safety of this delicate and fragile plasterwork as well as the building as a whole.

Haven’t visited the Merchant’s House Museum? Check out their great upcoming programs and be sure to stop by soon!