This is the latest installment of the Off the Grid series in which we highlight the people, places and events featured in our new book Greenwich Village Stories, available for purchase now. Visit our Facebook page for the latest on book contributors, release events and readings, and contest information.

Karen Cooper has been the director of Film Forum, a renowned cinema for independent film and repertory programming, for over forty years. She also contributed to Greenwich Village Stories, where she recounted moving to West 4th Street, what she still thinks of as an “idyllic never never land.”

How did you become involved with Greenwich Village Stories/GVSHP?
I have lived in the Far West Village since 1991 and on the borders of the East Village for 20 years prior – so GVSHP seems to have always been in my consciousness. I believe Judith Stonehill asked me to contribute to the GV Stories volume.

What first brought you to the Village? What kept you here?
I grew up in (dreaded) Queens and spent a major chunk of my adolescence on the E and F trains en route to the Village.  I can’t imagine living anywhere else in NYC (there’s Paris of course).

What is the most rewarding part of directing Film Forum?
Finding films no one has seen before that are, in some sense, groundbreaking. Or moving. Or politically important… and then being in a position to see that they reach the public.

What is your favorite memory of your time spent at Film Forum? What challenges have you faced?
I am a very forward-looking person and I find most memories a bit sad. Ok, when I opened an earlier iteration of Film Forum on Watts Street (a street no one had ever heard of, apparently), my husband George Griffin and I sat a block or so away at the Watts Happen Inn (which no longer exists). We watched as people turned onto Watts Street to go to the first film I opened in September 1981, a documentary called 14 AMERICANS. Complete strangers found Watts Street, Film Forum, and the movie. It was thrilling. 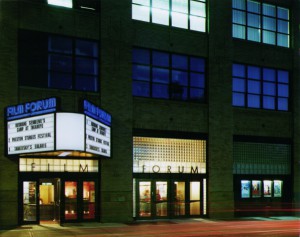 What makes the Village unique, in NYC and beyond?
Much of the neighborhood still looks the way it did 20, 30, 40 years ago.  I like the feeling of history that one gets walking down the streets of the Village. I love the federal buildings, the cobblestone streets, the remnants of the bluestone sidewalks, the small businesses that sell Italian specialties, ice cream cones and coffee.

Do you think it is important to care about neighborhood preservation? Why?
Not just important, crucial. Without preservation, the Village would start to look like every other part of New York. It would lose its character, its flavor, its charm.

What is your favorite spot in the Village?
My home on the last piece West 4th Street, as it segues into West 13th Street, is my refuge.

What has changed in the Village since you moved here? What has stayed the same?
Changed:  Bleecker Street between 7th and 8th Avenues has lost so many of its independently run stores.

What do you hope to see happen to the Village in the next 10 years?
Nothing. I want it to stay just the way it is.