Much of the Village Voice from the 1950s to the mid-2000s is available to view online via a Google digitization project. The huge trove of scanned newspapers helps reveal the changes that have occurred over fifty years to the architecture of the neighborhood, to music and culture, to local businesses, to politics, to the concerns of the average person on the street, and so much more. Today we thought we would look back fifty-five years to September 2, 1959, and see what was in the news and on people’s minds.

Leading the paper was the story of a photographer who was facing threats and possible eviction for posting a political sign in her storefront studio window. The sign supported the opposition to local Tammany boss Carmine DeSapio and read: “Clean up the Democratic Party. Greenwich Village residents have the opportunity to defeat the leader of Tammany Hall on Primary Day, September 15. Vote for Charles McGuinness and Gwen Worth as your district leaders. Voting hours 3 to 10 P.M.” 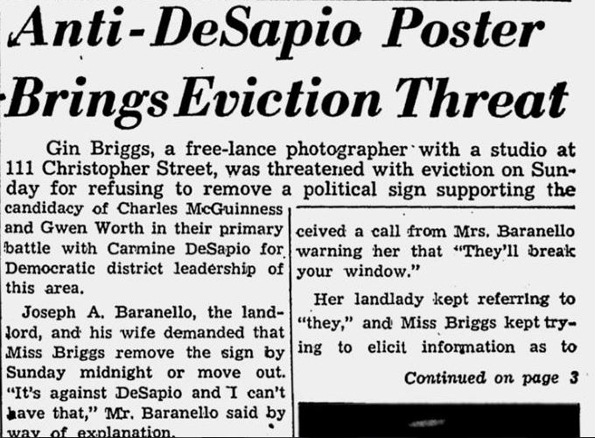 According to the article, the photographer had stones thrown at her window, “unfriendly loitering in front of her studio,” as well as a threat of eviction from her landlords if she did not remove the sign. The Tammany Hall political and patronage machine was still a force to be reckoned with in the 1950s, though episodes such as this help highlight the spirit of reform that would take hold by the 1960s.

Village Independent Democrats candidates Jim Lanigan and Carol Greitzer would go on to knock DeSapio and Tammany out of the district leader positions in 1961, and future New York City mayor Ed Koch would keep DeSapio from making a comeback in the district leader position in elections during the mid-1960s. Spurred by the photographer story, the Voice ran the following cartoon below, highlighting DeSapio’s role in supporting and trying to re-brand the corrupt Tammany ‘Tiger.’ 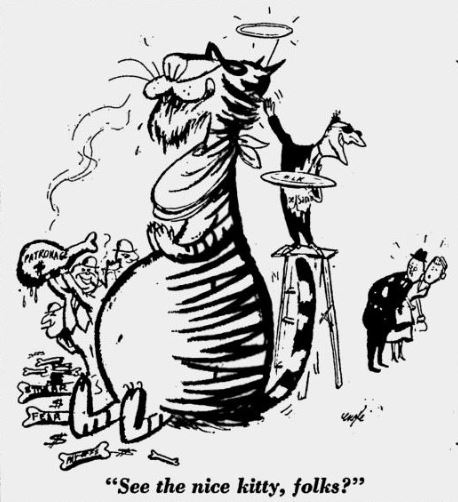 A look to New York’s past wouldn’t be complete without a check on real estate. As usual, the rents in the Voice’s September 2nd classifieds section (unadjusted for inflation) provide some comic relief when compared with those of today. 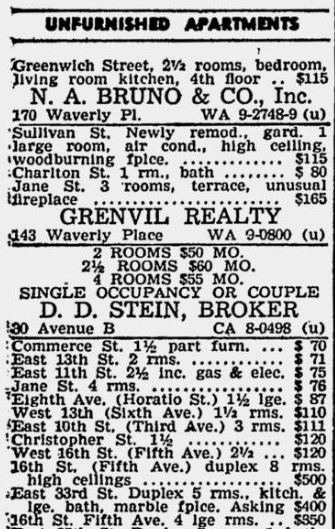 In other news, plans to eventually shutter the hulking Women’s House of Detention at Sixth Avenue and West 9th Street had spurred local groups to come up with alternatives for the space. The one below from the Village Independent Democrats would have replaced the prison and Jefferson Market Court House with an arts center with theaters and galleries. 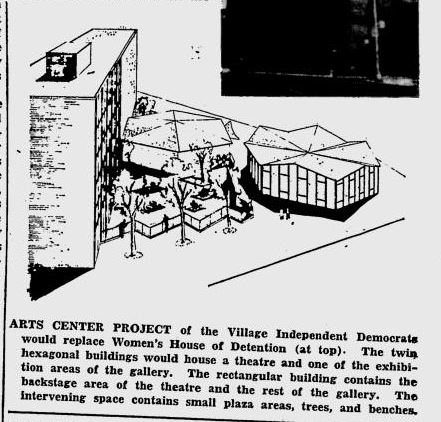 As some things change, some things stay quite the same, as evidenced by this headline fretting about the influx of large new apartment buildings in the neighborhood. Attempting to protect the unique historic character and scale of the Village – whether through landmarking, zoning changes, or political pressure – still remains a challenge today.

And for all you swingers out there, the Voice has got you covered: 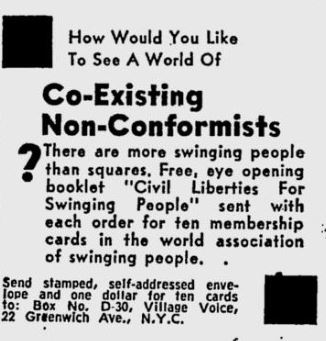