The produce spilling out into the street and the haphazard awnings in the above 1925 photo of Bleecker and Christopher Streets is quite different from the Bleecker Street scene of today. Though the commercial tenants on the street have certainly changed, the corner building, with its interesting window design, has a long history. 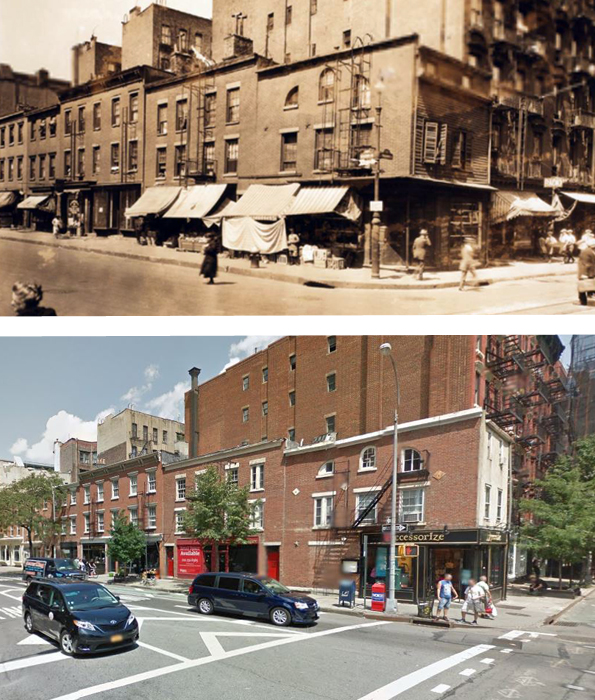 According to the Landmarks Preservation Commission’s Greenwich Village Historic District designation report, this corner building at 329 Bleecker Street was built between 1802 and 1810 for William Patterson, a grocer. Like many business-owners of the time, he lived above his store which occupied the ground floor.

Bleecker Street was widened in 1828, and as a result, the building had its west wall removed and rebuilt around the same time, which gave us the unique arched and quadrant window configuration seen today. The brickwork on the new west wall is in a Flemish bond pattern. Also demolished in the 1828 widening was 329’s neighboring building, in which the 1811 Commissioners’ grid plan for Manhattan was formulated.

The buildings to the north through No. 337 were built on lots also owned by Patterson. 331-333 was originally built as an extension of the corner house, but by the 1850s were two wood-frame buildings, and today is a one brick-faced building with commercial space on the ground floor.

To the north is 335-337 Bleecker Street, which was built in 1861 for William Patterson’s son, who was a liquor merchant.