Much of the Village Voice from the 1950s to the mid-2000s is available to view online via a Google digitization project. The huge trove of scanned newspapers helps reveal the changes that have occurred over fifty years to the architecture of the neighborhood, to music and culture, to local businesses, to politics, to the concerns of the average person on the street, and so much more. Today we thought we would look back forty-nine years to the issue from December 16, 1965, and see what was in the news and on people’s minds.

Two issues close to our heart happened to be big news in that week’s issue – a public hearing for the then-proposed Greenwich Village Historic District, and the continuing community fight to keep NYU from expanding and overwhelming the neighborhood.

The front page article highlights the first public hearing for the proposed Greenwich Village Historic District. Mayor-elect John Lindsay was on the side of preservation, as well as notables Carol Grietzer and Ed Koch. In echoes of today, the Voice reported that real estate interests balked at the idea, and created their own astroturfing group (before the term existed), the “Realistic Landmarks Committee” to oppose the historic designation. One plumbing business owner did speak at the hearing, and the Voice reported that he warned against “proceeding toward the socialist police state” if the historic district designation went ahead. 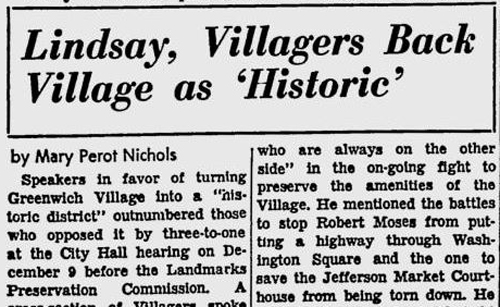 However, “speakers in favor of turning Greenwich Village into a “historic district” outnumbered those who opposed it by three-to-one at the City Hall hearing on December 9 before the Landmarks Preservation Commission.” And in typical fashion (to anyone who’s attended a contentious city hearing) “a cross-section of Villagers spoke for almost seven hours in the debate over the controversial issue.”

It would take several more years before the Greenwich Village Historic District would be designated (in 1969) as the final boundaries and building research were completed. 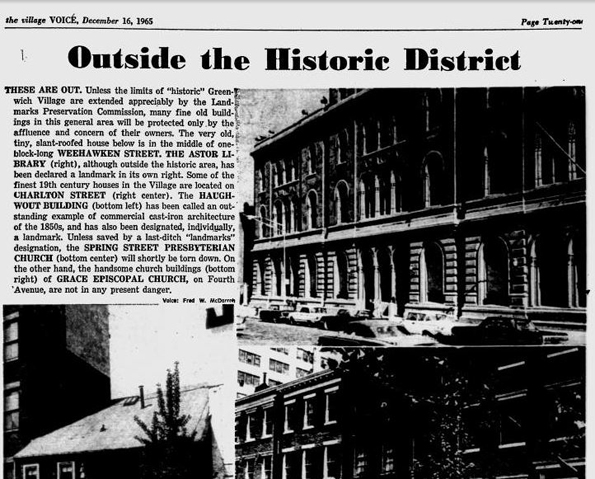 The Voice also noted several areas that were out of the protected historic district – many of which have since been protected.

In other news in that issue, NYU was threatening the construction of a thirty-story tower if it did not get its way with its proposed design for Bobst Library on the south side of Washington Square Park, which included a de-mapping /narrowing of West Broadway (LaGuardia Place) to accommodate the new building. “If Village residents object to the presently designed structure, [NYU President James] Hester suggested that they would be appalled by the 30-story tower that NYU sees as its only alternative. An alarming series of visual diagrams marshalled by Hester and Johnson show this behemoth “wedding cake” casting a shadow like an eclipse of the sun.” 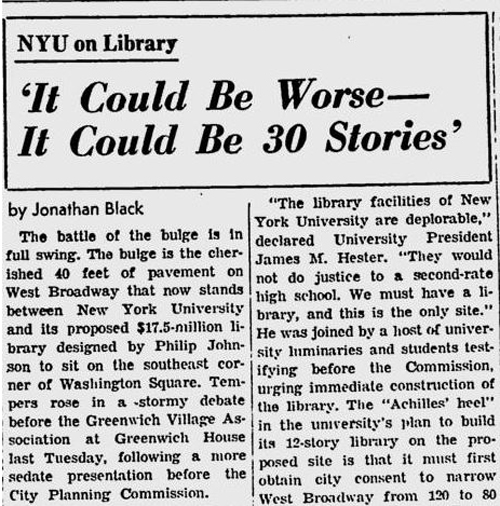 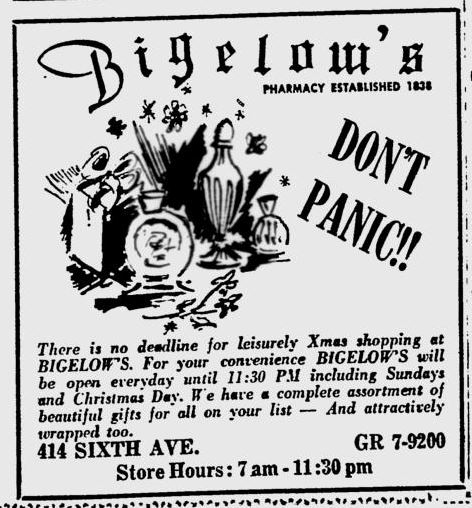 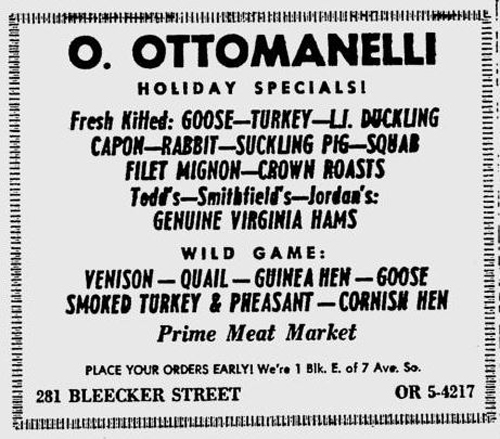 One response to “In the News: 49 Years Ago Today”