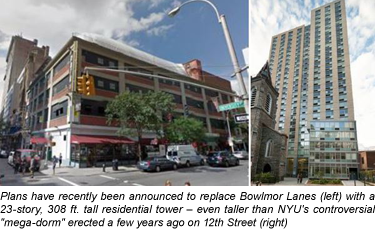 Community Board #2 will be holding a public hearing next Wednesday, January 14th at 6:30 pm at Grace Church High School, 46 Cooper Square (Bowery/East 6th Street), 3rd floor regarding GVSHP’s proposed contextual rezoning plan for the University Place and Broadway corridors. Anyone who is interested in the future or preservation of this area is strongly encouraged to attend.

In December, GVSHP held a standing room-only community meeting on the threat of overdevelopment and the need for better preservation and planning measures for the University Place and Broadway corridors between 8th and 14th Streets. Recently announced plans for a 308 ft. tall tower on the former site of Bowlmor Lanes at University Place and 12th Street highlight the serious flaws in the zoning which governs new development in this area. Current zoning has no height limits, can allow towers of 300 feet in height or even greater, and in most cases allows and even encourages dormitory or hotel development.

At last month’s meeting, GVSHP presented conceptual proposals for a contextual rezoning of the area, as well as potential proposals for expanded landmark protections for the area; view a powerpoint of the presentation here, and a video here. In light of the overwhelming support expressed for moving ahead with seeking a contextual rezoning of the area, GVSHP has requested that Community Board #2 hear and consider supporting such a proposal. GVSHP’s contextual rezoning proposal would put in place height limits where none currently exist, eliminate current zoning bonuses for plazas and require new development to meet the streetwall, eliminate incentives for the construction of hotels and dormitories in the area, and as per the expressed priorities of the de Blasio administration, include incentives or requirements for the inclusion of a percentage of affordable housing in new development. The administration must support any rezoning proposal in order for it to be approved.

Attending the public hearing will allow you to find out more about the proposal, ask questions, and express your opinion about it to the Community Board, who will consider voting on whether or not to support the proposal. Community Board support is key to such a proposal moving ahead. Elected officials and/or their representatives, whose support is also key, are also expected to attend.