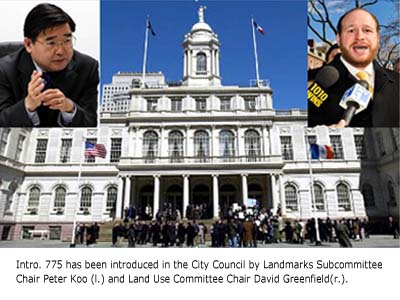 Next Wednesday, September 9th, a City Council hearing will be held on a bill that will drastically change NYC landmarks preservation protections. Intro. 775, if passed, would give those opposed to historic preservation a new tool to remove historic structures from our city.

“Intro. 775 would for the first time impose ‘do-or-die’ timeframes for buildings and neighborhoods being considered for landmark designation. If the deadlines are not met, buildings and neighborhoods, no matter how worthy or endangered, would automatically be disqualified for designation. Reconsideration would be prohibited for a period of five years, during which time demolition could proceed unhindered.

Had the bill’s draconian provisions been in effect over the last fifty years, more than half of our city’s landmarks and historic districts would not have been designated, since those designations took longer than the bill allows. Given that a significant number of owners of those properties originally resisted designation (though many later came to appreciate the benefits of landmarking), the bill’s five-year greenlight for demolition would have no doubt meant many beloved landmarks would have been lost.

Landmarked neighborhoods that took longer to designate than the bill requires include Greenwich Village and the Grand Concourse; Bedford Stuyvesant and Boerum Hill; Jackson Heights, Hamilton Heights (Sugar Hill), and the South Street Seaport, among many others. The Empire State Building, Rockefeller Center, Grand Central Terminal, and the Woolworth Building all also failed to meet the rigid deadlines Intro. 775 would impose.

The purported purpose of the bill is to prevent sites under consideration for landmark designation from staying in limbo indefinitely without a final vote. Right now there are 95 such sites in New York City that have waited over five years without a final determination on landmark status – less than 0.3% of all the buildings ever considered for landmark designation in New York City. By contrast, the problem Intro. 775 would create, represented by the more than 17,000 worthy landmarked structures which would have been disqualified for designation under the bill’s provisions, would be more than 170 times the size.

(It should be noted that the Landmarks Preservation Commission has agreed to vote upon the 95 undesignated sites within the next 18 months, essentially eliminating the bill’s entire raison d’etre.)

Ironically, Intro. 775 would do nothing to address the actual reasons why some landmark designations take considerable time. Those which run the longest typically are the most controversial or complicated, involving delicate negotiations with stakeholders, careful examination of final boundaries, exhaustingly-detailed research to back up the Commission’s conclusions, and meticulously detailed designation reports to aid owners in understanding the implications and parameters of designation. To meet these needs, the bill would provide no additional resources to the Commission, the smallest of New York City’s over 100 city agencies, in spite of its considerable mandate to regulate more than 33,000 landmarked properties and evaluate the historic resources of the entire city.”

Read the full op-ed here. Your help is needed. Please click here to send a letter to our elected officials to let them know you oppose this bill as it stands.