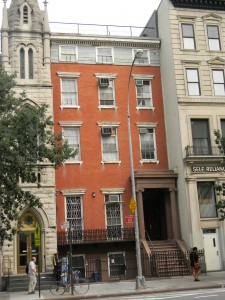 As part of NYCLandmarks50, the celebration of this year’s 50th Anniversary of the adoption of the NYC Landmarks Law in 1965, we took a look at some of the many and varied individual landmarks in our neighborhood.  On October 13, 2009 the Ralph and Ann E. Van Wyck Mead House (later Isaac T. Hopper Home of the Women’s Prison Association) was designated a New York City landmark — a designation enthusiastically supported by GVSHP.

Located at 110 Second Avenue in the East Village and built circa 1837-1838, this three-and-a-half story Greek Revival structure is a rare surviving house from the period when this section of Second Avenue was one of the most elite addresses in Manhattan. Additionally, it is also a rare surviving nineteenth century institutional presence in this ever-changing neighborhood.

The house at 110 Second Avenue was constructed as one of four houses built for brothers Ralph, Staats and Benjamin Mead and designed in the Greek Revival style. Although the only one remaining of the original four houses, 110 Second Avenue retains much of its original details characteristic of a Greek Revival row house. The façade is clad in machine-pressed red brick laid in stretcher bond, tall parlor-level windows with a cast iron balcony, a denticulated cornice and a brownstone portico with ionic columns supporting an entablature.

In 1839 David H. Robertson, ship-broker and tradesman, bought the house for his widowed mother, Margaret. Three years later, however, he declared bankruptcy. The house was foreclosed and in 1844 it was auctioned and transferred to Ralph Mead. Mead was the proprietor of Ralph Mead and Co., a wholesale grocery business. He and his second wife, Ann Eliza Van Wyck, lived at 110 Second Avenue (then No. 108) from 1845-1857. After that they leased the house, but continued to retain ownership until 1870. It was sold in 1872 to George H. and Cornelia Ellery who then sold it in 1874 to Women’s Prison Association and Home.

The Women’s Prison Association had been established in 1845 as the Female Department of the Prison Association of New York by Quaker abolitionists Isaac Tatem Hopper (1771-1852) and his daughter Abigail Hopper Gibbons (1801-1893). The organization’s mission was the “amelioration of the condition of female prisoners.” The Women’s Prison Association and Home was opened in 1845 in a rented house, known as the Hopper House, on Fourth Street (later moved to Tenth Avenue) in order to train and rehabilitate women either convicted of a crime or awaiting trial. The organization encouraged religion among the women and provided training in domestic skills, job placement and lodging all in an environment free from the supervision of men. In 1874 the organization purchased the home at 110 Second Avenue as a more suitable building for the organization’s mission.

To this day, the house is still owned by the Women’s Prison Association. In 1992 the Hopper House was renovated and re-opened as a residential alternative to imprisonment for women.  To find out more about the history of 110 Second Avenue, click HERE for the designation report.  To access more designation reports for individual landmarks in the East Village, click HERE. The Issac T. Hopper House can also be found on our Civil Rights and Social Justice Map at www.gvshp.org/civilrightsmap and on our tour of East Village individual landmarks on our East Village Building Blocks website (www.gvshp.org/buildingblocks).