In June, 2015 GVSHP was proud to award Barbara Shaum a Village Award. We are very sad to share the news that she passed away in September. Her longtime friend Eleanor Magid and her granddaughter Amity Paye shared a beautiful obituary they wrote with us:

Barbara Shaum, New York’s doyenne of custom-made sandals, died at her home in New York City on September 17, 2015. She was 86.

Ms. Shaum’s mastery of a fine and disappearing craft was based on lively ideas. As a Depression era child growing up in a small Pennsylvania town in the Allegheny foothills, the daughter of two lawyers, she witnessed hard times from the safety of her back porch. She was mesmerized by stories of lost work, financial insecurity, uprooting, forced migration, struggle, humor, and hope. At an early age she began trying to understand her own inherited, comfortable role in the world and to look for another path. 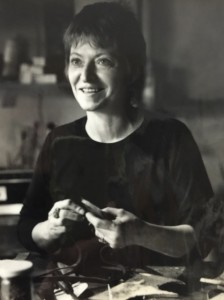 At twenty-one she relocated to New York City, arriving with one dollar and no plan. Though soon married, she made sure not to learn to type, and her life began to take shape as an independent. Enjoying drawing and work with her hands and being good at it, she was led to craft apprenticeship – to leatherworkers Walter Humphries in New York and Menalkas Duncan in Provincetown MA. Menalkas was Raymond Duncan’s son. Raymond was the brother of dancer Isadora Duncan, himself a dancer and craftsperson who had developed a philosophy of movement based on everyday life and work, focused on the evolution of the worker, the person, as much as the worker’s product and earnings potential. Through associations like these, Ms. Shaum established herself in what remained of the international Arts and Crafts Movement. In the late 1800s and early 1900s this movement had been widespread. Critical of industrialization, it advocated labor at human scale, simplicity of process, basic tools and styles. The movement was eventually eclipsed by a concept of Modernism in which much of the fine arts community made a certain peace with the otherness of the factory system and mass production. But some thoughtful artists, craftspeople and designers held on. (The Bauhaus in Germany and its artists were noted examples, as were Black Mountain College artists and teachers later on.) 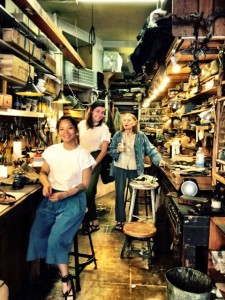 In 1962 Barbara Shaum opened her own shop on Seventh Street between The Bowery and Second Avenue in New York. She presided there for 25 years, offering custom sandals, bags, belts, and individual odd projects and repairs when asked. Her storefront existence allowed street contact with a spectacular range of Lower East Side and Bowery passers-by. She loved this exposure. She lived behind the shop and next door to the famed McSorleys Ale House that was officially first opened to women in 1970. In fact Barbara Shaum was hailed in the media as the establishment’s first female patron, but she said she’d been going there after hours for years, helping out there one way and another. Press attention about McSorleys seemed to trouble her. She wanted to be known for her own principles, for her impassioned stands on equal pay for women, on affordable rents for small businesses. She was an activist. Encouraged by Councilwoman Miriam Friedlander, she and other Lower East Side small business people of that era struggled hard against rising rents, nevertheless losing ground year by year. In 1985 Ms. Shaum was forced to leave the Seventh Street shop. Eventually she managed to open again on Fourth Street with the help of the Cooper Square Community Development Committee. By then she was fifty-six. She was still at work in the Fourth Street shop until shortly before her death.

Ms. Shaum’s work is easy to spot. Her clients recognize each other often and unexpectedly by a glance at one another’s feet – in Bilbao, In Athens, in Burlington, in Flushing: “Oh look: BARBARA SHAUM SANDALS!” And this is the case although she offered a large and historically pedigreed variety of styles. Handwriting, brushwork, subtle craft, they tell. In the early days she made a point of pricing her sandals on a sliding scale. She sometimes traded sandals for everyday chores, for sweeping the shop or taking rolls of leather down from high places or picking up and rearranging a rack of fallen belts. (Those were times, remember, when denim was still seen as proletarian cloth.) More recently Ms. Shaum’s work has gained elevated fashion status and quite a bit of press as googling will show. Her prices have risen. 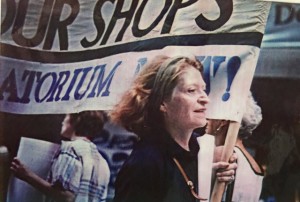 During her career most American footwear manufacture had been moved offshore – to China or elsewhere – withdrawing significant revenue and jobs from states like Maine. Ms. Shaum kept working in place, small scale, by individual order, on the Lower East Side, in New York, in the United States, albeit with a specialty kind of footwear whose message has steadily shifted shape. What is that message now?

Teaching was important to Barbara Shaum always. In 1965, the year after Freedom Summer, she traveled south in a pickup truck to teach in the Mississippi Liberty House collective. The big beautiful cloth bags later sold at Liberty House on Bleecker Street in New York City were one result. Brother Sebastian regularly came down to Seventh Street to learn how to make sandals for the monks of his Bronx monastery. Nearly anyone who came through her door and was enchanted by the cacophony of her crowded little shop and wanted to learn was accommodated. And then there was the perennially revolving band of true apprentices, promising craftspeople in their own right, many of whom, after rigorous training, moved into or founded other fashion and craft businesses, quietly extending her legacy. Barbara Shaum was extremely generous with the skills she transmitted and, beyond craft with her humor, the playful, irrepressible way she managed to synchronize her life and work. Many hope for her shop itself to thrive and evolve into the future.

A Celebration of Life will soon be announced.