Greenwich Village, the East Village and NoHo offer a vast array of architectural styles that span their long histories.  The Greek Revival style, which dominated these neighborhoods for much of the 1830s and 40s, and of which ample examples survive today, was in many ways inspired by an event which took place on March 25, 1821 five thousand miles away.

Following the Revolutionary War, New York was a town small in size compared to Philadelphia and Boston, though cosmopolitan in its make-up and appearance.  However, over the next fifty years, especially after the opening of the Erie Canal in 1825, New York rapidly established itself as a great commercial center, surpassing its rival cities in population and shipping trade.   As a result, a huge amount of building, and prosperity, followed.

Several factors influenced the appeal of this style, not just in New York but around the country.  Classically based architecture proliferated in Europe during the 18th century, which was based on the Roman model.  Archeological investigations at the beginning of the 19th century however proved that Roman architecture was derived from Greek architecture.  Riding on the fervor of nationalism that dominated the young nation, architects and government officials commissioning new buildings sought an “American” style with democratic connotations; the Federal style had come to be seen as too British in its origins.  Development of the Greek Revival style coincided with the emergence of the professional architect such as Benjamin Latrobe and William Strickland, who would be responsible for great public buildings designed in the Greek Revival style.  The popularity of the style in domestic architecture was also greatly aided by the proliferation at the time of carpenter’s guides and pattern books.  Perhaps most importantly, the Greek War of independence, begun on March 25, 1821 and waged through 1832, inspired many in the West to embrace the legacy of this birthplace of democracy and many aspects of western civilization, as it struggled to free itself from centuries of control by the Ottoman Empire.

The row house is the most ubiquitous form designed in the Greek Revival style in our area.  At first blush, the Greek Revival row house bares strong resemblance to the Federal row house.  They are both typically clad in red brick with brown stone or marble trim and three bays wide.  However, Greek Revival (as its name indicates) evoked associations with ancient Greece, and sought to convey a monumentality either as a singular house or streetscape befitting both the well-to-do residents and prospering city.  In the Greek Revival house the ceilings were generally taller than in a Federal house, adding to the structure’s stature.  The pitched roof  with dormers at the attic story of the Federal house was replaced by a full third floor and flat roof or one with a shallow pitch.  Brick joints were minimized to lend to a planar smoothness of the exterior wall.  Window lintels and sills had a minimum of ornament and were usually flush with the facade to further this planar unity.  At the entry surround both monumentality and simplicity were expressed and typically featured columns or rectangular pilasters supporting a full entablature.  The doorway was usually recessed and the stoop was adorned by ornamental ironwork.  This ironwork could also be applied to the parlor window balconies.  Finally, a denticulated or modillioned cornice would cap the facade, sometimes with small attic windows.

Examples of this style are found throughout our area. One of the most iconic streetscapes in the Greek Revival style is Washington Square North (1831-33).

Here the grandeur and uniformity of the Greek Revival style homes represented a move of the upper class from an increasingly-crowded Downtown up to the area around Washington Square. The elegant planar brick facades include such details as taenia (or ribbon) molding, keystoned windows at the white marble bases, and white marble stoops with massive white marble balustrades leading up to free-standing white marble porches with Ionic or Doric columns. Attic story windows are at the fascia boards beneath the denticulated cornices. All but one retain their original iron front fences with Greek motifs such as anthemia, Greek keys, and lyres, further exemplifying the stylish sophistication of the Row.

Another of the most spectacular groupings of Greek Revival dwellings is Colonnade Row (1832-33) on Lafayette Street.  First named LaGrange Terrace, it was built as nine marble front houses, five of which were torn down in 1901, with four remaining.  Here the singularity of the individual house is subservient to the unity of the monumental streetscape with a heavily articulated base supporting two stories fronted by full height colonnade of free-standing, Corinthian columns.  The entire ensemble was capped by a heavy bronze cornice.  According to the LPC designation report, 424-438 Lafayette Street was the home to many influential Americans including the Vanderbilts, Astors, Gardiners, the wife of President Tyler (who hosted their post-wedding breakfast there), FDR’s grandfather, and Edward Morgan, former NYS Governor.

Greenwich Village also boasts an excellent example of a Greek Revival style church, St. Joseph’s on Sixth Avenue.  Built in 1833-34 and designed by John Doran, it is temple front in form and the recessed entry is fronted by two full height, free-standing, fluted Doric columns.  The cornice features triglyphs at the front and sides and the low pediment caps the front elevation. 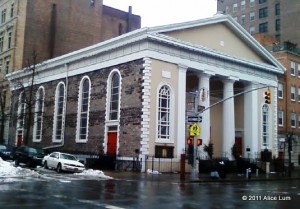 Next in this series, we will look at styles which proliferated in the mid-19th century and are associated with the Romantic movement.

5 responses to “What Style Is It? Greek Revival Edition”