Your input is needed! Today we feature our latest Business of the Month — and we need your help selecting the next. Tell us which independent store you love in Greenwich Village, the East Village or NoHo: just click here to nominate your favorite.  Want to help support small businesses?  Share this post with friends.

Whether you live near Avenue C between 4th and 5th Streets, or have to make the voyage from afar, there is arguably only one place in New York to get the best traditional Puerto Rican cuisine and ambiance: Casa Adela.

Located at 66 Avenue C, the Loisaida institution calls itself “The Restaurant of Authentic Puerto Rican Cuisine since 1976,” and no one questions the assertion. At 80 years young, namesake owner Adela Ferguson herself is there on a daily basis, from early morning til closing time.  Many of those who nominated Adela’s restaurant noted that she is like your abuela or grandmother, creating a unmistakably homey atmosphere.

With neighborhoods changing so fast these days due to escalating development pressures, it is always inspiring to see a neighborhood institution not only hang on, but thrive.  Casa Adela is one of the most palpable exemplars of the rich Puerto Rican heritage of the neighborhood, and shows no sign of waning.

“It really feels like you are at your Aunt’s house and she’s talking to her friends and making you a meal at the same time,” said one nomination about the owner, who not only cooks but runs the restaurant as well.

The nominations came pouring in for this neighborhood cafe and restaurant, with some saying “Try the mofongo!”.  (Nominate your favorite business here.)

Mofongo (Spanish pronunciation: [moˈfoŋɡo]) is an Afro-Puerto Rican dish with fried plantains as its main ingredient. Plantains are picked green and mashed with salt and water  to produce a tight ball of mashed fruit that absorb the juices of broth and garlic and olive oil and have pork cracklings (Chicharrón) inside.

Casa Adela was also the winner of the most Tonic Chicken Soup award from the Village Voice.  They noted that in the bowl you will find a big hunk of chicken, with vegetables like carrots, potatoes, and orange squash, with oregano and plenty of garlic.  The rotisserie chicken rotating behind the counter is said to be the best in NYC, and Emma Pearse wrote about it in the New York Times, with great photos by Edwin Torres.

For seafood lovers there is a codfish dish in tomato sauce with onions, potatoes, olives, raisins and garlic – Bacalao ala Vizcaina. Or reach for the Ensalada De Pulpo (octopus salad).

Vegetarians can feast on the delicious rice and beans.  There’s also plenty of salad and avocado (ask for yucca and onions), or platanos con ajo (plantains with garlic.)  Adela also makes fresh orange juice and a great strong coffee. 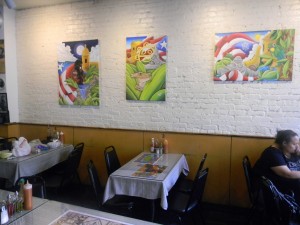 Casa Adela is known for supporting an array of arts and cultural activities with Puerto Rican pride.  The walls are currently adorned with colorful paintings that feature the coqui (frog),  Atabex (Taíno Mother Goddess of Earth, fertility,waters), a cemi (a sculptural object housing an ancestral spirit), a parrot, as well as lush scenes harkening to the beauty of the island and the  Taínos who lived there before the arrival of Columbus.

And this weekend, if you are going to enjoy any part of the 29th Annual Loisaida Festival, stop by Casa Adela. They deliver, and can cater your event to bring that Puerto Rican cuisine to your home or party.

The caring nomination from Richard Ramirez puts it best:

“Apart from the great food, the ambiance and the diversity is second to none.  It’s the East Village at its best — it’s loud, it’s small, but it’s warm and authentic, and it pulsates with the Lower East Side vibe. It’s a unique experience to say the least. Every Latin star that you can think of has made their way to this little storefront on Fourth Street and Avenue C, from the likes of Jimmy Smits, Rosario Dawson, Ruben Blades, John Leguizamo, Fat Joe, Michael Stuart, to Eddie Palmieri, Tony Vega, El Gran Combo.  Even the Food Network’s very own Chef Aaron Sanchez found his way to this culinary icon. The list could go on detailing all of the cultural and political celebrities that made their way to Casa Adela.”

He went on: “Its owner is …an urban icon, she is a modern day phenomenon, she is eighty years young and she is at the restaurant on any given day between the hours of four thirty and five in the morning, getting her kitchen ready for her patrons. To see her in action is worth the visit; to taste her food is just an added delight. Upper Manhattan has Sylvia’s (soul food); Lower Manhattan has Adela’s best Puerto Rican cuisine in town! If you come once I can assure you will come back again. ”

We couldn’t have said it better ourselves.