On this date in 1904 more than 1,000 New Yorkers perished  when their steamboat burst into flames on the East River near the foreboding Hell’s Gate section south of Ward’s Island.  The Captain questionably plowed ahead and beached the flaming vessel ashore North Brother Island, across from the South Bronx. The greatest loss of life in New York before 9-11, it has been said that the Slocum Disaster was the end of the German immigrant community in the East Village. Two years later the oft-overlooked Slocum Memorial Fountain was installed in the park. Today we will recognize the tragic events and heroic rescue efforts events of that day, and the 110th year since this monument was installed at an evening program. 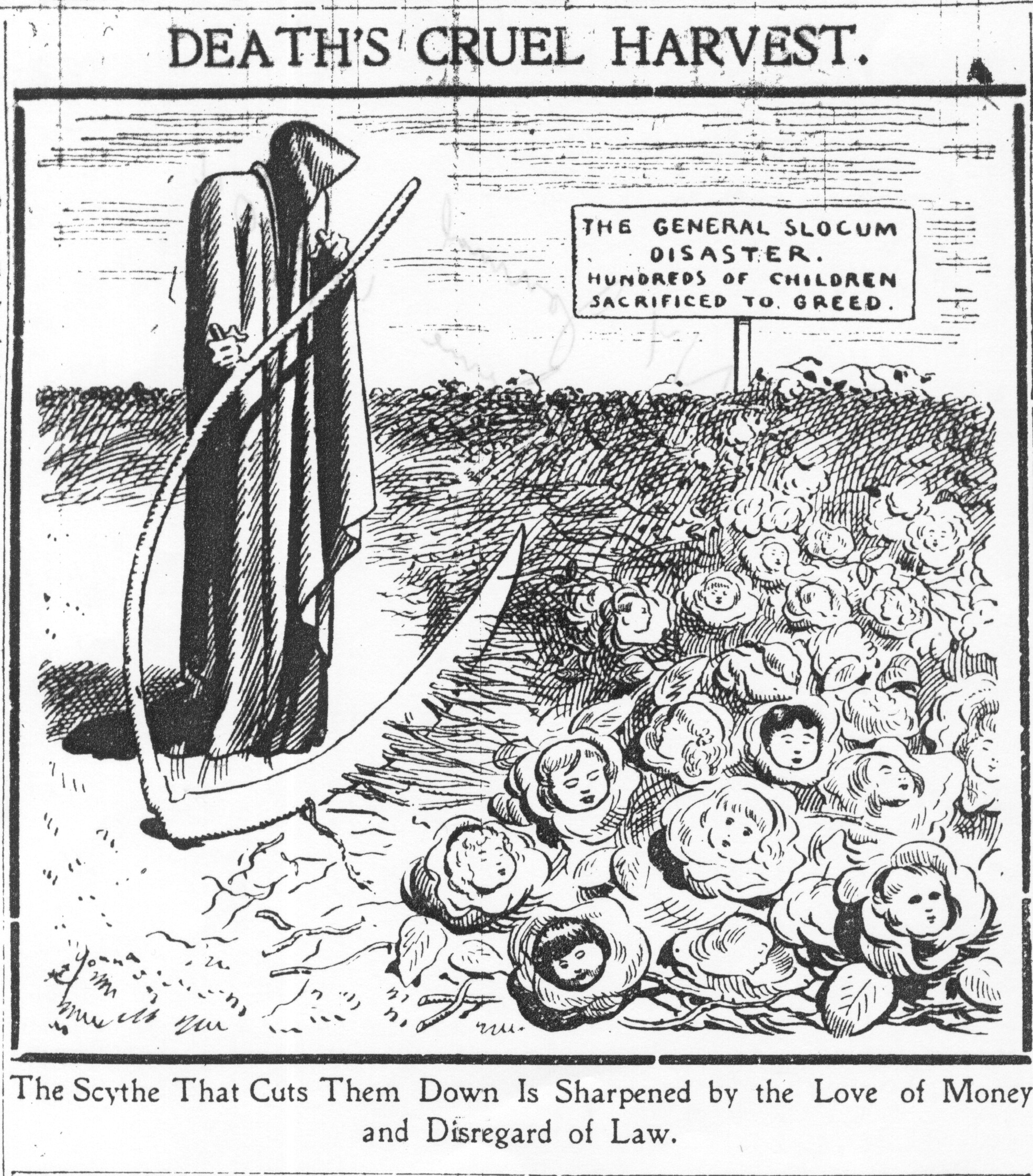 After a brief presentation there will be a 1 hour walking tour of what was then referred to as Kleindeutschland or “Little Germany,” as we visit sites of importance to the historic German-American community around the park.  There will be a map for a self-guided tour at your own pace as well.   Many of these uniquely designed buildings remaining standing  and are located in the East Village/Lower East Side Historic District GVSHP and our allies successfully advocated for.  Learn more about some of the history from a previous post on our blog Off the Grid.

The walk will be guided by Edward T. O’Donnell, historian, author, tour guide, and Associate Professor of History at Holy Cross College in Worcester, MA. He is the author of Ship Ablaze: The Tragedy of the Steamboat General Slocum and several other books.

Many residents continued a trend and moved out in despair, many populated the Yorkville neighborhood of the Upper East Side where they made their home congregation at Zion-St. Mark’s Evangelical Lutheran Church and other locations.

South Bronx Congress Member Jose E. Serrano has previously introduced federal legislation  to authorize the Secretary of the Interior to study the suitability and feasibility of designating a section of the South Bronx coastline and North Brother Island in the Bronx in the State of New York as a unit of the National Park System.  One ideal location for such a remembrance that would parallel and expand on that of the Slocum Memorial Fountain in Tompkins Square Park would be the Port Morris Gantries.  A ferry ran between that part of the coast of the mainland and North Brother island where the Slocum journey tragically ended.  The gantries were selected by Historic District Council as one of their Six to Celebrate, and it is part of the local community plans for the waterfront access.

Many diverse communities were united in this tragedy.  According to an official report commissioned by President Teddy Roosevelt the loss of life was due in large part to the greed of the ferry operators that did not have properly tested safety equipment of a quality that would save lives.  Legislation was subsequently introduced that would ensure stricter standards and inspections and improve safety on the at River and the New York Bay area.

Join us as we take a moment to learn from the past to impact the present and the future.

Leave a Reply to William A. Miecuna Cancel reply