At 283 Bleecker Street, a charming green awning once announced the name of an equally charming shop – Second Childhood, a local 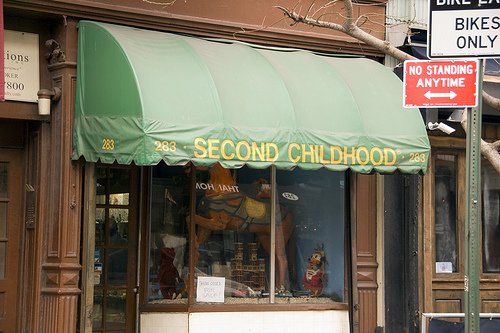 business dedicated to antique and unique toys for children of all ages. Owned by longtime neighbor Grover Van Dexter, who preferred to be called simply “Van,” this Bleecker Street shop was the quintessential Village staple.

Dexter was originally drawn to New York to pursue acting. He fell in with the Village theater scene, working with Martin Landau, Shelley Berman, and Jean Erdman on her award-winning “The Coach with Six Insides.” He even lived with Steve McQueen, who he met while working at Whelan’s pharmacy on Sixth Avenue and 8th Street. Dexter said McQueen, not yet famous, was a powerful personality who used the entire Bleecker Street apartment building as a rehearsal space – the stairwells, roof, and hallways. Apparently McQueen drove everyone in the building crazy, until those stairwell rehearsals paid off and he became a superstar.

Dexter fell in love with rare and unique toys after a 1960 tour had him traveling to cities all over America. He became an avid collector, and by 1969 his collection had outgrown his small Village apartment. With some nudging from his cramped roommate, Dexter capitalized on the inexpensive rents and vacant space lining much of Bleecker and surrounding Village streets. Rent was cheap ($150 for the storefront!), so passion projects like Dexter’s toy shop could flourish in the eccentric and eclectic neighborhood. Second Childhood became beloved across the city, and appealed to serious collectors as well as casual shoppers. The store appeared in myriad New York guidebooks and even had a reputation for offering respite to harried businessmen on their lunch breaks, looking to retreat into the world of play during a hectic work day.

Second Childhood had it all – wooden carousel horses, cast-iron banks, doll furniture, toy cars, marionettes, soldiers, and more. He sold high-quality and rare contemporary toys alongside the antiques, making the shop as surprising, eclectic and essential as the neighborhood in which it thrived. Many fondly recall Second Childhood as their source for rare and desirable Japanese toys in the 1970s, perhaps due to the involvement of Dexter’s partner Yoji Morimoto, a native of Japan.

To Village families and farther-flung toy collectors, Van Dexter was always a familiar site behind his counter. Perhaps because he was a toy collector before a purveyor, he truly loved the daily work of owning and managing the shop. Decades of customers have recounted the quick and pleasant conversation Dexter always extended to regulars and tourists alike, and his perpetual passion for the collection and admiration of these toys.

Dexter and his green awning presided over Bleecker Street until 2008, when rising rents and old age forced the end of Second Childhood. When the shop closed, he sent most of its inventory, including his own collection, off to auction. In his late 80’s by then, Dexter was aging but still spry. Many conjectured that it was his deep enjoyment for his profession that accounted for his longevity and health.

Second Childhood has been sorely missed on Bleecker Street since its 2008 closing. And Dexter himself has been missed in the Village since his death in early 2015. A fixture in the community, Dexter brought joy, play, and nostalgia to the Village for decades. Shops like his make the everyday lives of Villagers so rich, which is why GVSHP honors and promotes local business each month. These personal, one-of-a-kind shops are essential to our neighborhoods. If you’d like to honor a special business in Greenwich Village, East Village, or Noho, fill out a nomination today! We’re always looking for the next great business to highlight.

And if have your own memories of Van Dexter and Second Childhood, please share! Maybe you even still have some toys you bought there? We’d love to hear from you – start the conversation in the comments below.