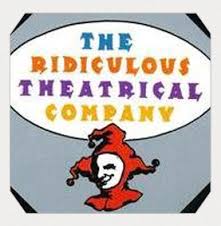 A significant chapter in the Village’s extensive theater history belongs to The Ridiculous Theatrical Company.  Founded in 1967 by dramatist, actor and agent provocateur Charles Ludlam, the Ridiculous Theatrical Company (RTC) was part of the theatrical genre, the Theater of the Ridiculous.  This was an American movement that started in 1965 with its beginnings in John Vaccaro and Ronald Tavel’s “The Play-House of the Ridiculous.”  Ludlam performed and wrote for The Play-House but, following a dispute with Vaccaro, broke with the group and founded RTC.  Over the next twenty years, Ludlam and RTC led the countercultural theatre scene in the West Village and would change theater in America for the next generation.

As a genre, “Ridiculous” theater stood in contrast to mid-20th century theater trends of employing naturalistic acting and realistic settings.  Instead, it offered a very broad style of acting, often with surrealistic settings and props, and brought some elements of queer/camp performance to avant-garde theater.  Cross-gender casting was common, with players often recruited from non-professional sources, such as drag queens or other “street stars”.  The scenarios used in “Ridiculous” plays were often parodies or re-workings of pop-culture fiction, used as vehicles for social commentary or humor.  Improvisation played a large role in the often chaotic Ridiculous productions, where the script was treated as a mere starting point.  As Bonnie Marranca stated in her preface of Theatre of the Ridiculous: “A highly self-conscious style, the Ridiculous trends toward camp, kitsch, transvestitism, the grotesque, flamboyant visuals, and literary dandyism.  It is comedy beyond the absurd, because it is less intellectual, more earthy, primal, liberated…Its dependency on the icons, artifacts, and entertainment of mass culture in America – the “stars,” old movies, popular songs, television, and advertising – makes the Ridiculous a truly indigenous American approach to theatre.”

Charles Ludlam was born on Long Island in 1943 and received a degree in dramatic literature from Hofstra University in 1964, by which time he had officially come out as gay.  He first joined The Playhouse of the Ridiculous, then performing in the East Village, and went onto found the Ridiculous Theatrical Company in 1967.  Ludlam, as the RTC’s resident playwright, director and lead actor, would refine the Ridiculous genre over the next 20 years.

Ludlam’s early plays followed the style set forth by The Play-House by being grand in scope and unconcerned with plot.  These included Big Hotel, Conquest of the Universe (both also performed with the Play-House), Turds in Hell, and The Grand Tarot.  However, between 1970 and 1980, Ludlam’s style would evolve, and he relied on the format of the French “well made play” and reinvented the classics creating some of his most memorable roles.  Bluebeard was based on the opera Bluebeard’s Castle and HG Well’s novel Island of Dr. Moreau and Stage Blood was based on Shakespeare’s Hamlet.  Also during this time, Ludlam played his most infamous role in his rewrite of Dumas’ play Camille, where he played Marguerite Gautier wearing a very low cut period dress displaying his hairy chest.  The success of these plays and others offered the troupe financial stability and they were able to lease permanent space in the basement at One Sheridan Square.

Ludlam’s work during this next and tragically final phase, concentrated on farcical situations in American settings.  His reputation grew and he began to appear in television, film and was offered to bring one of his productions to Broadway.  He won fellowships from several foundations and grants from the National Endowment for the Arts and the New York State Council on the Arts.  Additionally he won six Obie Awards and the Rosamund Gilder Award for distinguished achievement in the theater in 1986.  In 1987, Ludlam was diagnosed with AIDS and died that same year at St. Vincent’s Hospital of PCP pneumonia.  The street in front of his theatre in Sheridan Square was renamed “Charles Ludlam Lane” in his honor.  In 2009 he was inducted posthumously into the America Theater Hall of Fame.

3 responses to “The Ridiculous Theatrical Company”