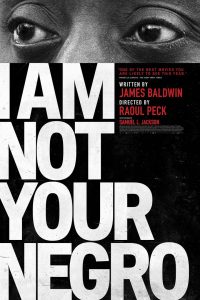 This week, James Baldwin, one-time resident of Greenwich Village, returns to his old neighborhood — on the silver screen at least. Film Forum is showing the new documentary I Am Not Your Negro, based on Baldwin’s unfinished text Remember This House, and directed by Raoul Peck. Narrated by Samuel L. Jackson, the film explores the history of racism in America – a topic at which Baldwin is searingly adept at illuminating. Using Baldwin’s observations and remembrances of civil rights leaders Medgar Evers, Malcolm X and Martin Luther King, Jr., the documentary places Baldwin’s personal experiences within the context of the country and illustrates Baldwin’s inspiring words with the stunning imagery of the Civil Rights Era. The film has earned rave reviews, not in small part, I imagine, because of how timely the topic still seems today.

The film is playing all week at the Film Forum on Houston Street, which incidentally is just a short walk from Baldwin’s former residence at 81 Horatio Street. As a black, gay man, the Village was a crucial community for Baldwin to explore his identity and meet others like him. While he was living in Harlem, where he was born, he often visited friends in the Village. But by his mid-30’s, he had moved into the Horatio Street townhouse. (Read more about James Baldwin in another Off the Grid post from 2015.)

He wrote about the Village in his novel “Another Country,” published in 1962:

“They reached the park. Old, slatternly women from the slums and from the East Side sat on benches, usually alone, sometimes sitting with gray-haired, matchstick men. Ladies from the gigantic apartment buildings on Fifth Avenue, vaguely and desperately elegant, were also in the park, walking their dogs; and Negro nursemaids, turning a stony face on the grown-up world, crooned anxiously into baby carriages. The Italian laborers and small-business men strolled with their families or sat beneath the trees, talking to each other; some played chess or read L’Espresso. The other Villagers sat on benches, reading – Kierkegaard was the name shouting from the paper-covered volume held by a short-cropped girl in blue jeans – or talking distractedly of abstract matters, or gossiping or laughing; or sitting still, either with an immense, invisible effort which all but shattered the benches and the trees, or else with a limpness which indicated that they would never move again.”

In 2015, GVSHP and Two Boots commemorated Baldwin’s time in the Village with a plaque at 81 Horatio Street. Unsurprisingly, the event drew many Baldwin admirers, scholars, and even family –  Trevor Baldwin, a nephew of James, was in attendance as well as 2015 Pulitzer Prize Winner for Poetry Gregory Pardlo, writer and Villager Fran Lebowitz, and Max Rudin, publisher of the Library of America, which in 2015 released a third volume of Baldwin’s collected works.

This week, we recommend pairing the documentary at Film Forum with a stroll to 81 Horatio. Flyers will be available in the Film Forum lobby to help you walk there. Take in Baldwin’s riveting and far-reaching account of racism in America, and then stand in the intimate history of Baldwin’s personal life. Aren’t we so lucky to be so closely connected to history in the Village?