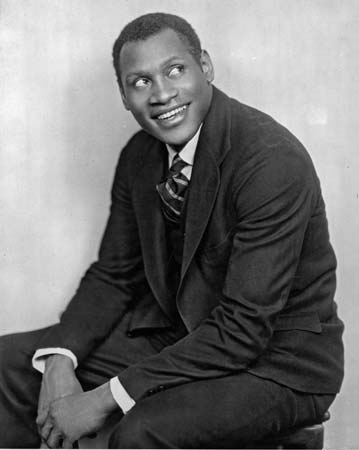 Although Paul Robeson is most strongly associated with the Harlem Renaissance, this dynamic public figure cut his teeth on the Greenwich Village theater circuit and fully embraced the bohemian, progressive, and activist lifestyle that made the neighborhood so famous. A college football star, lawyer, actor, and activist, Robeson was even the subject of a great sculpture by Antonio Salemme, for which he posed in the artists’ studio overlooking Washington Square. It’s no exaggeration to call Robeson a true Renaissance Man. He’s also one of many prominent figures featured on GVSHP’s Civil Rights and Social Justice Map.

Paul Robeson was born on April 9, 1898 in Princeton, NJ. His father escaped from slavery as a teenager and became a minister, a job that young Paul sometimes filled in for when necessary. Paul’s leadership abilities did not end at the pulpit – his high school career in Princeton was impressive and varied. He excelled in academics, athletics, and drama. He received accolades, but also racist taunts for his audacity to insert himself so ably into these arenas.

Robeson won a scholarship to Rutgers University, where he became just the third black student to ever enroll, and the only black student enrolled during his tenure there. He continued his athletic excellence and was named All American in 1917 and 1918. Improbably, Robeson pursued football, law, and acting simultaneously. He enrolled in NYU Law then Columbia Law, where he continued his football and acting careers. He even played on two NFL teams while getting his law degree.

But despite excelling at nearly everything he tried, performing would be where Robeson’s found his fame. After earning a reputation in New York as a preeminent black actor, he was pursued by actors involved in the Provincetown Theatre. It was this long-lasting relationship with Eugene O’Neill and the Theater that would shape Robeson’s career, life, and public persona. He began by starring in O’Neill’s All God’s Chillun Got Wings and The Emperor Jones, two plays with daring racial overtones. There was no one in the business who was unflinchingly writing on these topics like O’Neill, and Robeson found the subject matter refreshing, exciting, and challenging.

At the same time, Robeson dove into the social scene of the Village. A coffeehouse upstairs from the theater frequently played host to long nights of conversation and debate between the actors, and Robeson found the atmosphere both accepting and stimulating. “The bohemians were like my own people,” he said, “and I liked them. Your color and your bank account made no difference to them.” It was among this milieu that Robeson began posing nude for sculptor Antonio Salemme. In his studio overlooking Washington Square, Salemme sculpted Robeson from bronze and called the work “Negro Spiritual.” It was such a sensation at the time, that Villagers would visit the studio while Robeson was sitting for Salemme. Surely the fact that Robeson was black had some indiscreet Villagers gawking, but Robeson’s dynamic intellect, his acting prowess, and his especially athletic body made his public persona one that invited awe and excitement. Salemme’s work with Robeson was such a sensation that 71 years later, upon Salemme’s death, his New York Times obituary headline read “Antonio Salemme, 102, Painter and Sculptor of Robeson Nude.”

Robeson’s experiences in Greenwich Village were not free of encounters with racism.  According to his wife, she and Robeson were unable to find a landlord willing to rent them an apartment in Greenwich Village, and he would have to travel to Penn Station or even Harlem to find a place to serve him food when on break from working at the Provincetown Playhouse.

Nevertheless, the Greenwich Village social scene, and the progressive plays of Eugene O’Neill, made Robeson feel that theater, rather than law, was actually a more effective way to affect change. It was upon this realization that Robeson quit law entirely to pursue a career in performance – a career that spanned more than forty years and included expert turns at singing and acting for both stage and film. Robeson, like all good Village bohemians also threw himself into activism. He was deeply involved in issues of American Civil Rights and anti-fascism, and even founded the American Crusade Against Lynching in 1946. Robeson’s activism caused him to be blacklisted and investigated – his stellar football career was wiped from the record books, public appearances were cancelled, and he was denied access to a passport.

Paul Robeson was an exceptionally talented and driven man, whose star was bright and vibrant. It’s no surprise that he was drawn to the theatrical and social scenes in Greenwich Village, and the neighborhood was certainly the better for his presence. On the occasion of this remarkable man’s birthday, take a moment to remember his inspiring and challenging life and work, and his legacy in the struggle for equality and justice.

If you’re interested in learning more about civil rights and social justice in Greenwich Village and the East Village, check out our Civil Rights and Social Justice map, which includes over a hundred additional sites connected to African-American, women’s, immigrant, LGBT, Latino/a, and other civil rights movements. And let us know if you think there’s a related site that should be included! Send us all the details at info@gvshp.org.