On August 29, 1920, Charles Parker Jr. was born in Kansas City, Kansas.  A towering figure in American jazz, he spent his final years in New York, and lived at 151 Avenue B, in a now-landmarked building often referred to as the “Charlie Parker House,” from 1950 to 1954, one year before his untimely demise.

Parker was a prolific jazz saxophonist and composer, and a leading figure in the development of bebop.  He acquired the nickname “Yardbird” early in his career, which was then shortened to “Bird”, which he used for the rest of his life.  The nickname inspired the titles of a number of his works, such as “Yardbird Suite”, “Ornithology”, “Bird Gets the Worm”, and “Bird of Paradise”.

Parker’s Avenue B home was designated a landmark in 1999.  From the Landmark Preservation Commission report:

‘”Charlie Parker, called “Bird,” was a world-famous alto saxophonist and jazz composer. From late 1950 through October 1954 he and his common-law wife Chan Richardson occupied the ground floor of No. 151 Avenue B, located midblock between East 9th and East 10th Streets, opposite Tompkins Square Park. Two children, a boy and girl, were born to the couple during their residency here. Parker first arrived in New York City in 1938 or 1939, and soon established himself as one of jazz’s most gifted and influential performers. He moved into the apartment at the height of his career, having achieved considerable success and renown as the co-founder of bebop, the modem jazz style that he and trumpeter Dizzy Gillispie created in New York City during the mid-1940s. While living on Avenue B, Parker enjoyed international fame; recording with small and large ensembles, as well as with Latin big bands and string sections. The Parker residence is also a rare example of a rowhouse designed in the Gothic Revival style. Built circa 1849, the most significant architectural element is the well-preserved pointed arch entranceway with clustered colonettes that is surmounted by a prominent horizontal hood mold. Original details include the double wood doors, a trefoil relief beneath the projecting box cornice, as well as the slender hood moldings above most windows. ”

Built in l849, the 3 story Gothic Revival-style rowhouse is one of the few remaining in this style in our neighborhood. You can learn more about The Charlie Parker Residence here. 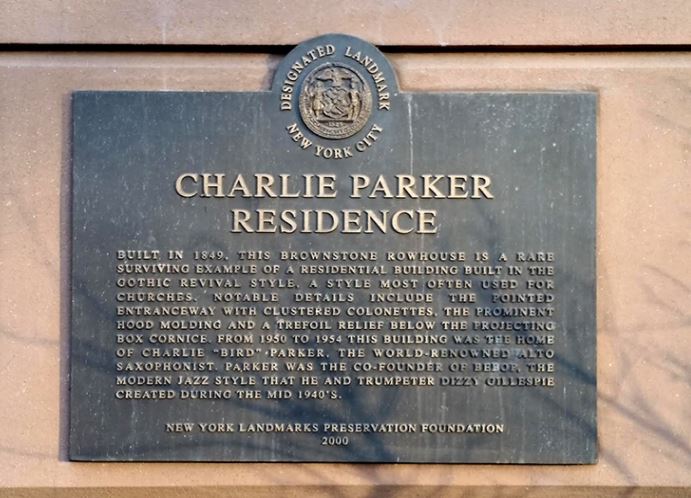 Although he has been gone for many years, his spirit lives on in the neighborhood.  Every year around his birthday The Charlie Parker Jazz Festival is held in Tompkins Square Park and in Harlem where he often performed.  This past Sunday marked the 25th uyear of the festival.

It’s a good day to listed to some of his music: