The following is a re-posting of a post by Elizabeth Finkelstein from 2011:

Call it whatever you’d like: antique, vintage, or historic. If one thing is for certain, the Village is really, really old. Old by New York City standards, and even old by American standards. But which building is the oldest of the old? 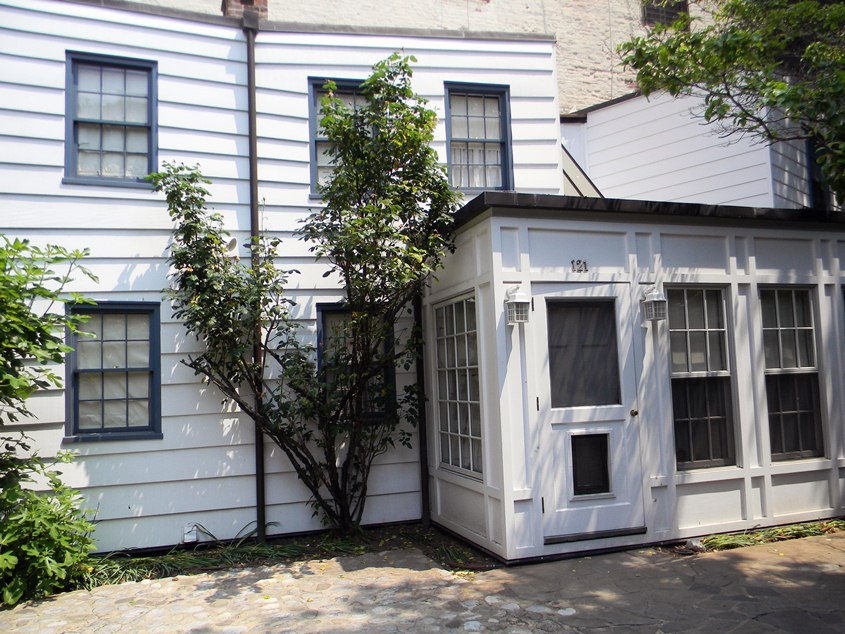 Fortunately for us as we attempt to answer this question, the Village has been well researched. We know the histories of many West Village buildings because a large number of them are included within historic districts (which means the Landmarks Preservation Commission has authored designation reports with information including dates of construction for each, which can all be read on our Resources page.). The same is true for a portion of the South Village, for much of NoHo and the Meatpacking District, and for a tiny section of the East Village around Stuyvesant Street known as the St. Mark’s Historic District. As far as the non-landmarked sections are concerned, we have done our own research on every single building in the South Village and in the East Village.

So we had oodles of information to pour over as we took on the task. Let’s take a look at some of the contenders. 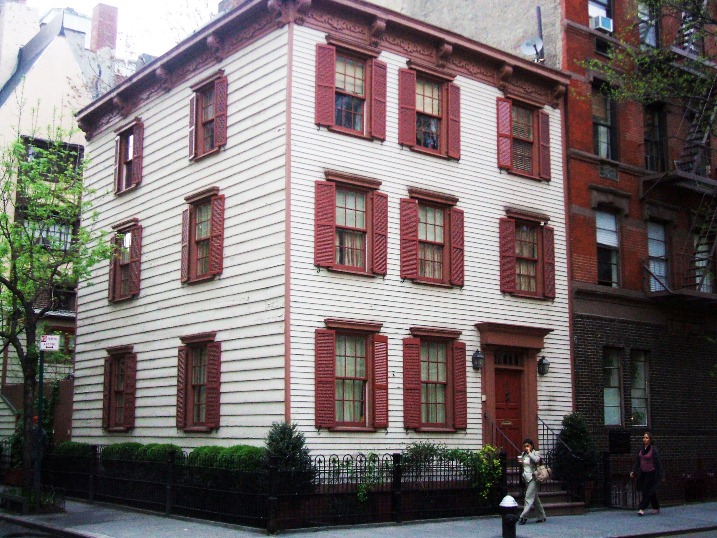 We’ll start on the west side. On the corner of Grove & Bedford Streets sits this lovely wood frame house, which we were lucky enough to sneak a peak inside during our 2007 Annual House Tour Benefit. Because of NYC fire codes, it’s rare to find wooden houses anywhere in Manhattan, but No. 17 Grove Street has survived in near-pristine condition. Built in 1822, it was originally only two stories high and gained it’s top floor in 1870, which is presumably when it’s Italianate-style cornice was added. The original owner, William F. Hyde, was a sash maker and likely made many of the house’s double-hung windows. 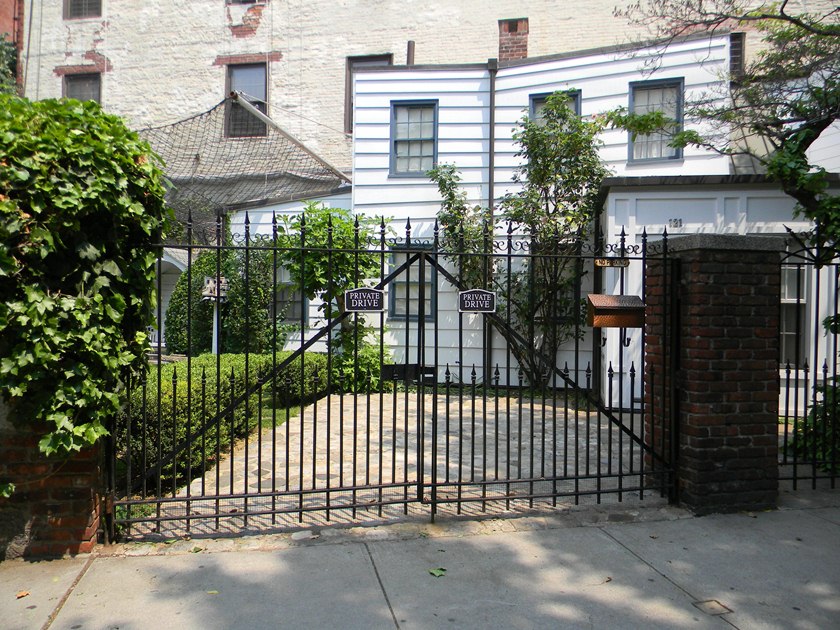 Moving slightly north, we come to the anomaly that is No. 121 Charles Street. Who hasn’t wondered about this house? It’s as if a farmhouse, in the manner of a spaceship, fell from the sky and landed smack in the middle of a dense urban setting.

Which actually isn’t far from the truth – the house actually was transported here from another place. Prior to its move here in 1967, the house stood on a rear lot at 71st Street & York Avenue, where it was occupied briefly in the 1940s by Margaret Wise Brown, author of ”Good Night Moon.” A couple decades later, when it was slated for demolition by the Roman Catholic Archdiocese of New York, its owners saved the house by moving it downtown to its current location (more on this can be found at New York Daily Photo).

An exact date of construction for the house has yet to be determined. It first appeared on tax maps on York Avenue in 1898, suggesting that it was built elsewhere and moved to York Avenue in the mid-19th century. Since we don’t know when it was built, we can’t yet claim that it’s the oldest house in the Village, but we can say for sure that it’s one of the most intriguing. 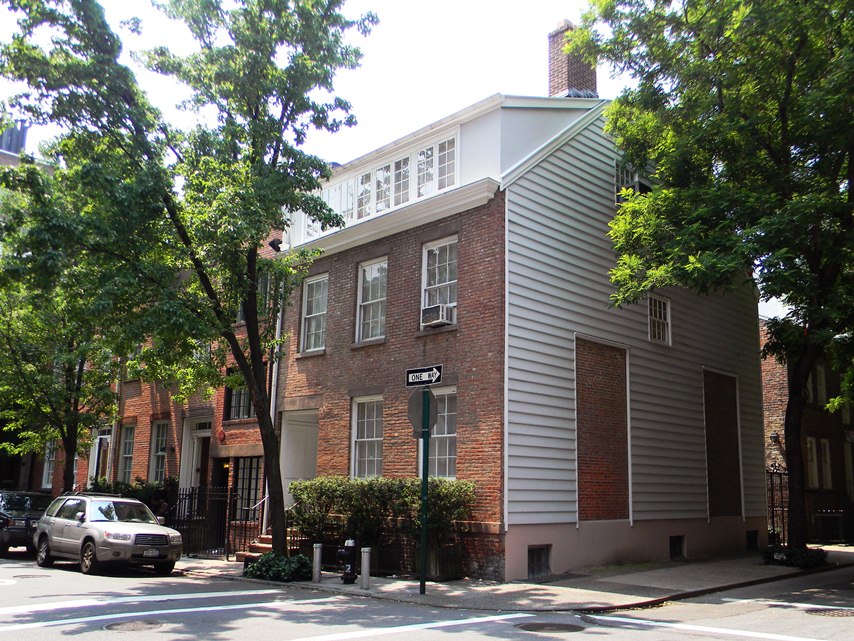 Even older is the 1799 Isaacs-Hendricks House at 77 Bedford Street, on the corner of Commerce Street, which was originally a wooden house; its brick front was added in 1836. What’s even harder to imagine is that it was originally a free-standing building surrounded by undeveloped land! A year after its construction the house was bought by Harmon Hendricks. Hendricks and his brother-in-law Simon Isaacs, according to the LPC’s designation report, “were New York agents of Paul Revere, who laid the foundations for the copper-rolling industry in America.” Around 1812, Isaac & Hendricks set up their own copper rolling factory in Bellville, NJ, where they supplied copper boilers for a number of ships (keep in mind that a large shipbuilding industry thrived along the NYC waterfront at that time). In an interesting twist, the factory also supplied copper for the Savannah, the first steamship ever to cross the Atlantic. Followers of GVSHP will recall in the fall of 2010 we fought hard to save 326 & 328 East 4th Street, developed by Francis Fickett, the Savannah’s builder.

The construction date of 1799 makes the Isaacs-Hendricks House the oldest extant house in Greenwich Village. But is the oldest house in the entire Village? Let’s wander a little east to see what we can turn up… 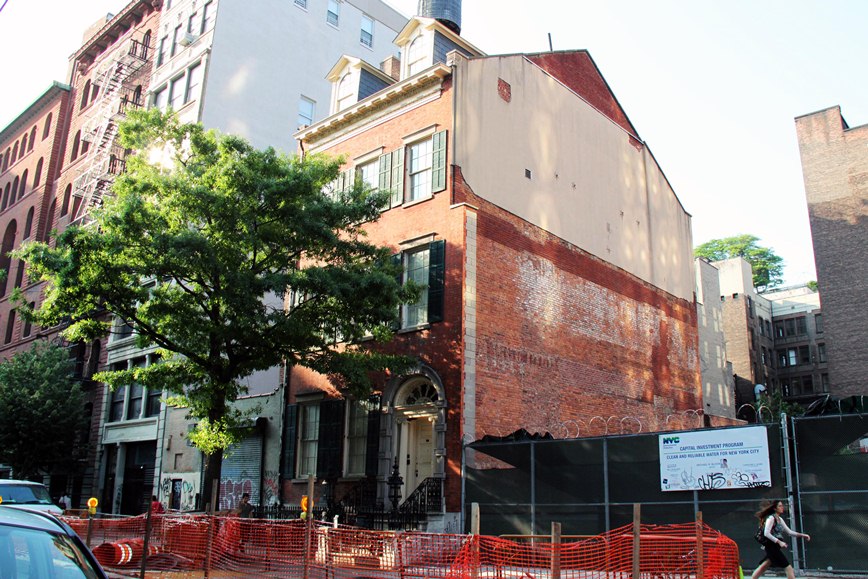 Our first contender on the east side is the Merchant’s House Museum at No. 29 East 4th Street, aka the Seabury Tredwell House and arguably the Village’s most well-known historic house. One of the city’s first landmarks, the beautiful late Federal-style residence was originally one of a row of six near-identical houses all built together in 1832. Today, its is the only 19th century home in Manhattan that has been preserved completely intact on both the interior and the exterior. Gertrude Treadwell was born in this house in 1840 and lived here until her death at age 93!

Alas, though Gertrude may have been the oldest person on the block, a construction date of 1832 means the Merchant’s House Museum is not the oldest house in the Village. 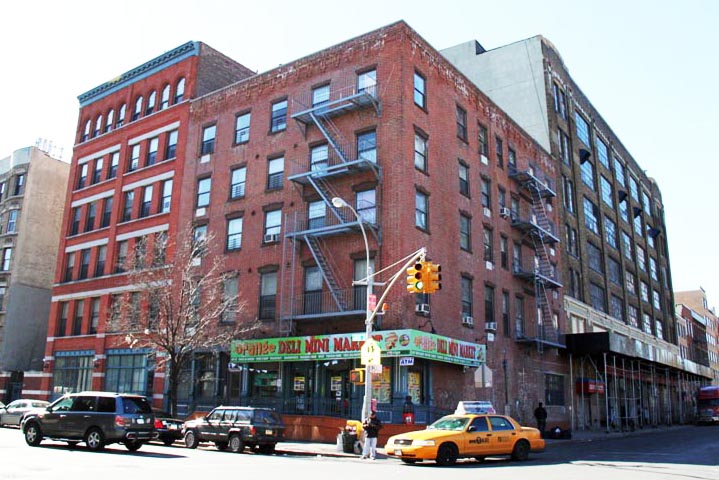 Moving all the way east, we come to an even earlier building at 143-145 Avenue D, which Off the Grid has covered recently in a series of posts (see parts one, two and three and four, and stay tuned for the next installment to be published soon). Originally used as the Dry Dock Banking House, it was built in 1825, when the surrounding neighborhood was virtually uncharted territory. While this makes it by far the oldest extant building in Alphabet City, it is certainly not the oldest in the entire Village. 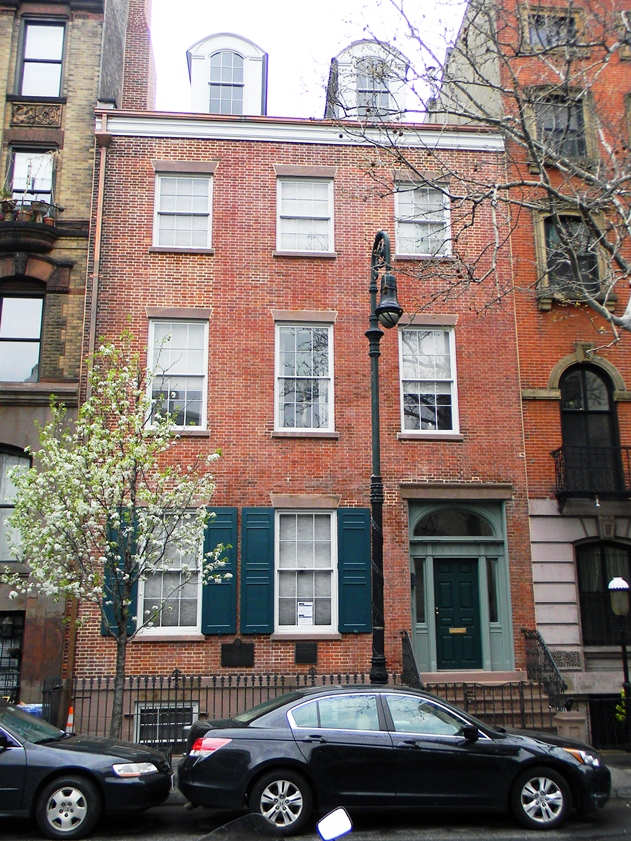 Built 21 years prior, an obvious contender for the title is No. 21 Stuyvesant Street, aka the Stuyvesant Fish House. It is one of those rare gems that is rich in both architectural integrity and historical associations.  Its exterior looks almost exactly as it did when it was built in 1803 by Petrus Stuyvesant, great-grandson of Peter Stuyvesant, the last Dutch Director-General of New Netherland. Petrus built the house for his daughter Elizabeth when she married Nicholas Fish, a close friend of both Alexandar Hamilton and General Lafayette. Fish’s son Hamilton would later become Governor of New York, a US Senator, and Secretary of State.

Like the Isaacs-Hendricks House, the Stuyvesant Fish House was once surrounded by open land. The house sat inside a garden, which remained untouched until after Elizabeth’s death in 1854. In 1861, the rows of Anglo-Italianate homes that make up much of the St. Mark’s Historic District were finally developed.

1803 is indeed very early, but not early enough for the house to called the oldest in the Village.

So where IS the oldest building? 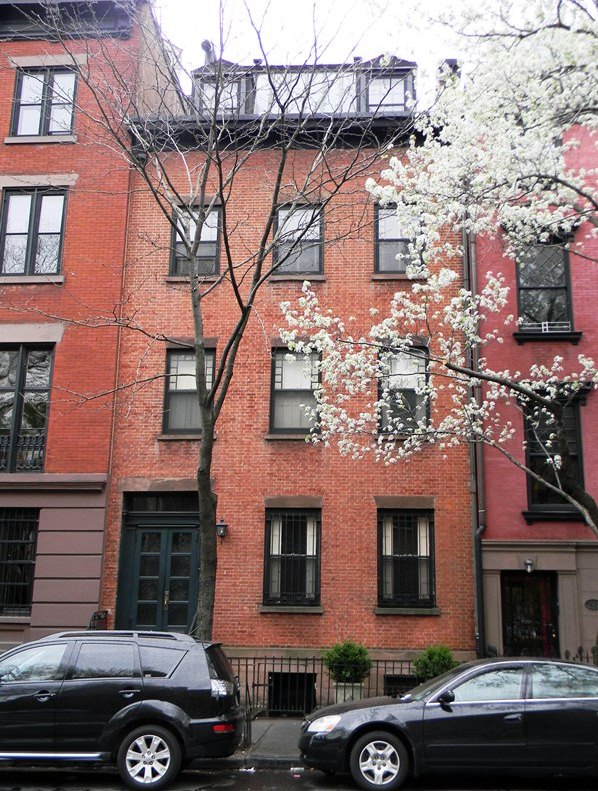 Funnily enough, it order to answer that, one needn’t look further than just across the street from our last stop, or peek through the back window of our offices at the Neighborhood Preservation Center. At No. 44 Stuyvesant stands a Federal-style house built for Nicholas William Stuyvesant in 1795, making it seven years older than the Hamiliton Fish House and four years older than the Isaacs-Hendricks House in Greenwich Village. The house is crawling with stylistic signs of its age, including splayed lintels, Flemish Bond brickwork, and doorway proportions that are typical of that era. It was built in the same year that Nicholas, son of Petrus Stuyvesant and Elizabeth Fish’s brother, married Catherine Livingston Reade. In 1969, the house was designated a landmark as part of the St. Mark’s Historic District.

The designation reports states that, except for the Jumel Mansion and the Dyckman farmhouse, this is the only building from the 18th century “which has been solely used for residential use, successfully retaining for over 175 years its original plan (which is two rooms off the hall) and its many architectural elements” (that was at least until 1969, when the report was written).

Visible from our office windows, through the courtyard of St. Mark’s Church-in-the-Bowery, 44 Stuyvesant Street stands everyday as a proud reminder to us of the importance of our mission.

We would love to hear from you! If you think you know of a house in the Village that dates from before 1795, or if there is a house whose history you have always been curious about, leave us a comment! We’ll let you know what we can dig up about its history.

2 responses to “The Oldest Building in the Village?”