Nearly all of the East Village falls in line with the Manhattan street grid, dating back to the Commissioners’ Plan of 1811. However, one defiant street, only one block long, stands at odds with the grid, Stuyvesant Street. Running true East – West, it was named for Petrus Stuyvesant (1727-1805), the great-grandson of Petrus Stuyvesant (also known as Peter, d. 1672 and the last Dutch West India Company director-general of New Amsterdam) and the street originally ran through Petrus’ vast farmland beginning at present-day Fourth Avenue. Stuyvesant Street then stretched to the Petersfield house, which was located roughly around today’s First Avenue and East 16th Street, with views of the East River. In spite of the fact that the only section of Stuyvesant Street that remains intact today is between Third and Second Avenue (between 9th and 10th Streets), vestiges of the remainder of the street east of there, at odds with the grid, may still be seen today in some very surprising ways.

In 1788, Petrus Stuyvesant, laid out a grid of streets oriented to Stuyvesant Street across his family’s farm in anticipation of the expansion of the city from the south. The city plan prior to the Commissioners Plan of 1811, the Mangin-Goerck Plan of 1803, incorporated the grid laid out by Petrus. However, as the 1811 plan was adopted by the City and as the City expanded, the earlier grid was superseded, with the exception of Stuyvesant Street, which remained intact, at least initially.

All of the street east of 10th Street and west of 3rd Avenue was eventually subsumed into the larger grid.  But you can still see parts of the old Stuyvesant Street’s path, now long gone, especially from above. 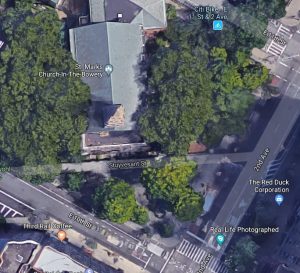 The first example is obvious at street level: St. Mark’s on the Bowery Church, the cornerstone of which was first laid in 1795. Interestingly, Google Maps refers to the path fronting the church as Stuyvesant Street.  But since the 1920s the park now known as Abe Lebewohl Triangle in front of the church has occupied that portion of Stuyvesant Street and the leftover space to the corner of Second Avenue and East 10th Street. 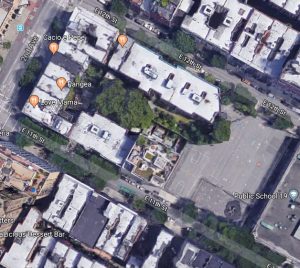 Perhaps most surprisingly, we see evidence of the former thoroughfare in the layout of the playground for P.S. 19 and the adjacent apartment building at 301-309 East 11th Street/304-310 East 12th Street. The street was filled in for the old St. Mark’s cemetery, which had a diagonal boundary which reflected the path of Stuyvesant Street (people were buried there until 1851, and in 1864 all remains of the cemetery were moved the Evergreens Cemetery in Brooklyn). The outline of the apartment building which replaced it, along with the adjacent playground, still follow the diagonal path of the old Stuyvesant Street, which becomes aparent when viewed from above. 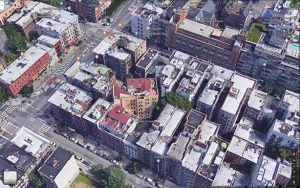 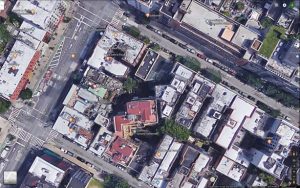 East of 1st Avenue, things get a little wackier.  The two images above show the block bound by First Avenue and Avenue A, 12th and 13th Streets. At 407 East 12th Street, the lot at the rear still aligns with the angle of Stuyvesant Street which it once abutted. Consequently you can see the rear building, built at this seemingly bizzare angle, creating this very strangely-shaped building on the interior of the block.

This building, and the connected interior building were originally erected as a one-story store in 1945, and raised to two stories in 1947 for showroom space. During an alteration in 2003 it along with the adjoining rear building was raised to the current five-plus story height and converted to a residential building.

All of this just goes to show, you can find history in the oddest places.

One response to “The Lasting Imprint of Stuyvesant Street”