Today is a rare day on Off the Grid as we are able to combine two of our ongoing series: Many Layers of History and Beyond the Village and Back.

Unlike some of our other ‘Many Layers of History’ dates, August 31st or 8/31 does not correspond with any Village intersection.  But it does correspond with a long-lost landmark that is near and dear to our hearts, and the history of historic preservation.  8th Avenue and 31st Street was the location of the original Penn Station.  While the current Penn Station, located below Madison Square Garden, is considered by commuters, visitors, and New Yorkers alike to be a blight upon the city, the old Penn Station was seen as one of the city’s most beautiful monuments, and its loss among the most tragic to the beauty and character of the city.  The loss of Penn Station was considered a watershed moment for preservationists and all New Yorkers.

So in honor of today’s date, we have rounded up our past posts that discuss the station and its impact on NYC Preservation, as well as some images from our historic image archive, and then we bring it all back to the Village:

GVSHP Panel Discussion: Preservation After the 1963 Demolition of Penn Station 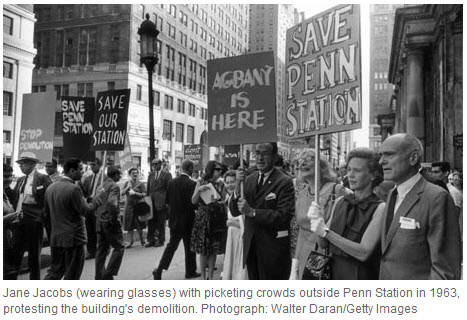 In addition to writing about the lost station, the GVSHP Image Archive has many pictures from the demolition of the old Penn Station in our Carole Teller’s Changing New York collections.  Check out some of these images below:

So how do we bring Penn Station back to the Village?  Well as we know, it galvanized a generation of thinkers and actors to recognize the value of our built environment and our history and helped establish the NYC Landmarks Preservation Commission (LPC).  Jane Jacobs, Greenwich Village’s patron saint of preservation, helped lead some of the demonstrations to save Penn Station.  The loss of Penn Station helped lead to the establishment of the LPC was important, resulting in the designation of the Greenwich Village Historic District and three other small historic districts in the neighborhood in the 1960s, helping to save the neighborhood from further destruction.  So the Village and its preservation owe much to Penn Station.