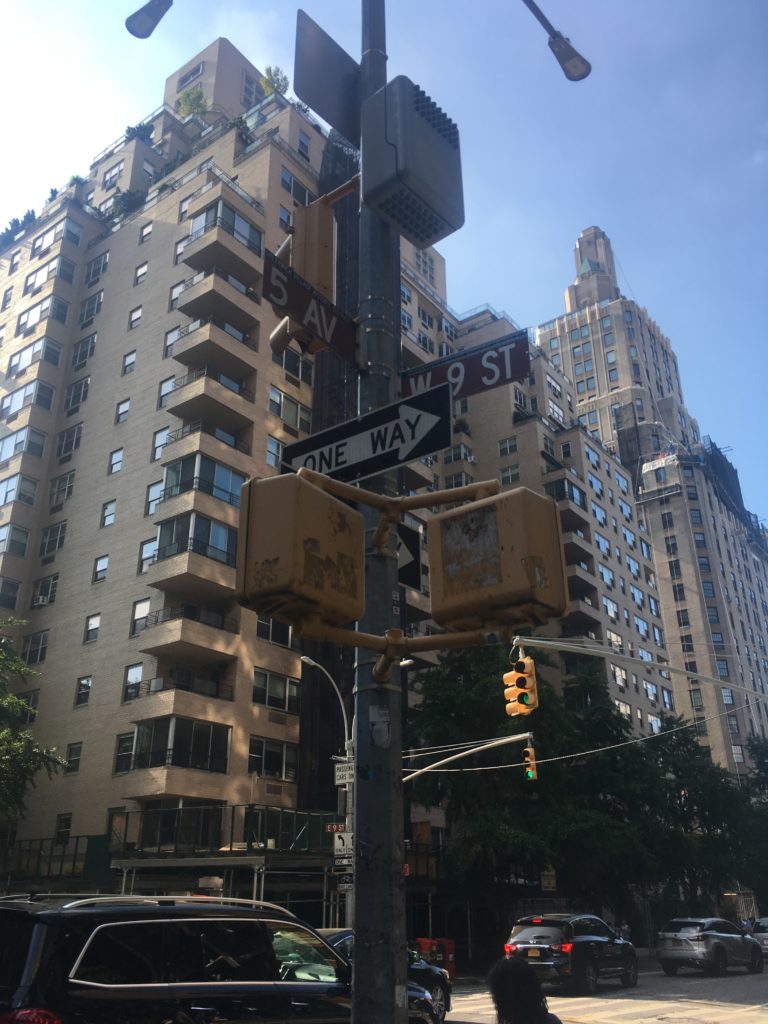 This post is part of a series about Village intersections that correspond to the date.

September is here and a new month means a new corresponding Village intersection!  Ninth Street and Fifth Avenue is now the site of several large apartment buildings, but did you know it was once the location of the famous Brevoort Mansion, as well as a one-time home of Mark Twain? In honor of today’s date, we are taking a look at these two gone-but-not-forgotten buildings.

Completed in 1834, the Brevoort Mansion was an imposing Greek Revival home surrounded by gardens and commissioned by Henry Brevoort from two leading architects of the style, Ithiel Town and Alexander Jackson Davis.  The mansion broke ground with several architectural innovations—a sectioned Greek key pediment and a “paneled” front façade accomplished by slightly recessing the two outer bays. It was designed as much for entertaining as for living; there was a billiard room, a library and two large parlors separated by the entrance hall.  In fact, the Brevoorts set the tone for New York parties when, in 1840, they planned the first grand entertainment New York society had seen.  Invitations went out in February 1840 for a bal costume, so popular in European society.  It would set the pace for social events of high society for the rest of the century.

Henry Brevoort died in 1848 and two years later his widow Laura sold the house to Henry De Rham for $57,000 (over $1 million today).  It remained in the hands of the De Rham family until 1919, when it was sold to George F. Baker, Jr. and his wife, who toyed with the idea of restoring the old mansion for their personal use.  However, by 1920 the Bakers leased the house to the Red Cross for $1 a month and by 1925 the house was slated to be destroyed to make way for the apartment house at 24 Fifth Avenue, originally built as the Fifth Avenue hotel, that still stands at the intersection today.

At 21 Fifth Avenue at the southeast corner of 9th Street stood a stunning brick townhouse and a one-time residence of Mark Twain.  Referred to in the Greenwich Village Historic District designation report as “one of the most architecturally notable houses in all New York,” the Romanesque Revival style home was likely designed by the noted architect James Renwick, Jr. for his parents, James and Margaret Ann (née Brevoort) Renwick. Renwick, Jr. was also the architect of Grace Church at Broadway and 10th Street in 1843.  In designing his family’s home, Renwick, Jr. employed graceful round arches at the window lintels and colonette door surround. Brick corbelling at the window sills and cornice as well as ironwork at the parlor floor balcony added extra dimension to the façade. The side street elevation was equally as detailed with its peaked gable and numerous windows of varying sizes.  In 1906, the noted author Mark Twain lived here when he began dictating his autobiography to his collaborator, Albert Bigelow Paine.

Despite the beauty of its architecture and its link to famous figures, 21 Fifth Avenue – along with its four townhouse neighbors and the famous Hotel Brevoort to the south – was razed in the early 1950s to make way for the fourteen-story apartment building at 11 Fifth Avenue, known as the Brevoort. Paired with the Brevoort East, the apartment complex occupies the full city block bounded by Fifth Avenue, East 8th Street, University Place, and East 9th Street.  More images of the exterior and interior of the Mark Twain house can be found in our Historic Image Archive.