Your input is needed! Today we feature our latest Business of the Month — help us to select the next. Tell us which independent store you love in Greenwich Village, the East Village, or NoHo: click here to nominate your favorite. Want to help support small businesses? Share this post with friends.

You’ve got to like someone who opens up a shop in the same neighborhood they grew up in. And if you are so good at it that you get support from the New York Knicks and create custom flavors for professional athletes who seek out your down-to-earth yet artisanal and creatively-flavored ice cream, you may even possess some magic. The owner and namesake of Mikey’s Likes it Ice Cream at 199 Avenue A (12th/13th Streets) is that local entrepreneur, and his establishment is our  August Business of the Month. 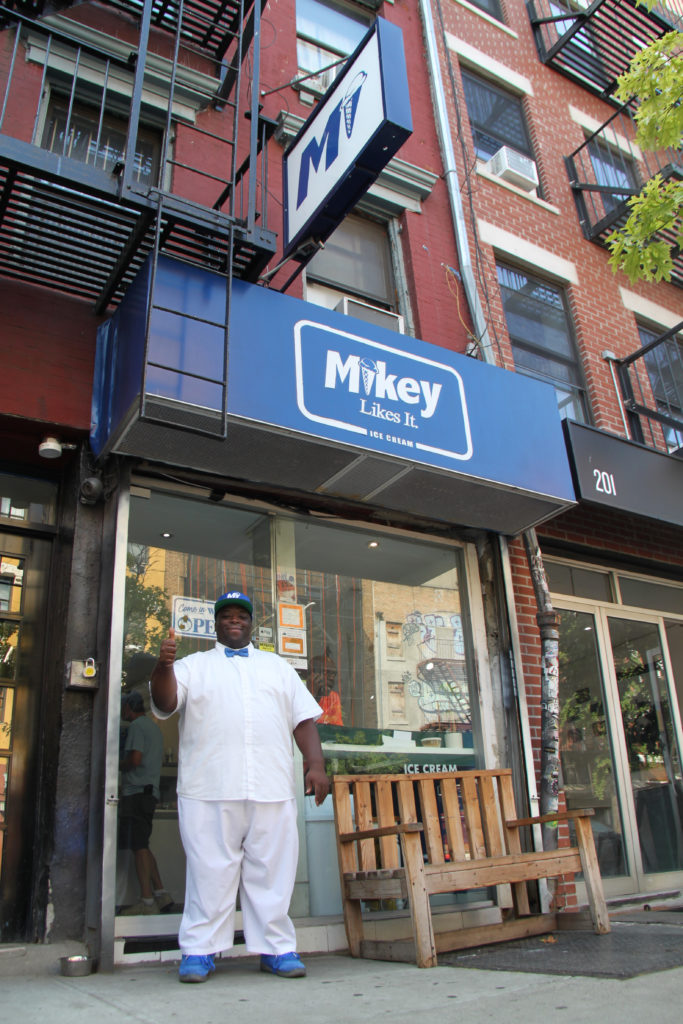 Michael “Mikey” Cole is the founder and owner of Mikey Likes It Ice Cream, the pop-cultured inspired ice cream shop located in the East Village since 2013. A downtown local, Mikey’s love for making food only parallels his love for people. “We’re just trying to push the boundaries of what companies are doing with ice cream,” he says. “And we do this by using the best ingredients and building lasting relationships with local businesses, customers and other great people.”

A master at flavor and texture, Mikey has created custom ice cream flavors for notables like Hillary Clinton and Jay-Z, and garnered national coverage from leading publications including The New York Times, O, Essence, and New York Magazine.  He’s also been featured on The Food Network’s The Kitchen, and is a regular on CBS’s hit show That Other Pregame Show.

Mikey grew up on 14th Street and Avenue A, went to P.S. 19 and attended the Boy’s Club on East 10th Street.  His parents are from Sierra Leone, “the land of the blood diamonds” according to Mikey.  His father walked five miles to get water and instilled in him the mentality that “if you fail, try again.” What he likes about the neighborhood and what most influenced him was how it is was and still is a melting pot of culture with all kinds of ethnicities represented – that is what makes the neighborhood so unique. “As kids, things might have been hard, so you learned to share, you have rice and they have beans and together you have a meal.”  Our interview took place next door at the slightly more spacious Baker’s Pizza, another friendly small business in the neighborhood where we were welcomed with offers of pizza or something to drink.  Samples of ice cream lived up to the hype. “It is not the likes on Instagram that make an influencer, the real influencers are the ones around you showing love,” Mikey shared, offering his take on social media culture. 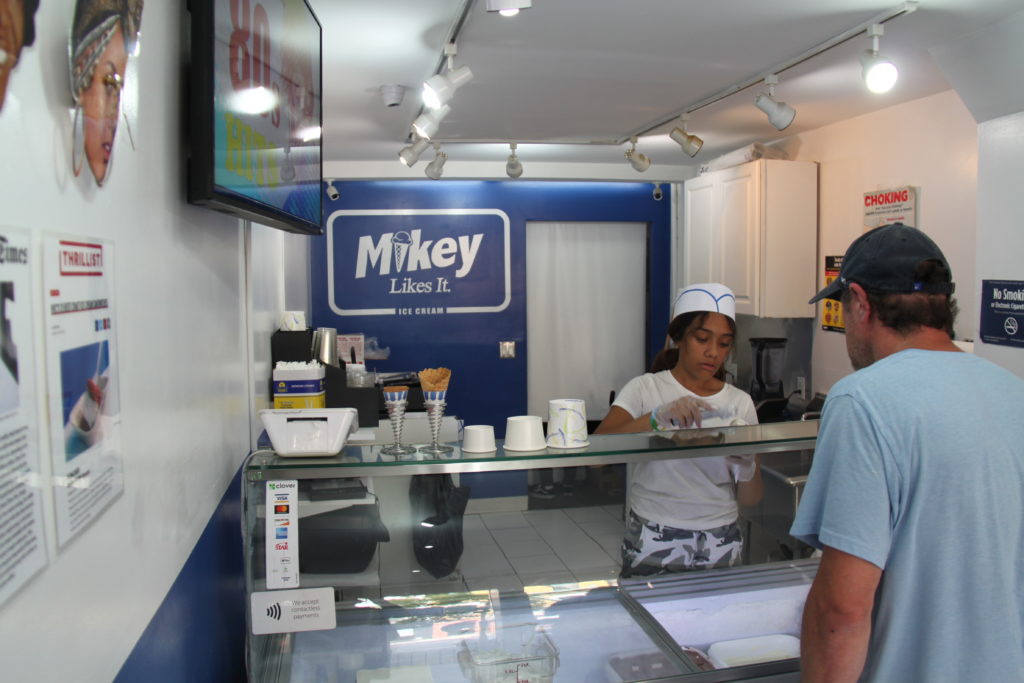 With two parents working different and multiple shifts, Mikey was often looked after by his Aunt. After school, he would attend her cooking class with her, which helped her develop her own ice cream making skills.   When his beloved Aunt passed away and his mother was sick, Mikey wondered what to do in life. Sorting through her possessions he found a recipe of his Aunt’s for vanilla ice cream, and he went to get the ingredients to make it. Since then, making ice cream and making people happy is a calling.

Making ice cream is a creative and meditative practice during which he says he says he gets to talk to his aunt, and that the wisdom she shared some years ago he finally understands. He said he gets in a zone like Swayze and Whoopi, referencing a scene from the 1990 movie Ghost in which Whoopi’s character gets possessed by the deceased Swwayze, for one last dance on earth. 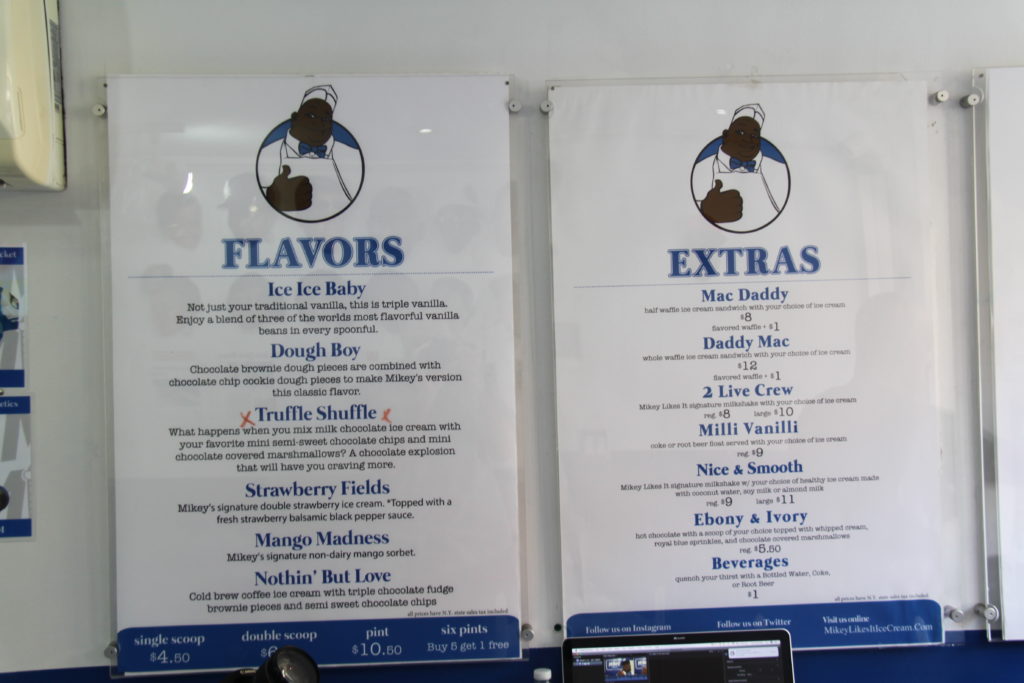 Mikey experiments with flavors and textures and tastes. One time he ate so much chocolate he was sick, but he wanted to become versed with all the nuances and flavors that a chocolate lover might appreciate.  Much of his work is not planned but is guided by inspiration.  Benny the Butcher, a Buffalo-based musician and rap artist, collaborated with Mikey to create a signature ice cream flavor for him.  Mikey explained how he arrived at the unique flavor.  He reflected how that smaller upstate city does not get the “props” or respect that New York does.  Mikey listened to Benny’s music while concocting and brainstorming.  And the Butcher’s lyrics had some hint of the dynamic between these two cities and how life isn’t always sp easy-going or fair. Since if Benny the Butcher’s flavor could be the “Big Apple,” perhaps it could be the “Sour Apple”. So he crafted a sour green apple ice cream with green apple gummy bears from Economy Candy, on Rivington Street.

#MikeyLikesItIceCream & @BennyBsf present #TheButcher 🔪 a Sour green apple ice cream with green apple gummy bears & a red apple swirl. *each scoop is topped with a fondant butcher cleaver. Benny will be in East Village flagship shop to chop it up with everyone who comes through pic.twitter.com/WwOrgzc978

East Village and Lower East Side locals all seem to know Mikey and love his cozily-sized Avenue A storefront, with a bench out front, a hallmark of many a fine local joint. Mikey is seemingly on a first name basis with more than half the people strolling by, whether they’re alone or with their kids.   The shop hosts after-school happy hours for local youth and there are times that if you bring in an “A” on your report card you can get a free scoop.  And he hires and trains young adults to work the shop with great customer service. He wants to leave another legacy of ice cream makers and instill the message “If I can do it, so can you.”

Mikey observed that most schools today do not really teach entrepreneurial skills and encourage young adults to envision working for themselves and owning their own company. Mikey himself benefitted from a post-Rikers Island entrepreneurship training, and has since channeled his energy, charisma and skills to help himself, the neighborhood, and beyond.  Mikey is adamant about mutual support amongst local businesses and often buys his strawberries or mangos from a local fruit vendor.  Every month a fresh new mural is up on his gate by Andre Trenier, and the Flavor of the Month namesake clocks that adorn the blue and white shop are made by local artist ClockWork Cros.

Since opening his Avenue A shop Mikey has since expanded with one in Harlem and has a project in Times Square in the works.  He has a Mikey Likes It Ice Cream truck that works corners and events, from the Mermaid Parade in Coney Island to the annual East Harlem Art Of Healing End Gun Violence Arts Festival.  He has been commissioned to add value at street activations for grand openings or product releases and says of that popular part of his business “Ice Cream is a tool of positive reinforcement.”  He recently catered dessert and scooped out ice cream for a wedding at the American Museum of Natural History.  And he still has his first ice cream cart that helped get it all started parked out front as a humble reminder. 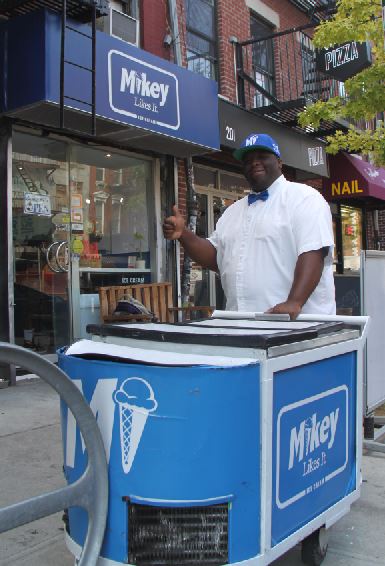 To what does he attribute his success” “The community!” Mikey says without hesitation.  With his growing success, Mikey is all gratitude and positive vibes, “I’m Dorothy on the yellow brick road” he says. Lots of food places close in a year or two Mikey observed, and if you make it to five years, as he has, you’re doing something right. “If you make it to ten years you make it to landmark situation.”  While not yet an official landmark, Mikey Likes It Ice Cream is a popular beacon on Avenue A, a leader of the new scoop that brings the flavor not just in the summer, but year round.  Visit them today. 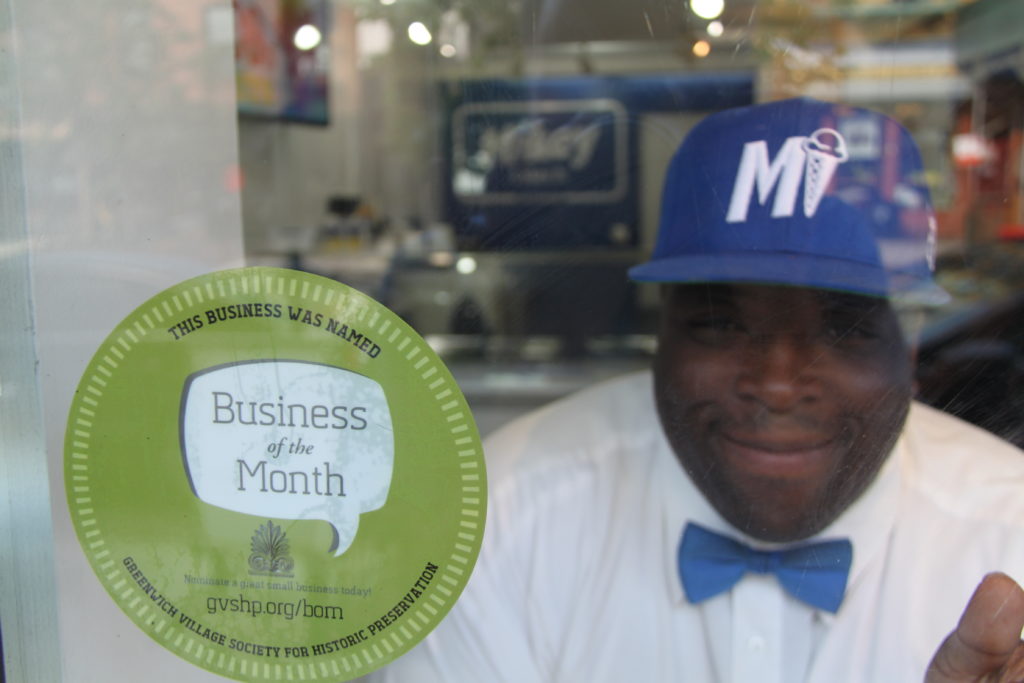 2 responses to “Business of the Month: Mikey Likes It Ice Cream, 199 Avenue A”