Walking through the neighborhood now often referred to as NoLIta (north of Little Italy), one can’t help but be struck by a four-story building on Mott Street which seems much more impressive than its modest height would imply. The stepped roof and carved foliate detail above and below the windows give the impression of a grand private residence, or at least the headquarters of some noble institution. But as most New Yorkers know, this is an old immigrant quarter, and the carving above the entrance which says “Fourteenth Ward Industrial School” gives away the building’s much less ostentatious origins. Nevertheless, this is one of the great landmarks of New York City, and one which bears a much greater connection to neighboring Greenwich Village and the East Village than the few blocks separating them would suggest. 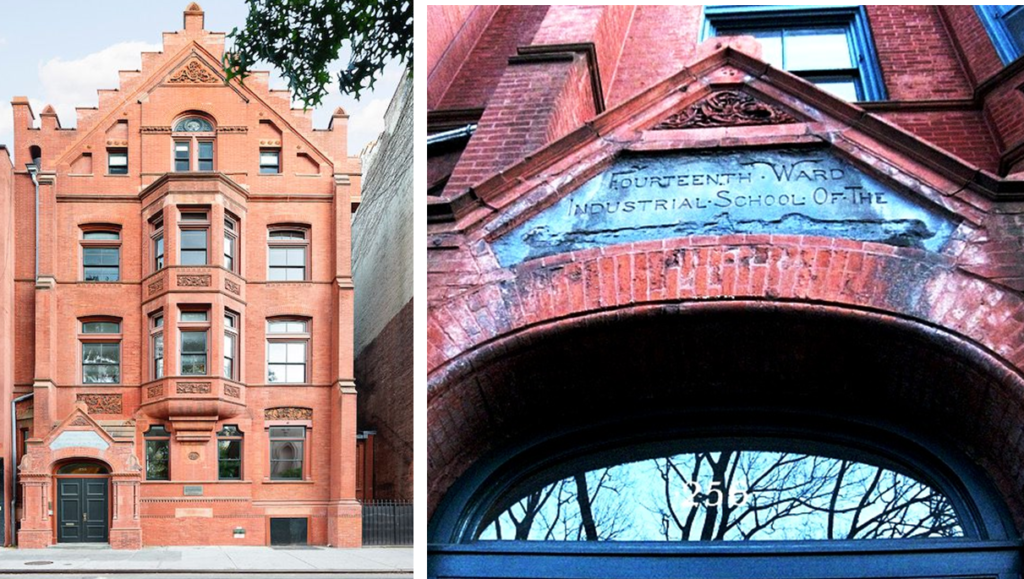 The Fourteenth Ward Industrial School, also called the Astor Memorial School, was designed by the architectural firm Vaux & Radford in the Victorian Gothic style. Minister Charles Loring Brace, the founder of the Children’s Aid Society (CAS), enlisted his friend, architect Calvert Vaux (December 20, 1824 – November 19, 1895), to undertake the design of this and many other CAS buildings between 1879 and 1892. Vaux, who was born in England and best-known as the co-designer of Central Park along with Frederick Law Olmstead, felt motivated at this point in his career to use his talents to improve the lives of the city’s disenfranchised communities. He sought to develop buildings that stood apart from the city’s tenements, which at the time defined poor and immigrant life in the area with their generally grim living conditions. Vaux entered a formal partnership with engineer George Kent Radford from 1876 until 1893, and together the firm Vaux & Radford developed buildings for the CAS that were intended to conjure up the feeling and image of a “snug country inn.” Their buildings were often free-standing and displayed varied rooflines and ornamental features that recalled Dutch architecture.

According to its landmark designation report (the building was designated as a New York City Individual Landmark on July 12, 1977), 256-258 Mott Street was constructed to replace a CAS school on Crosby Street. This prior school, developed in 1853, had primarily served the Italian community of the surrounding neighborhood. The new Fourteenth Ward Industrial School was donated by John Jacob Astor as a memorial to his wife Charlotte, who had died of cancer in 1887 and who had been extensively involved in the Society. Astor paid $21,000 for the lot, and the building was dedicated in March of 1889.

The four-story building was constructed with selected common and pressed Philadelphia brick, laid with red mortar, and trimmed with Gatelaw Bridge stone.  The gable of the front entrance on the ground floor was designed with a terra-cotta panel showcasing the initials of the Children’s Aid Society set in foliate ornament above a carved inscription with the name of the school. Over the entrance, Vaux incorporated a terra cotta plaque with the letter “A” commemorating the contribution of the Astor family. Another “A” was positioned inside a carved roundel placed below the corbel of the oriel.

Inside, while the building operated as a school, the basement held a kitchen and separate dining rooms for the teachers and students. The first floor included classrooms for the kindergarten and primary school, and the second and third floors housed classrooms for the older children. The top floor was reserved for primary and industrial school classrooms, and a playground was located at the back of the lot behind the building.

The Fourteenth Ward Industrial School served as an industrial and night school until 1913, at which point a larger structure was built on the corner of Elizabeth and Hester Streets. Afterward, the New York Association for the Improvement of the Conditions of the Poor leased and then purchased the building, and it became the Mulberry Community Center, providing dietary and dental clinics, English language classes, and assembly areas for local residents. Later, the building was converted to industrial use, and sold in 1972 to the Fourteenth Ward Industrial Building, Inc., which turned it into cooperative apartments.

The former Fourteenth Ward Industrial School on Mott Street, and the Children’s Aid Society as a whole, owe much of their existence to Greenwich Village and the East Village. For starters, the organization was inspired by the Carmine Street Church, once located on the north side of Carmine Street, just east of its intersection with Varick Street. In 1848, under the leadership of Reverend A.D.F. Randolph, the church began to provide education and shelter to the large numbers of Irish and German immigrant and African American children who were not attending schools or who did not have a home. Many of these children came from families who had arrived in New York City in the 1830s and 1840s following the economic downturn caused by Irish industrialization and agricultural collapse, the unemployment and religious and political oppression resulting from the failed 1848 revolutions in Germany, and the abolition of slavery in the northern states. As homes in the East Village were converted to boardinghouses or replaced with tenement buildings to accommodate the rising population, economic mobility stalled, the city became more crowded, and rates of crime and illness increased. Without compulsory education or protective legislation, many children were left with little support beyond the overextended resources of existing almshouses, orphan asylums, and religious and philanthropic organizations.

In an attempt to provide institutional support to these children, the Carmine Street Church began regularly hosting religious services for what came to be an average of one thousand individuals. They called the events, which were soon emulated by a handful of institutions, “Boys’ Meetings.” The following year, when the Chief of Police Captain Matsell released his annual report, stating that there were 10,000 children living on the streets, Protestant minister Charles Loring Brace (June 19, 1826 – August 11, 1890), a member of the Carmine Street/West Presbyterian Church, began meeting with two other clergymen to strategize additional and innovative ways they could work to combat this horrific reality. Brace led the group of three, which included Reverend William C. Russell and Reverend Benjamin Howland, in what they called “The Mission.” The men then officially chartered the Children’s Aid Society (CAS) in February of 1853.

The first institution of its kind, the Children’s Aid Society instigated the development of social services across the country.  From its beginnings, the Children’s Aid Society developed a program it termed “Emigration” or “Placing-Out Department.” The CAS hoped to match the city’s disenfranchised children with rural families who needed extra laborers. The organization also, however, constructed a number of buildings in the city as lodging houses and schools, many of which were developed in the East Village and remain here today. The Tompkins Square Lodging House for Boys and Industrial School at 295-297 East 8th Street and Avenue B facing Tompkins Square, constructed in 1886, is the oldest extant Children’s Aid Society building, the third building Vaux & Radford designed for the organization, and the only extant building that was both a lodging house and an industrial school. It was designated an individual landmark in 2000.

The Sullivan Street Industrial School at 219 Sullivan Street was another school built by Vaux & Radford for the CAS in 1891-92. It was designated as part of the South Village Historic District in 2013.

The Sixth Street Industrial School at 630-634 East 6th Street was built in 1889 by Vaux & Radford. Though unlike the aforementioned buildings it is not landmarked, it is one of the most striking and remarkably intact Children’s Aid Society buildings that remain today.

Taken together, these buildings recall the long history and pioneering impact of the Children’s Aid Society, which profoundly affected our neighborhoods and city, as well as the trajectory of the provision of social services as a whole.

4 responses to “Beyond the Village and Back: The Children’s Aid Society’s Fourteenth Ward Industrial School on Mott Street”