The theater at 1 Sheridan Square has a long history as a vibrant, varied West Village performance space. Housed in a building constructed in 1834 by Samuel Whitmore, the space has had a fascinating life throughout the years in its many iterations as a dining place, a club, and a theater.

One of the earliest commercial uses of the ground floor space was as a theme restaurant, a “Goofy Club,” where diners ate in a dungeon! In 1938, entrepreneur Barney Josephson opened a supper club in the space which he called Cafe Society. He invited neighborhood artists to paint murals on the walls in exchange for a $250 bar tab. 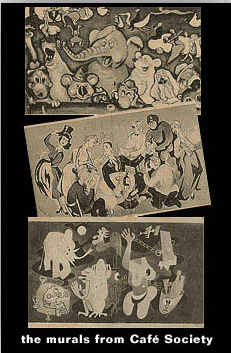 He also employed John Hammond, a prominent jazz producer, to advise him on booking talent. Opening night featured a relatively unknown singer by the name of Billie Holiday. Recalling this night later in life, Holiday said, ” I opened Cafe Society as an unknown, I left two years later a star.”  The forward thinking Hammond and Josephson were to alter the course of cultural history with their at-the-time radical approach to hiring entertainers.

Over the years, Josephson’s vision and concept for his club became more revolutionary. Refusing to comply with the racial segregation laws that prevailed across the country, he invited both mixed race audiences and performers to Cafe Society. Nicknamed “The Wrong Place for the Right People,” the club became a cultural phenomenon where jazz legends like Lena Horne, Sarah Vaughn, Art Tatum, and Big Joe Turner performed.

The club flourished until 1950 when Josephson closed it in order to open a restaurant called The Cookery. The restaurant did not take off and the space soon after became “One Sheridan Square Theatre.”

In the 1960’s it briefly became “The Haven,” a gay nightclub that was raided illegally and destroyed during a police action. 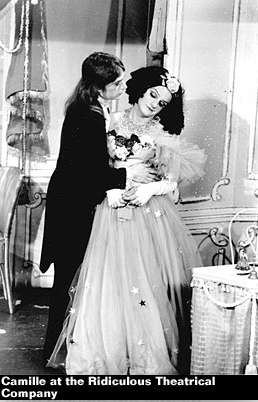 A significant chapter in the Village’s extensive theater history belongs to The Ridiculous Theatrical Company, which was the first permanently based theater that used the space.   Founded in 1967 by dramatist, actor, and agent provocateur Charles Ludlam, the Ridiculous Theatrical Company (RTC) was part of the Theater of the Ridiculous.  This was an American movement that started in 1965 with its beginnings in John Vaccaro and Ronald Tavel’s “The Play-House of the Ridiculous.”  Ludlam performed and wrote for The Play-House, but following a dispute with Vaccaro, broke with the group and founded RTC.  Over the next twenty years, Ludlam and RTC led the countercultural theater scene in the West Village and would change theater in America for the next generation. His classics Camille, The Mystery of Irma Vep, and the Artificial Jungle, with all with men playing the female leads, were an artistic force in the theater. Ludlam died in 1987 and the neighborhood turned the doors of his theater into a memorial with flowers, candles and thanks for his massive contribution to American Theater. Ludlam’s partner, Everett Quinton, continued The Ridiculous Theatrical Company in the space and successfully had the facing street renamed Charles Ludlam Lane.

When AXIS acquired the space in 1998, the interior was transformed to reflect the artistic vision of Artistic Director Randy Sharp.

His vision is that of total theatrical immersion where audiences are surrounded by the experience of the play the moment they cross the threshold. AXIS has produced an eclectic series of both original and published plays (including Buchner’s Woyzeck, Beckett’s Play, and Benjamin Baker’s 1848 sensation A Glance at New York) with highly advanced, state-of-the-art technological components that amplify the internal meaning of the material. Their episodic play HOSPITAL, about the interior life of a man in a coma, is a recurring West Village production every summer.

The company has embarked upon a new endeavor this spring: a new stage version of Henry James’ novel, Washington Square. The story centers on Catherine Sloper, a wealthy young woman raised in a house of grief by a bitter father. Surrounded by a society and family who perceive her as plain and soft-spoken, Catherine remains steadfastly committed to her forward-thinking optimism. When Morris Townsend, a mysterious suitor, makes a bid for her heart, Catherine is torn between following her instincts or heeding the warnings of her cruel father and persistent aunt.

While the novel is set in a fashionable New York home during the late 19th century, Randy Sharp’s radical interpretation strips away all of the excess of the time period to deeply focus on Catherine’s journey into becoming her own person. This sparse design heightens the psychological underpinnings of the story, building tension as the play hurtles towards its inevitable conclusion.

Given the current climate of caution, the theater has, following the lead of city, state, and federal elected officials as well as the recommendations of the Department of Health and the Centers for Disease Control (CDC), suspended performances of Washington Square  for 30 days.

We at Village Preservation are thinking of all of our constituents, small businesses, and cultural institutions these days and look forward to the near future when we will once again feel good about attending the theater and enjoying our lives in the Village that we so cherish.