Whenever a building is demolished, something is lost, even if the planned replacement is a worthy one. In the case of 268-272 East 2nd Street, currently a nondescript four-story building, one might never guess the outstanding century-and-a-half history of the property serving those in need in some pretty extraordinary ways from 1867 until today, with a stint as a coal depot to boot!  Although radically altered over its many years (and therefore not the best candidate for landmarking), this building between Avenue C and D has a surprisingly rich history. It is even referenced in Jacob Riis’ 1892 book, The Children of the Poor.  And so before it’s gone (as it seems it soon will be), we thought it important to tell its remarkable story.

Based upon our research, we believe that the existing building, which has been altered and expanded many times, was originally built as Primary School No. 31 in 1867. In 1899 it became Public School No. 131, which it remained until at least 1924. Historic photos show a three-story building with very large second and third story windows. In 1944, the building was being used as a coal depot for the city. A 1947 New York Times article states that in this year the school was converted into 18 units of emergency housing location for veterans. 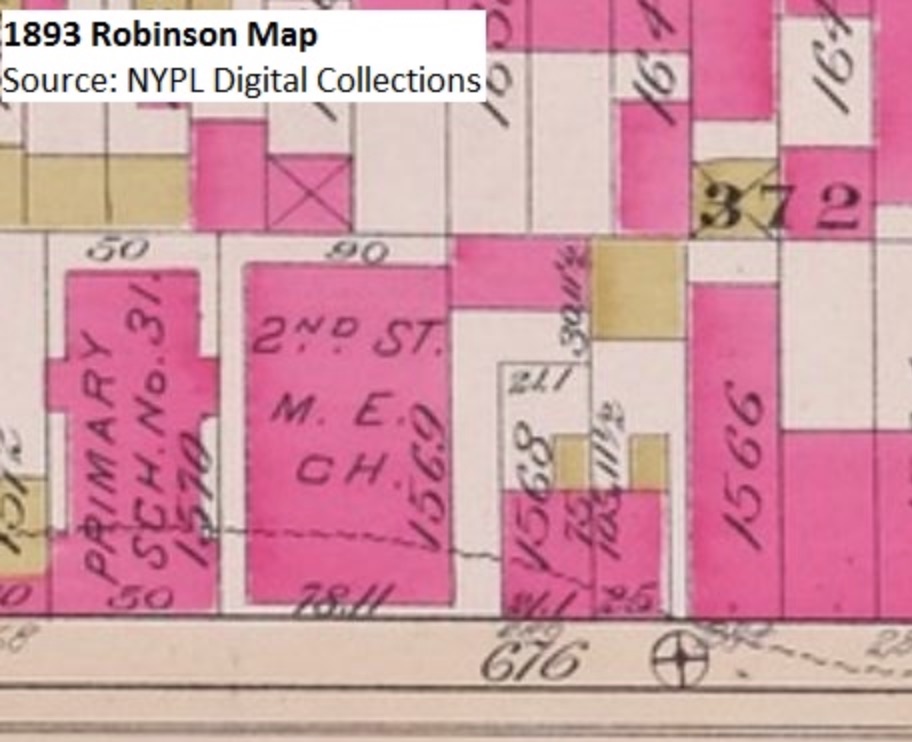 In 1955, the building was functioning as a synagogue. In 1970 it was operating as a daycare center, and in 1973 the building functioned as the offices and school of the Negro Action Group (you can read more about this property and all the buildings in the East Village on our Building Blocks website.) 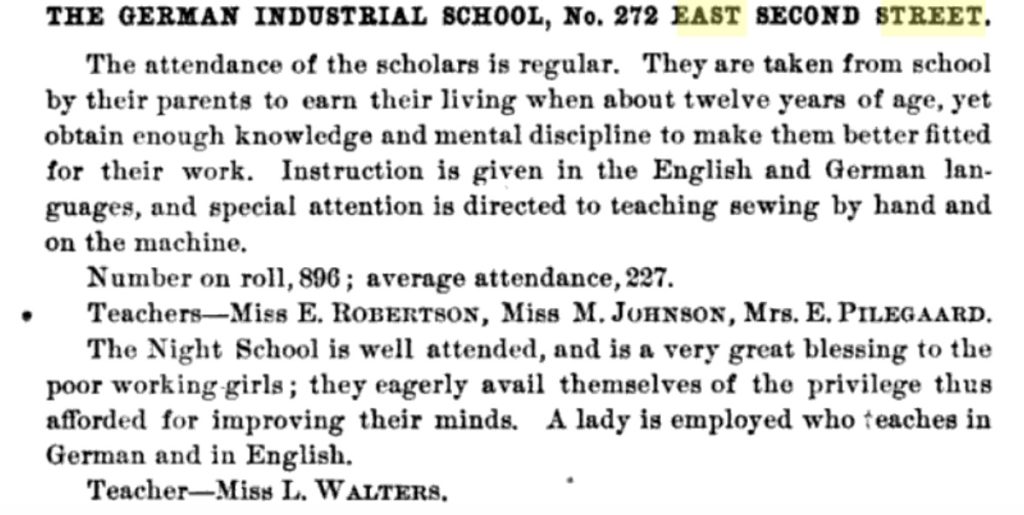 This thumbnail overview leaves out one very important piece of the building’s history we uncovered.  According to the Children’s Aid Society’s 1895 Annual Report, the organization’s German Industrial School was located at 272 East Second Street. This address was, at the time, also the address of Primary School 31. Records over the years have not seemed conclusive, but the present-day 268-272 East 2nd Street seems to be the same building, albeit in altered form, that housed CAS’ German Industrial School in the 1890s.

Most recently, the building was a 48-bed transitional housing facility. Barrier-Free Living works with people with disabilities — both survivors of domestic violence and homeless men, women and children — to thrive in safe, supportive communities.

By comparing the height of the building relative to the building on the neighboring lot, in historic photographs versus present ones, it can be determined that height was added to the structure at some point, as it is now four stories. It appears, though, that much of the shell of the building, minus the height extension, has not changed from 1920.

Even from 1915 to 1920 there were noticeable alterations in the building; you can see that the lintels above the windows were shaved at some point in that five year period.

The slight façade set back on the sides of the building is the same. The ground floor façade and window enframements are also the same as the 1920 photo. The windows have all been changed and the façade most likely has been stuccoed over. The pediment above the cornice has also been removed. The cornice is not identical to the one in the historic picture, but it does mimic many of its details.

What is planed on this site is a new development that will provide both housing and support services for survivors of domestic violence with disabilities. It will replace the existing facility, with housing, administration offices, a private garden, and a top floor terrace. It is expected to yield 74 individual apartments.

The Children’s Aid Society was founded in 1853 by Charles Loring Brace at a time when orphan asylums and almshouses were the only “social services” available to poor and homeless children. Brace was inspired by the Carmine Street/West Presbyterian Church, at the northern side of Carmine Street just east of its intersection with Varick Street, of which he was a member and which held massive religious services for the city’s marginalized youth. The Children’s Aid Society’s progressive ideas transformed social services and social reforms in New York City and impacted the lives of millions of children.

About a dozen of the organization’s buildings were designed by Calvert Vaux, Central Park architect, and friend of Brace, who was interested in how architecture could be used to better the lives of the more unfortunate members of society. He designed his first building for CAS in 1879, the now-demolished East Side Boys’ Lodging House and Industrial School on East Broadway and Gouverneur Street. Extant Vaux-designed Children’s Aid Society buildings include the former Elizabeth House for Girls at 307 East 12th Street, the former Tompkins Square Lodging for Boys at 295 East 8th Street, the former Sullivan Street Industrial School at 219 Sullivan Street, and the former Sixth Street Industrial School at 630-634 East 6th Street.

In addition to providing children with schooling and shelter, the Children’s Aid Society understood New York City’s disenfranchised children, many of whom came from immigrant families, to be an abundance of unskilled laborers who could fill the excess of work needed in rural areas. From the organization’s founding, it sent children across the country to live and/or work with rural farming families – especially Protestant families – in a program it termed “Emigration” or “Placing-Out Department.” Though the CAS supported entire families moving from the city together starting in 1874, the organization was criticized for severing children from their families of origin, for making placements too hastily, and for being anti-immigrant, anti-Catholic, and anti-urban. The present incarnation of the organization is located at 711 Third Avenue.

For more information on the rich, complex history of the Children’s Aid Society and the Civil Rights and Social Justice history of the East Village, Greenwich Village, and NoHo neighborhoods, click here.