Circle in the Square Theater 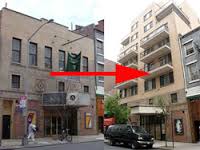 Circle in the Square Theater

Village Preservation fought to prevent the demolition of the historic former Circle in the Square Theater, and to prevent inappropriate development from taking its place. The City refused to consider landmark designation for the site, and allowed a massive addition on top which violated zoning regulations in several respects. We were able to get the City to force the developer to comply with some elements of the zoning code which they violated, but not others. In 2013 the site was included in the South Village Historic (landmark) District we proposed and fought for, but this was long after alterations to the building had been made.

Before and after demolition photos