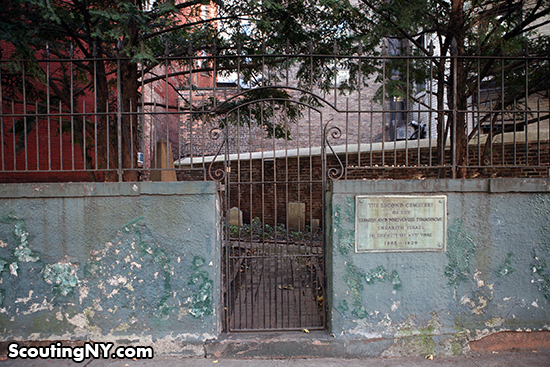 This in-person, outdoor event is currently full — please sign up for our waitlist and we’ll let you know if spots open up, or if this tour will happen again in the future. Thanks!

The first Jewish residents of New York City founded the first synagogue in North America, Shearith Israel, downtown below Wall Street in 1654. The descendants of Spanish and Portuguese Jews who founded Shearith Israel fled the inquisition, then escaped Dutch Brazil for New Amsterdam when the Portuguese took over the colony and enforced the same anti-Jewish laws their forebearers escaped. This small but historic triangle of a cemetery on West 11th Street, established in 1805, is referred to as Shearith Israel’s second cemetery (it’s actually the third; the first was destroyed) and was originally established on a much larger plot that had extended into what is now 11th Street but was cut into by the establishment of the Manhattan grid system. This plot, which contains remains from the two prior cemeteries, operated until 1829 but remains a sacred space in our neighborhood that has suffered much damage over the years. Shearith Israel’s Zachary Edinger will illuminate the history and look forward to a new renovation plan.

Rev. Zachariah Edinger is the Shamash and Assistant Hazzan at Shearith Israel. Mr. Edinger is a graduate of Fordham Law School and Queens College (CUNY).  Prior to becoming Sexton, he was an Administrative Hearing Officer for the NYC Department of Housing Preservation and Development. Zachary grew up in Shearith Israel and is the grandson of the late Judah Guedalia, who was Sexton of our congregation for 40 years. In fact, Zachary is now the fourth member of the Guedalia family to serve Shearith Israel as Sexton.

Accessibility: From the sidewalk, there is one step up into the cemetery, which is made of stone paths that are uneven in places. 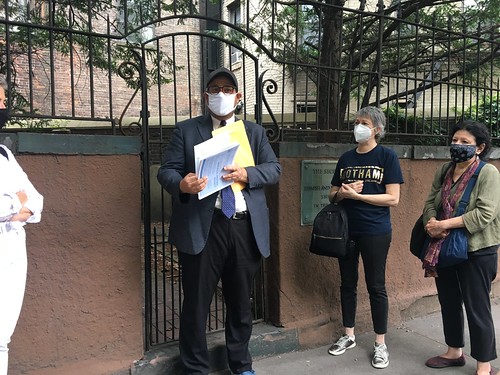