Celebrating the Bicentennial of the African Grove Theater 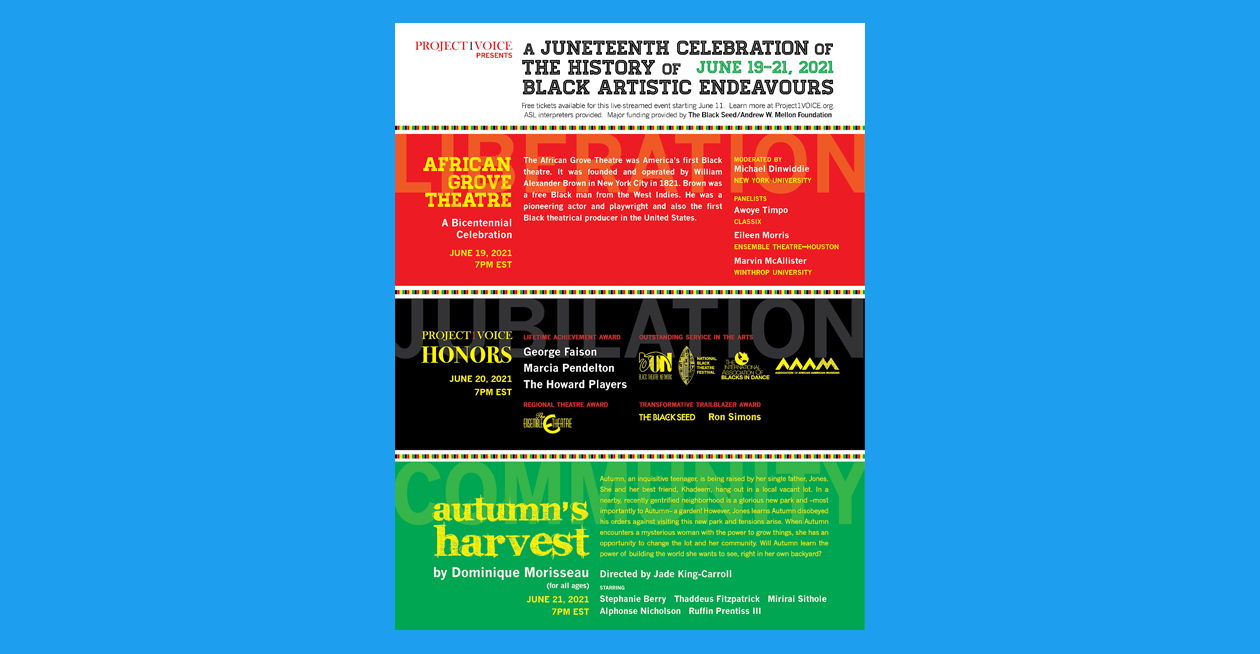 Village Preservation is proud to join with Project 1Voice and dozens of community partners to celebrate the 200th birthday of the African Grove Theater. This celebration also commemorates the 10th anniversary of Project1VOICE, as they host Us Supporting Us, a three-day free, virtual event for Juneteenth.

The celebration will begin on June 19th with Liberation: African Grove Theatre, an in-depth conversation on the 200-year legacy of William Alexander Brown’s African Grove Theatre, located originally on the corner of Bleecker and Mercer Streets. The panel, moderated by NYU Professor/Playwright Michael Dinwiddie, will explore the history of Black creativity from 1821 to today. Panelists will include Awoye Timbo (Director/founder of CLASSIX), Eileen Morris (Artistic Director of The Ensemble Theatre, Houston) and Marvin McAllister, a nationally-recognized author, Professor at Winthrop University, and scholar on the African Grove Theatre and the American Theatre. Black Theatre Network is joining as a partner for this event.

The African Grove Theatre was founded by William Alexander Brown, a free African American and pioneering actor and playwright, in 1821. Through his work as a ship’s steward, Brown had traveled extensively through England and the Caribbean, where he was exposed to different types of theater. On his return to New York City, Brown bought a house at 38 Thompson Street and began the African Theatre Company. While they would often put on Shakespearian plays, the Company would present original works as well. One of them, Brown’s own “The Drama of King Shotaway,” was performed there in 1823, recounting a 1796 uprising of Black Caribbeans against the British Navy Forces on the island of St. Vincent. This play is believed to have been the first full-length play by an African-American performed in the United States.

Brown and his Theater’s legacies live on in theater created by and for those of African descent and in the vibrant world of Black theater. We’ll celebrate this remarkable institution through readings, recreations, and a panel on Saturday, June 19th.

Explore the other events for the weekend:

Monday, June 21st at 7 PM – Community: One Play One Day – Autumn’s Harvest, for all ages — Register here!
Author and playwright Dominique Morisseau will give a virtual staged reading of Autumn’s Harvest with cast members from the original production, which will be directed by Jade King Carroll. This play is for young audiences.

Project1VOICE is an NYC performing arts organization providing support and representation for the Black experience in American theater. Find out about additional programming through their 10th anniversary year, and more, at Project1Voice.org.