First Houses—A Monument Of The Past—A Model For The Future?: A lecture and discussion with Warren Shaw 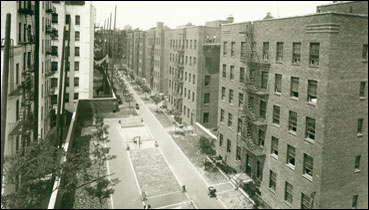 First Houses—A Monument Of The Past—A Model For The Future?: A lecture and discussion with Warren Shaw

The year 2006 marks the 70th anniversary of the very first publicly-sponsored housing for poor people—the landmark First Houses in the East Village which inaugurated the era of Urban Renewal. Since the late 1960s it has been fashionable to deride urban renewal as an aesthetic and sociological failure. But with real estate inflation squeezing more and more Americans, and with such bastions of affordable housing as Stuyvesant Town going “up-market,” it is time to re-appraise the legacy—and the value—of public housing and urban renewal. Warren Shaw, Assistant Corporation Counsel in the Real Estate Litigation Division of the New York City Law Department, will speak about the history of First Houses and its implications for today.