On June 6, 2018 Village Preservation held its 38th Annual Meeting and 28th Annual Village Awards in the landmarked Auditorium of The New School. We were honored to be joined by several hundred friends and supporters including host Penny Arcade.
Screen reader support enabled.

On June 6, 2018 Village Preservation held its 38th Annual Meeting and 28th Annual Village Awards in the landmarked Auditorium of The New School. We were honored to be joined by several hundred friends and supporters including host Penny Arcade.

Want to see more of the 2018 Village Awards? Enjoy a video and full set of photos below. You can also read Executive Director Andrew Berman’s annual report, and view his accompanying slideshow. 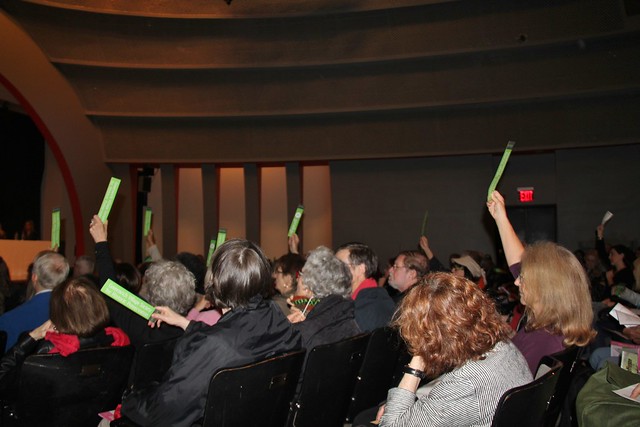 An international center dedicated to the preservation, study, and exhibition of film and video, with a particular focus on independent, experimental, and avant-garde cinema. Their goal is to protect and preserve film and video that are in danger of being lost, overlooked or ignored. 95-year old founder Jonas Mekas, “the godfather of American avant-garde cinema,” has guided the organization for 48 years, accumulating 20,000 films, 5,000 videos, 2,000 audio tapes and a library of books, periodicals, photographs, posters, and other materials in its archive, which is of vital significance.

Founded in 1982, this world-renowned comedy club is, at heart, a small family business. Original owner Menachem “Manny” Dworman opened his first business, Feenjon’s, in the early 1970s. It morphed into several businesses including the Comedy Cellar, Olive Tree Cafe, and Cafe Wha, adding Village Underground and the Fat Black Pussycat in later years. Now run by Manny’s son Noam, Comedy Cellar is enjoying an amazing upswing during this golden age of comedic talent. Comedy Cellar is a living legend which not only beat the odds to stay in business but flourishes while retaining its essential character.

Phil Mortillaro has been a neighborhood fixture for over 38 years. The façade of the store is made up entirely of keys, a task that took Phil about a year to complete, and there is a chair made of keys in front of the store. These might be your first clues that Greenwich Locksmith is not your average locksmith. Phil is an artist, a self-taught safecracker, and a specialist in antique keys. Phil’s son, Phil Jr, has joined the business. While he specializes in electronic access systems and other high-tech security installations, he is also an artist. Phil and Phil Jr. have turned this tiny business into a work of art, expressing the creativity for which the Village is widely known.

This lifelong artist is the father of the Greenwich Village Halloween Parade. From the age of seven, he knew he wanted to work in the theatre. At 11 he created his own puppet company, and at 17 he became a set designer. The first Village Halloween Parade in 1974 incorporated over one hundred of Ralph’s masks and giant puppets. Following the twelfth parade in 1985, Lee stepped down from his position as director, stating, “The parade has always been a celebration of the individual imagination in all its infinite variety. It continues to provide a framework for this expression and invites the participation of everyone.” His Wesbeth studio remains filled with new and old puppet creations.

Theater for the New City

Since 1971, this award-winning, four-theater complex has nurtured the creation and performance of new American theater. Crystal Field is co-founder and Artistic Director. Under her leadership, TNC has produced over 800 new plays which have garnered a Pulitzer Prize and over 43 OBIE Awards for excellence in every theatrical discipline. They are dedicated to nurturing and developing theater artists and groups whose work reflects the breadth of the American experience, and creating a space where a new vision can breathe and be nourished by a working process not subject to commercial constraints and pressure. They involve disadvantaged youngsters in theater arts in order to focus their energies towards creativity and achievement, and integrate theater arts into the academic school curriculum.

Regina Kellerman Award Winner: This 1851 building at 222 East 13th Street was rotting and abandoned for a decade and a half.  After years as a blight, it has been restored beautifully and respectfully by the Cooper Square Committee and the Ali Forney Center and returned to a productive and very necessary use – safe, quality transitional housing for homeless LGBT teenagers and young adults. This is a first of its kind development, and NYC agencies have had to rewrite the rules for it, hopefully serving as a model for others. Named for its benefactor, the Bea Arthur Residence will house and provide supportive housing services for 18 individuals. The residence is much smaller than zoning allows, and included restoration of the 19th-century building’s cornice, lintels, and brickwork.