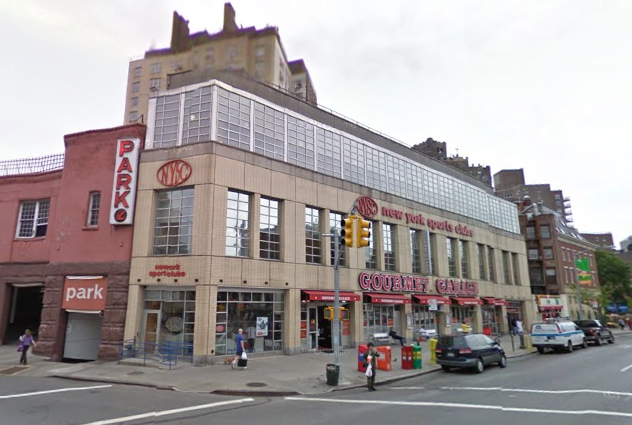 Application:
A building designed by the Liebman Melting Partnership and Terry Van Dyne and built in 1990-1994. Application is to alter the façade and construct a rooftop addition.

Status as of June 1st, 2010 (final, approved proposal): LATEST UPDATE
At the public meeting on June 1st, 2010, the architects presented a revised proposal that reduced the floor-to-ceiling height of the upper glass floors by 6 inches and raised the sill atop the lower, brick portion of the building. They also proposed to clad the rear and sides in brick as opposed to stucco (stucco had been proposed on May 11th). All Commissioners were in favor of the changes and the plan was approved.

Status as of May 11, 2010 (revised proposal):
The applicant returned to the Commission at a public meeting on Tuesday, May 11th, 2010, to present the revised design, which proposed lowering the overall height of the addition and moving it forward so it would be aligned with the street wall (note that while a setback is required by zoning, the applicant intends to apply for a variance from the Board of Standards of Appeals to mitigate this requirement). The applicant proposed maintaining the existing facade, but making the third floor (currently glass) brick to match the lower floors. The applicant also proposed adding two glass stories to the top, which would be configured in a similar fashion to the existing glass 3rd story. There would be a stucco penthouse at the top, which would be set back and would not be visible from Seventh Avenue South. The rear of the building would be clad in stucco.

At the May 11th meeting, the Commissioners indicated that they liked the general direction in which the proposal was headed, and appreciated that the applicant was “working with the existing building‚” rather than refacing it. However, while they thought the proposed height and massing was alright, they thought that the proposed proportion of glass-to-masonry was awkward and should be revised. They also thought that since the secondary facades would be visible from multiple angles, they should be designed more as principal facades. They were also concerned about the proposed use of so much stucco, which they thought was an inappropriate choice of material for the Village.

The Commission asked the applicant to incorporate their comments into a revised design, then return for another public meeting (June 1st), at which the Commission will officially vote to either approve the application, deny the application, or again ask the applicant to return at a later date with further revisions. GVSHP will update this site as soon as we know the date on which this next public meeting will be held. Please note that while public attendance is welcome at all public meetings, public comment is not (public comment is only allowed at public hearings).

Status as of March 3rd, 2009 (original proposal):
A public hearing on this application originally took place at the Landmarks Preservation Commission on Tuesday, March 3rd, 2009, at which the applicant proposed refacing the facade of the building and adding 4 glass stories to the top, which would have been set back from the street wall. On that date, the Commission did not vote to approve or deny the application, but rather asked the applicant to return at a later date with revisions. Many of the Commissioners expressed discomfort with the proposed design, questioning its relationship with the existing building, the district, and Seventh Avenue South, which many described as “predominantly low-rise.” Several Commissioners indicated they would entertain the idea of an addition, albeit a smaller one, with one Commissioner referring to one “half the size,” of what was proposed and another to “one or two stories‚” as being potentially acceptable.