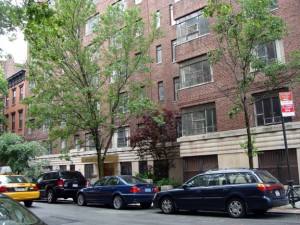 Application:
An apartment house designed by H. I. Feldman and built in 1940- 1941. Application is to modify a masonry opening and alter the areaway.

Note that a separate application to replace windows on this building was approved June 1st, 2010.

Status as of October 19th, 2010: LATEST NEWS
At the October 12th public hearing of the Landmarks Preservation Commission, the Commission voted to approve the proposal.

Status as of October 12th, 2010:
At the October 12th public hearing of the Community Board 2 Landmarks & Public Aesthetics Committee, the applicant presented plans that will be heard at the Landmarks Preservation Commission on October 19th. The plans are to alter the existing areaway ramp and to replace an existing door with a window.