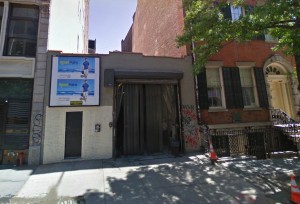 NoHo Historic District Extension
Between Lafayette Street and the Bowery

Visit our Merchant’s House Museum advocacy page for more information on how you can take action.

1) From the LPC agenda: A garage and repair shop designed by Herman Kron and built in 1945-46. Application is to demolish existing building and construct a new building. Zoned M1-5B. (Village Preservation note: This building is located next to the Old Merchant’s House, a designated New York City Landmark.)

2) Photos of the application:

3) LPC Designation Report: An architectural and historical description of the building is available in the designation report.

5) Receive updates by email: Please click here if you would like Village Preservation to email you when there are updates to the status of this application.

—- STATUS OF THIS APPLICATION —-

Latest News – April 8, 2014: Application approved at today’s LPC public meeting (video), and is now closed (see photos of approved design under ‚ÄúPhotos of the application‚Äù above). This was the third public meeting held for this new building proposal. Overall, the commissioners felt the design was bland, but ultimately they found it appropriate to the district as an infill building. Commissioner Perlmutter was the only one to vote against the project (it was approved 6-1), citing its overall drab design as something that should not be approved. The commissioners once again stressed their concern for the structural integrity of the neighboring Merchant’s House.

April 4, 2014: Third public meeting has been scheduled at the LPC, 1 Centre Street, 9th floor north, public hearing room at approx. 10:45 AM. The public cannot testify at this time, but is welcome to attend. The applicant will present revisions based on the commissioners’ comments from the last public meeting held on February 11, 2014.

February 11, 2014: At today’s second LPC public meeting for this application, the commissioners took no action. Instead, they asked that the applicant work on additional revisions to the building’s facade (including re-working the proportions to accentuate the base and top floors and to reconsider the materials) and to its rear (rethinking the perforated metal shutters and eliminating the lights, which did not feel appropriate to this district). They also continued to stress their concerns for the structural safety of the Merchant’s House and for its delicate interior plasterwork in particular. Overall, they seemed okay with the reduced height of the building, which was taken down one floor (from 100‚Ä≤ high to about 91‚Ä≤), as they feel it helped to differentiate it from its neighbor at no. 25 and provided a better transition to the Merchant’s House. They also liked the design changes at the side wall considering it will always be exposed due to its adjacency to the Merchant’s House. The applicant will work with LPC staff and present again at a future public meeting, date TBD.

February 7, 2014: Scheduled for an LPC public meeting on February 11th at 2:05pm; Municipal Building, 1 Centre Street, 9th floor public hearing room. The public cannot testify, but you are welcome to attend and listen to the presentation and commissioner discussion. Please arrive at least a half hour early to account for scheduling changes.

March 12, 2013: At today’s public meeting the LPC took a vote of no action on this application and requested that the applicant make further revisions before returning to a future public meeting, date TBD. This means that construction of a new building cannot happen at this time. Though the LPC commissioners felt that the structural plan was better than what was proposed at the public hearing, they requested further details and thought about how new construction will affect the neighboring 1832 Merchant’s House Museum and its delicate interior plasterwork. They also felt that the height of the proposed new building should be brought down a story or two so that it would not overwhelm the Merchant’s House and that it would better recall the varying building heights typical of the historic district’s streetscapes. They also asked that the design of the building be re-thought (it was the same design presented at the public hearing) as it looks more like a 1960s office building than one that reflects the character of NoHo. They did not approve of the tinted glass, the glass spandrels, or the cast stone quoins and requested that high quality materials be used considering its adjacency to the Merchant’s House. They also felt that there should be a tripartite arrangement to the design of the facade to reflect the historic architecture of the area. The design at the rear facade, which the applicant said would mirror the front, is also an area that the commissioners would like to see better defined (and differentiated from the look of the front).

March 8, 2013: This application is scheduled for a public meeting on Tuesday, March 12th at the LPC, 1 Centre Street, 9th floor north, public hearing room. The applicant will present a revised proposal based on comments from the public hearing. GVSHP has not yet seen the plans, but will be present at the LPC to take notes and, if possible, photos of the updated plans. Please note that no public testimony is taken at this meeting, but the public is welcome to sit in and listen to the presentation.

September 12, 2012: This application was heard at the LPC on September 11th, but the Commission did not take a vote. The LPC will schedule a public meeting at a future date, TBD. Sign up for our email alerts and we will notify you of this meeting date as soon as it is posted. The public hearing lasted about two hours and the LPC heard testimony from elected officials (including Councilmember Rosie Mendez), preservation advocacy groups from around the city, representatives of the Merchant’s House, and friends of the Merchant’s House. No one testified in support of the new building proposal.

September 7, 2012: This application will be heard at 3:45pm at the LPC on Tuesday, September 11th. We recommend you arrive by 3pm to ensure yourself enough time to get through security and to submit speaker cards if you wish to testify. Please note that the LPC enforces a strict 3-minute time limit for each person who testifies.

August 24, 2012: We have received email confirmation from the LPC that this application’s public hearing has been postponed until September 11th. The time for the hearing will be available on the LPC website on the Friday before the public hearing, or you can sign up for email alerts from Village Preservation to find out the latest on this application.

August 20, 2012: This application is scheduled to be heard at the LPC on Tuesday, September 4th. The time for the hearing will be available on the LPC website on the Friday before the public hearing, or you can sign up for email alerts from Village Preservation to find out the latest on this application.

July 19, 2012: This application has been laid over at the LPC and will not be heard on July 24th. A new hearing date has yet to be scheduled, but you can sign up for email alerts and Village Preservation will notify you when a new hearing date is announced.

July 6, 2012: This application is scheduled to be heard at the LPC on Tuesday, July 24th. The time for the hearing will be available on the LPC website on the Friday before the public hearing.

June 15, 2012: This application has been laid over at the LPC and will not be heard on June 19th. A new hearing date has yet to be scheduled, but you can sign up for email alerts and Village Preservation will notify you when a new hearing date is announced.

June 1, 2012: This application is scheduled to be heard at the LPC on Tuesday, June 19th. The time for the hearing will be available on the LPC website on the Friday before the public hearing.

May 16, 2012: Community Board 2 heard this application for a second time on May 14th. It is next scheduled for a public hearing at the Landmarks Preservation Commission on Tuesday, June 5th. Public testimony is welcome at this time. Hearing time will available on the Friday before the hearing.

May 8, 2012: This application has been laid over at the LPC. The applicant has been asked to present their proposal for a second time at Community Board 2 on Monday, May 14th so please attend if you wish to comment on the application. It will be held at 6:30pm at Our Lady of Pompeii Church, 25 Carmine Street, Father Demo Hall. A new public hearing date at the LPC is still to be determined.

May 1, 2012: This application was presented at CB2 on April 30th. It is next scheduled to be heard at the LPC on May 8th at 11:30am, and we recommend that you arrive about 30 minutes earlier. Public testimony welcome.

April 27, 2012: This application is scheduled to be heard at Community Board 2 on April 30th. Public testimony welcome.